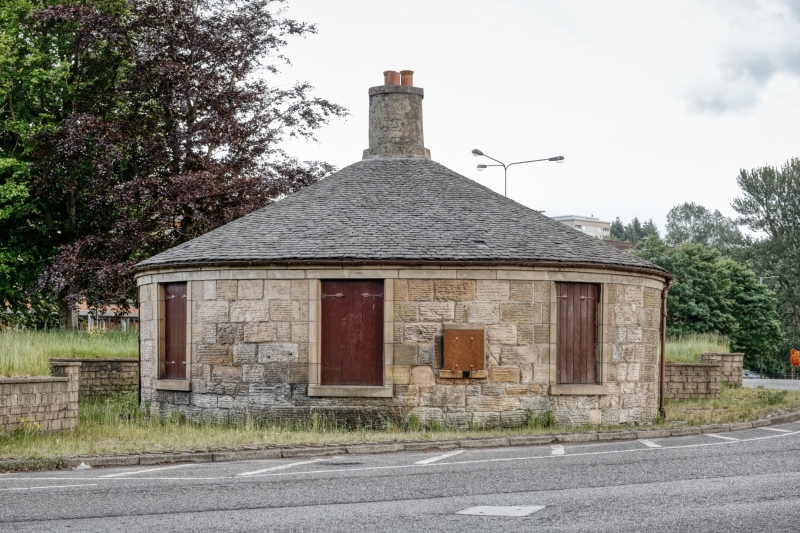 The Pollokshaws Tollhouse, built circa 1820, is a good example of a purpose built earlier 19th century toll house demonstrating a simple well executed design and a rare surviving example of a building of this age in the area which was largely redeveloped in the 20th century. It remains largely in its original form and makes a good historic contribution to otherwise later 20th century the streetscape.

Pollokshaws was an independent weaving settlement originating from the early 18th century to the south of Glasgow. It was an important crossing place of two major roads: the Glasgow to Irvine Road and the Rutherglen to Govan Road. The Turnpike Act was introduced 1822 to ensure a good network of roads to encourage trade and the Pollokshaws Tollhouse was built around this time on this key road junction. Pollokshaws retained the sense of an independent burgh for some time despite being merged with Glasgow in 1912. From 1961 to 1974 a major planning redevelopment and slum clearance of the area, including work by Glasgow-based architects, Boswell, Mitchell and Johnson, altered the character and it became largely a mid 20th century suburb of Glasgow.

The Toll House is the only surviving example of this building type in the Pollokshaws area, others were demolished as part of the planning and road improvement schemes in the 20th century.

After the tolls were abolished in the late 1880s the Toll House had various different uses ranging from a carriage hirer, a public house and used as a private dwelling up until the late 1950s. In 1989 it was in use as a council store, currently boarded up and vacant (2013).