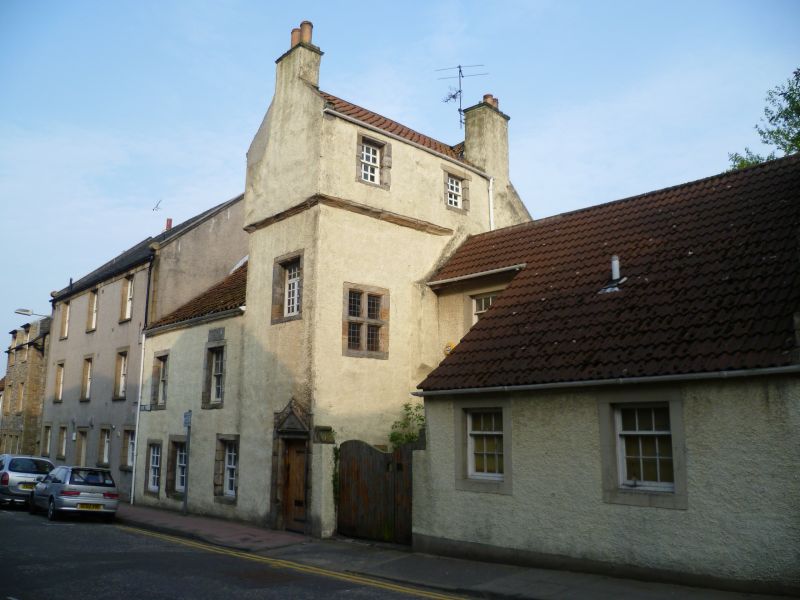 This house, restored in 1964-1966 by former owner Peter J Findlay, is the best-preserved example of 17th century domestic burgh architecture in Inverkeithing and is a pre-eminent example of its type, similar to some of the best buildings in Culross (in particular The Study - see separate listing). Thomson's House consisted originally of a 2-storeyed oblong main block with a stair-wing at the south-west end, these parts forming the back and one end of a lean-to, to which a 3rd storey has been added (RCAHMS). The unusual lean-to roof is locally known as a 'toofall' and is also seen at Rosebery House (see separate listing).The 2-storey front section of the house to the left of the main door was also a later addition (date unknown). A merchant's mark and the initials IT and BT represent John Thomson, burgess, and his wife Bessie Thomsoun. Partially obscured, the inscription refers to Psalm 127. The extension to the S (circa 1966) replaced a gap site which was formerly the site of the Old Music Hall (erected circa 1859 and burnt 1957). The granite columns to the back garden are said to have come from one of the large insurance companies (now demolished) on Princes Street, Edinburgh.