A Category B Listed Building in Stewarton, East Ayrshire 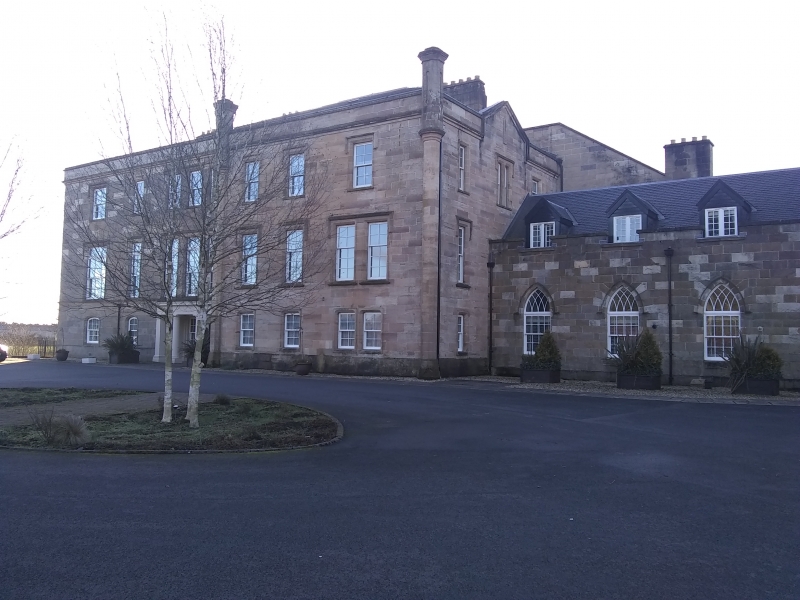 Lainshaw House is one of the principal country houses in the Stewarton area. It has a complex building history and its external appearance is now largely of the 19th century. An unusual combination of the Classical style with some Tudor-Gothic details such as hoodmoulds and slender angle turrets, Lainshaw is an important part of the area's architectural history.

Situated on the banks of the River Annick, it is likely that a residence existed at this site since the 15th century. The exterior of the present house dates predominantly from the early part of the 19th century and the majority of the building was constructed by the first William Cunningham of Lainshaw, who died in 1849. An earlier, 18th century section of the house can be seen at the rear of the house and recent archaeological work suggests that small sections of a previous 15th or 16th century tower house may remain within the present house (RCAHMS).

The 10th Laird of Lainshaw, Sir Walter Montgomerie-Cuninghame, lost a fortune as a result of the American War of Independence. The estate was then bought in 1779 by William Cunninghame, a tobacco merchant from Kilmarnock. On acquiring the Estate, William spent a great deal of money extending the house and the grounds and the earlier section to the rear of the house may date from his occupancy. His son, William Cunningham the Younger then inherited the Estate in 1799. He remodelled the house extensively during the early part of the 19th century and it is recorded that an additional wing was begun in 1824. This may be the single-storey Gothic wing. It may be that the majority of the house was constructed in 1833. He died in 1849 and the house passed to his younger half-brother. The house remained in the family until it was bought by the Local Authority in 1947 and became a care home for the elderly. Originally situated within large estate grounds, the development of the town of Stewarton through the 20th century has meant that Lainshaw now sits close by the town and recent 21st century houses are nearby. The interior was previously damaged by fire. It has recently been converted into flats and some chimneypieces are though to remain (2009).