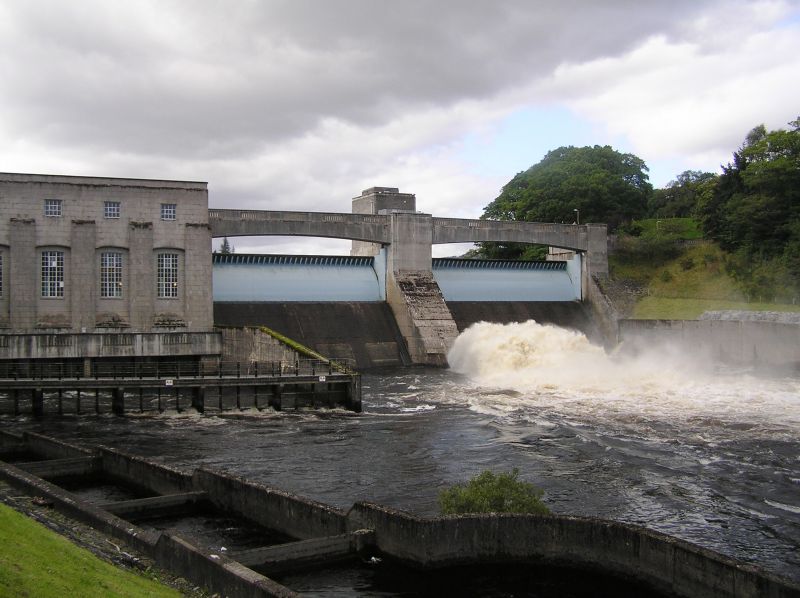 Pitlochry dam and power station is an outstanding example of an early development by the North of Scotland Hydro Electric Board (NoSHEB) in a bold modernist design by Harold Tarbolton. The station is set in a prominent location on the edge of Pitlochry and the walkway oversailing the drum gates is used as a public bridge. The building illustrates the intention by NoSHEB to ensure that their interventions had a positive impact on the areas where they were set, through the use of high quality design and materials.

Pitlochry power station is the archetypal example of the bold modernist phase of designs by NoSHEB and the use of modern materials such as pre-cast concrete blocks expresses the dynamism of the industry at this time and of the new society that the board hoped to create in the Highlands by brining electricity to remote communities.

The turbine hall was originally designed with 2 Kaplan turbines each capable of generating at 7.5 megawatts. The station operates primarily as a run-of-the-river scheme with some pondage provided by Loch Faskally. The station has a relatively low head (with the turbine hall integrated into the dam) of 15 metres and produces an average of 60 million units per year.

Pitlochry power station forms an important component of an early example of one of the major post-war hydro electric developments by the NoSHEB, expanding a scheme developed during the 1930s (see separate listings for Tummel Bridge and Rannoch power stations). The scheme played a key role in the realisation of the social agenda of NoSHEB by providing power for export to the populous central belt the profit from which subsidised other schemes to supply power to remote north highland communities and stimulated economic regeneration. This commitment saw the development of schemes in locations such as Loch Dubh near Ullapool and Storr Lochs on Skye. Johnstone's social aspirations and wider wishes to reinvigorate the economy of the Highlands were behind these projects which were a key part of the NoSHEB development plan.

All of the developments carried out by NoSHEB were subject to parliamentary approval and objections on the grounds of scenic amenity were common. In order to meet these objections the board appointed a panel of architectural advisers which included Reginald Fairlie (1883-1952), James Shearer (1881-1962) and Harold Ogle Tarbolton (1869-1947), appointed in 1943. Initially the role of the panel was to adjudicate on competition entries for designs, but by 1947 it had become one of designers. The panel had little control over the functional form of the buildings, as they left this to engineers, but they did influence the appearance and the style of the designs. The design of Pitlochry Power Station is typical of Harold Ogle Tarbolton's bold designs for NoSHEB as can be seen in his work at Sloy (see separate listings). This contrasts with the later approach of the board after Tarbolton's death in 1948, with the focus on the integration of buildings with the landscape by the use of vernacular features.

Harold Ogle Tarbolton became involved in the design of hydro electric infrastructure for NoSHEB late in his career (he died in 1947), but he had been a member of the Amenity Committee which considered the work carried out under the Galloway Water Power Act of 1929, acting as advisory architect for the Galloway schemes and designed the associated housing schemes. As a consequence of his experience in Galloway and his original training as a civil engineer he was appointed to the North of Scotland Hydro Electric Board alongside James Shearer and Reginald Fairlie. His two most prominent commissions for the power stations are those at Loch Sloy and Pitlochry (see separate listings). Both of these designs are characterised by confident use of modern classicism and bold application of pre-cast concrete panels.