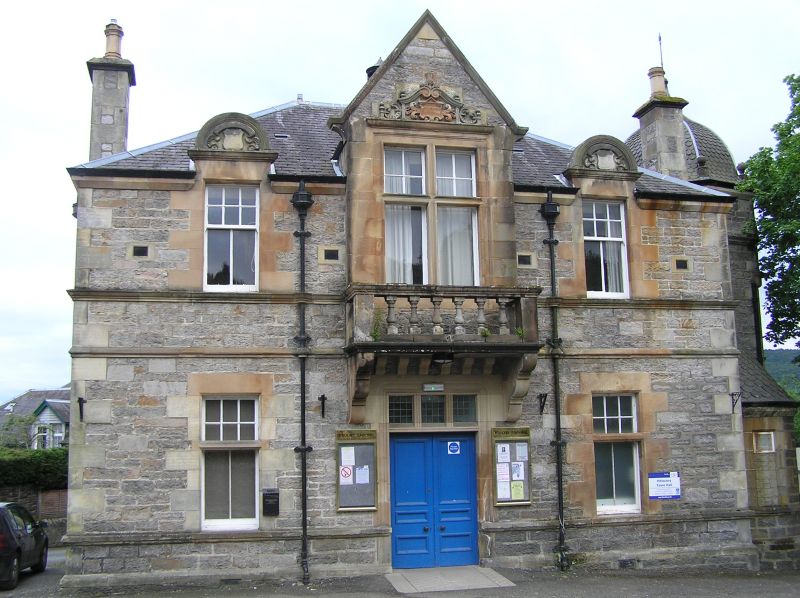 W ELEVATION: advanced gabled entrance bay to left of centre with door and moulded doorhead at ground, hoodmoulded round-headed window with deep bracketted cill at 1st floor, and further door on return to right at 1st floor accessed from forestair; engaged polygonal ogee-roofed tower in penultimate bay to left with small window at ground and 2-light transomed window above giving way to moulded datestone and pediment; squat round tower with 2 tiny windows in part-blocked openings adjoining at outer left. Hall set-back to right with 4 large windows with panelled door to fire escape, and lower advanced bay with window to outer right and pedestrian door to ground.

E ELEVATION: taller bay to outer right with 2 windows to left (that to outer left with moulded windowhead) at ground and further window with piended dormerhead breaking eaves to centre above, wallhead stack to right. 4 large windows to recessed bays of hall on ground falling to left, that to outer left over door to raised basement, steps up to door with 4-part fanlight in penultimate bay to right, and window to each floor at outer right. Lower piended bay to outer left with 2 windows close to ground and further window to centre above.

S ELEVATION: door to centre with windows in flanking bays, further window beyond to right and small window to left, tall window in bay to left at 1st floor with smaller windows to centre and outer right.

Pitlochry Public Hall was a competition subject judged by Charles Gourlay of Glasgow, with Pitlochry architects John Menzies, taking second place, and John Leonard, third. The site was donated by Mr A E Butter of Faskally, with funds raised by public subscription and gifts including 150 guineas from Mr Sandeman of Fonab. The foundation stone was laid on 18th May 1899 by Sir Alexander Muir Mackenzie of Delvine. Items of interest were placed beneath the stone, including "coins of the realm from a sovereign down to a half-penny" and copies of the 'Perthshire Advertiser', 'Scotsman' and the 'Dundee Papers'. A strong Masonic presence supported the ceremony which was concluded by Mr Hugh Mitchell presenting Sir Alexander with "the rosewood mallet and beautiful silver trowel with which the stone had been laid". The Hall opened in 1900, with cinema showings commencing in 1919. Passing into council care in 1947, management of the building for Perth and Kinross Council has rested with Pitlochry Leisure Centre since 1991.