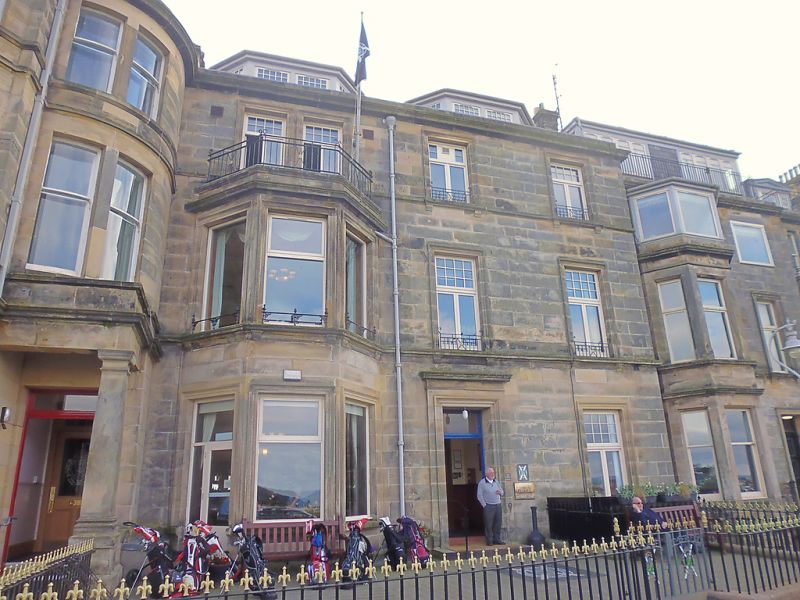 Part of a group with Forgan House, The Links and Pilmour Links; Rusacks Hotel; 2-4 Golf Place with 1 Pilmour Links; 12-24 Golf Place; 3, 6, 7, 16-18A and 19 Pilmour Links; 7-8, 11-12, 13, 15-16, 18 The Links (see separate listings). Built at the end of the 19th century, Links House has served as the clubhouse of the St Andrews Golf Club since 1933. The house has a notably broad and well-proportioned frontage for a terrace house, indicating that is must have been commissioned by a person of considerably standing. It is part of an irregular terrace of large town houses overlooking the 18th green of the celebrated St Andrews Old Course and across from the Royal and Ancient Clubhouse (see separate listing). Internally, the wide cantilevered timber staircase is worthy of particular note, dominating the central core of the building and rising to attic level. Alterations to Links House and its later conversion to a golf club house were among William Walker and Frank Pride's earliest commissions. This local architectural practice went on to design a significant number of housing schemes for Fife County Council, amongst various other works in the region. The St Andrews Golf Club began as The St Andrews Mechanics Golf Club in 1843, formed by 11 local tradesmen. By 1854, the name had changed and one of the foremost golfers of his day, Alan Robertson was captain. 'Old' Tom Morris, the world famous golf professional, club manufacturer and Custodian of St Andrews Links, was also an early and long-time member. He purchased the shop premises at No 7 and 8 The Links (see separate listing) in 1866. Early golfing societies and clubs tended to meet at a hotel or a members¿ house near to their course. Official clubhouses became increasingly common in Scotland from the mid-nineteenth century onwards as the game¿s popularity increased. The St Andrews Golf Club's first clubhouse, in nearby Golf Place, was purchased in 1905. In 1932, the club's committee seized the opportunity to purchase Links House, overlooking the 18th green of the Old Course, for the sum of 2700 pounds. After its conversion to a clubhouse, at a further cost of 2000 pounds, the new premises were formally opened on 20th July, 1933. St Andrews is recognised by international golfers and historians as the cultural home of golf. Early versions of the game were being played in Scotland during the middle ages and it is known to have been played on St Andrews Links continuously from at least the mid 16th century. The right of the people of St Andrews to play golf on The Links was officially recognised in 1552. By 1691, the Regent of St Andrews described the town as "the metropolis of golfing" and a letter of 1712 shows that students could be given a dispensation to play. Scotland has produced many pioneering names in golf including five times Open Championship winner and course architect James Braid (1870-1950), and the aforementioned Old Tom Morris (1821-1908). The Scottish Golf Union have indicated there are currently around 550 golf courses in Scotland with a total membership of approximately 236,000. List description updated as part of the sporting buildings thematic study (2012-13). Minor updates to supplementary information, 2019.