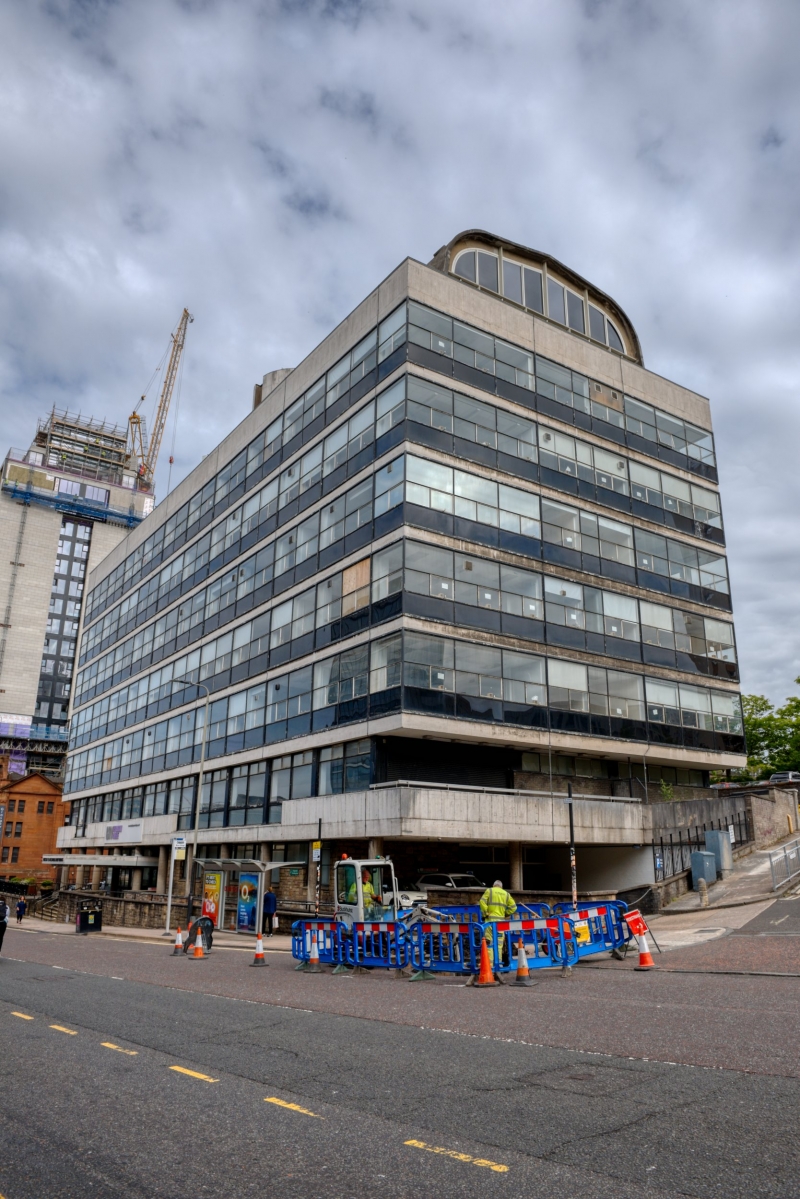 Peter Williams, of Wylie, Shanks & Underwood, 1959-1963. 7-storey with rooftop structures, 22-bay, rectangular-plan, flat-roofed, horizontally-proportioned college building with Le Corbusier style elements of rooftop gymnasium and plant, and curtain wall glazing wrapping around all floors above ground. Bull-faced rubble base (with brick to side and rear) jettied onto columnar concrete pilotis and above 1st floor at E and W; bands of Travertine marble slabs and vitrolite. Wishbone-shaped gymnasium with portholes.

W (NORTH FREDERICK STREET) ELEVATION: 9-bay above ground, horizontal banding as above, but with balcony to 1st floor.

N AND E ELEVATIONS: largely as S and W but with minor differences at ground.

An important example of post-war tertiary educational architecture and an integral part of Glasgow Corporation's re-establishment of educational facilities as part of the rehabilitation of the city-centre. Built as Stow College of Distributive Trades for Glasgow Corporation Education Department. The earliest drawings date from July 1957 but Dean of Guild approval was not granted until 27th February, 1959. The building was officially opened by Lord Craigton on 24th May, 1963. The design bears comparison with Le Corbusier's Unité d'Habitation, Marseille 1947-53, with pilotis and roof terrace housing gymnasium and sculptural ventilator stack as well as horizontal concrete bands (replaced here by vitrolite). Plan form and functionality are, however, challenged by today's educational requirements, with areas no longer functioning well as confined working spaces lead to restrictions in class size and difficult working practice. Energy efficiency, an important issue with so much glass retaining heat in summer and losing same in winter, is another issue although some perforated metal ceiling tiles with heating elements sandwiched between insulation have been retained. The architect, Peter Williams (1922-2004) was a partner in Wylie, Shanks & Wylie, subsequently Wylie, Shanks & Underwood, from 1954 until 1974. The firm, which had specialised in industrial architecture, branched out to educational, medical and commercial, as well as exhibition design, during the 1950s. Williams was also responsible for the nearby Glasgow College of Building and Printing (listed separately) and there is an architectural dialogue, in terms of skyline elements, between the two. He was also responsible for the Norwich Union building, 174 St Vincent Street, Glasgow (1967), factories for General Motors at Motherwell and Peterhead, and for the teaching block for the Glasgow Dental Hospital (1970), Renfrew Street, Glasgow. Much altered during refurbishment of 2008, including complete reconfiguration of reception area, with installation of glass screens, a new escape door slapped through the W gable, and removal of partitions on 1st floor to enlarge refectory, new wall and floor coverings and doors. Description updated 2011.