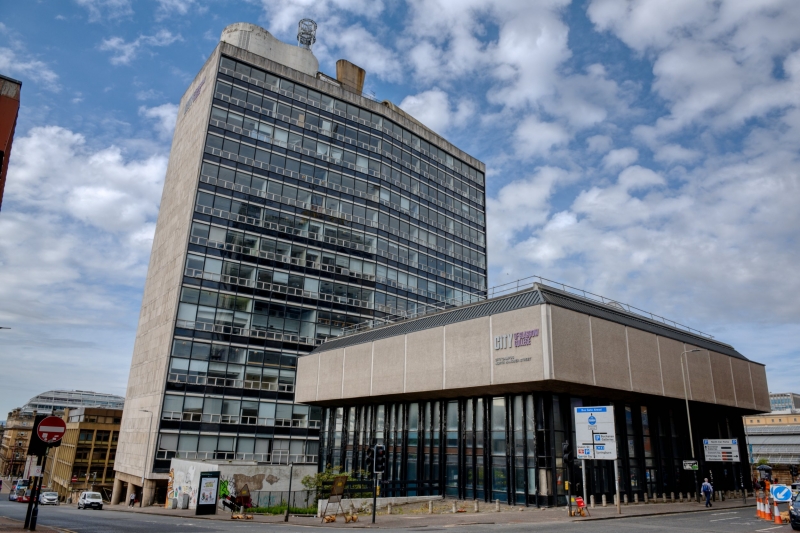 N ELEVATION: as S above ground but with some taller bays toward centre of 3rd, 4th and 5th floors (making 2 floors). Podium/Millenium block (see below) projecting at ground.

INTERIOR: little structural alteration to tower interior arrangement, with partitions retained much as original. All doors above ground level of tower subsequently replaced, some with like-for-like replacement glazed timber. Original terrazzo lined staircase with timber handrail set into marble-clad baluster; 3 original lifts. Flying staircase with concrete spine, timber treads and timber an steel balustrade between 13th and 14th floors. All other linings and finishings above ground level are non-original. Foyer has flooring of grey and black marble slabs, pine lined ceiling and wall linings of pine, black vitrolite and natural stone, all original. 2 original glazed partitions to the E of foyer have been removed and the foyer extended to the E to incorporate the service lift, formerly external. The reception desk has been modified (post-2002) with a new curved fronted counter.

This building is of outstanding importance owing to the high calibre of design and construction as well as retention of original features, including the chequer-board glazing pattern and rooftop terrace with principal sculptural objects intact. Significantly sited at the hub of urban Glasgow, the distinctive vocabulary of Le Corbusier's modular system for urban living is skilfully translated into a technologically advanced educational establishment. The significance of this building and the nearby Central College of Commerce can be justifiably considered alongside a limited international cast including Gio Ponti's Pirelli Tower, Milan (1956-60) and the LCC's Alton Estate, London (1952-60), the latter described as "one of the great statements of modern architecture in London" by Elain Harwood (sections 9.18). Built for Glasgow Corporation as Stow College of Building and Printing, completed 11th September, 1964. Dean of Guild approval was granted on 15th August, 1958 with the first drawings submitted in 1957. Design similarities with Le Corbusier's Unité d'Habitation, Marseille of 1947-53, make it likely that Peter Williams, architect of the similar Central College of Commerce (listed separately) was involved but the majority of drawings are initialled by his colleagues 'CJW' and 'RHMcE'. Originally conceived as an 8-storey block with the College of Printing subsequently placed above (although clearly early in the planning stage), the building was originally run as two separate colleges. Drawings for the Podium/Millennium block, containing assembly hall, canteen, assorted studios, theatre and another gymnasium are initialled 'AB'. Overt nautical references can be translated as a double funnel, prow (former gymnasium), funnel and viewing platform on the rooftop, with the curtain walls as sails. Latterly, the gymnasium has been converted to a TV studio. Due to deterioration of the opening mechanisms, some windows have been welded shut (for safety reasons) while others have been replaced with galvanised steel (re-using the frames where possible) and retaining the distinctive original glazing pattern. The 4th floor height changes have been incorporated to allow extra light into studios and could conceivably reflect yet another feature of the Unité d'Habitation's commercial deck. The perforated ceiling tile heating system employed in the Central College of Commerce was also used in the nearby Central College of Commerce at 300 Cathedral Street - separately listed. Description updated 2011.