A Category B Listed Building in Peebles, Scottish Borders 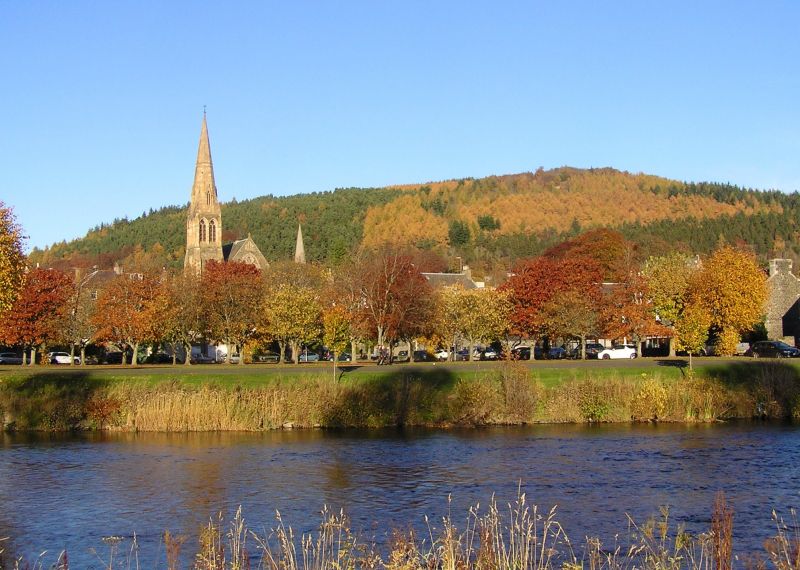 INTERIOR: renovations (circa 1977) including ground floor carpeted with stacking chairs replacing pews. Allan computer organ replaced the pipe organ and removal of screen supported it, allowing apse to be opened and incorporated into main body of the church. Large cross (made from Kauri pine from a St Andrew's Church pew) hung in the apse, above a large tapestry. Pulpit and font from St Andrew's Church. Vestibule renovated and sanctuary rearranged (circa 1977).

Ecclesiastical building still in use as such. The Leckie Church was built as a memorial to Rev. Thomas Leckie, born in Glasgow in 1758. His father died when he was 8, and although Thomas did manual work, he gained enough education to study divinity at Glasgow University. He became a licensed preacher, being ordained the first minister of the Associate Burgher Congregation in Peebles in 1794, at a stipend of ?65 per annum (by the time of Leckie's death, the congregation neared 400). There was no manse but land was bought and a house erected (the land is now where the church is). Here the Leckies raised 10 sons and 3 daughters. Many years later, the remaining family gathered in Peebles for the funeral of Charles Leckie, the Rev.'s ninth son; a family friend suggested donating the family land near Tweed Green to the congregation so they could build a church in memory their father. The brothers decided to donate the land and fund the church also, which together with an adjoining strip of land cost ?8000. The newly completed church's centre, side and gallery pews sat about 400 people. A dais at the N end held an organ with choir stalls to the east, whilst a large wooden screen stood in front of the apse and supported the pipe-work of the organ. The attached hall accommodated around 80 people. In 1900, there were 3 Presbyterian churches in Peebles but by 1918 St Andrew's and the West Church merged, taking the name of the former but the building of the latter. The Great Union of the Church of Scotland and the United Free Church took place in 1929, so St Andrew's and the Leckie Church each had their own parish within the Burgh. By 1977, this building became the home of the United St Andrew's Church; but the restrictive deed by which the property is held by the congregation demands that the church is still referred to as "The Leckie Memorial Church". The joining of two congregations rendered the interior too small for general use, as was the adjacent hall. A flexible layout was installed for use as a church or hall (see INTERIOR). A second hall and committee room was provided in the 1980's with the purchase of an adjacent former bakehouse; it was converted at a cost of ?12,000 with the labour provided voluntarily.