A Category B Listed Building in Drymen, Stirling 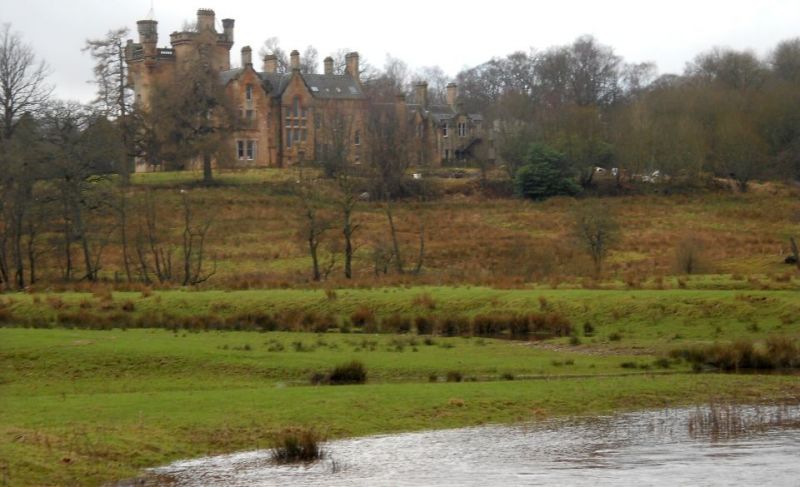 E ELEVATION: 6-bay (main block). 4-bay tower section to left; comprising 3-bay projecting section and single bay set back to right. Projecting section canted to lower 2 floors (mullioned and transomed quadripartite to each bay at ground; mullioned bipartite to central and left bays at 1st floor); 2nd floor canted to left side only (window to this and central bay); rounded arris to right bay (with blind hood-moulded arrowslit and one to right return), corbelled out with grotesques in high relief flanking corbelling; 3rd floor corbelled out at left bay (with small Tudor-arched window with carved spandrels and moulded hood-mould) with high relief grotesque to right of corbelling; window to central bay; breaking-eaves gable with circular panel with pierced trefoil to left bay; circular-plan bartizan with crenellated parapet at arris of right bay; small niches with cusped heads at outer cardinal points; balustraded parapet along eaves, including to right return. Slightly taller section of tower with crenellated parapet set back to bay to right; window to each floor (partially obscured by later fire escape); that at ground transomed bipartite with pointed head; right return of taller section of tower visible above roof; window to centre and one to right; central one hood-moulded with corbelled out breaking-eaves gabled canopy with truncated trefoil panel at head; circular-plan bartizan at right arris. 2-bay section of main block adjoins to right; window to each floor to each bay; that to left at ground floor mullioned and transomed sexpartite; that to right transomed bipartite; mullioned bipartite to left of 1st floor; finialled breaking-eaves gabled dormers to attic, carved shield set within panel at head of each.

Mainly 2-pane timber sash and case windows to original block. Grey slate roofs. Moulded coping, friezes and chamfered upper arrises to stacks; pair of gableheads at W end of main block; ridge stack to S side and 2 to N; 2 wallheads to tower; gablehead and ridge stack to N side of single storey and attic service wing; corbelled wallhead and nepus stack to N side; round cans.

An imposing late 19th century baronial mansion with some fine detailing (notably to tower). It was built for Thomas Brown, a Glasgow merchant, on the site of the former much smaller 'Endrickbank House'. The 1884 building appears to have survived far more intact than is suggested by contemporary newspaper accounts of a major fire that engulfed it in 1917. It is likely that much of its original interior was lost at that time. At the time of the fire it belonged to Henry Christie, a calico printer, who owned it until the 1940's when it passed into the hands of the Glasgow Western Hospital Board. It was used as a nurses' home until Killearn Hospital closed in 1972. For much of the 1970's it was in use as a training and conference centre for British Steel and is currently (2000) in use as a nursing home. The additions postdate the 1966 OS map. See separate list descriptions for Entrance Lodge and Gateway.