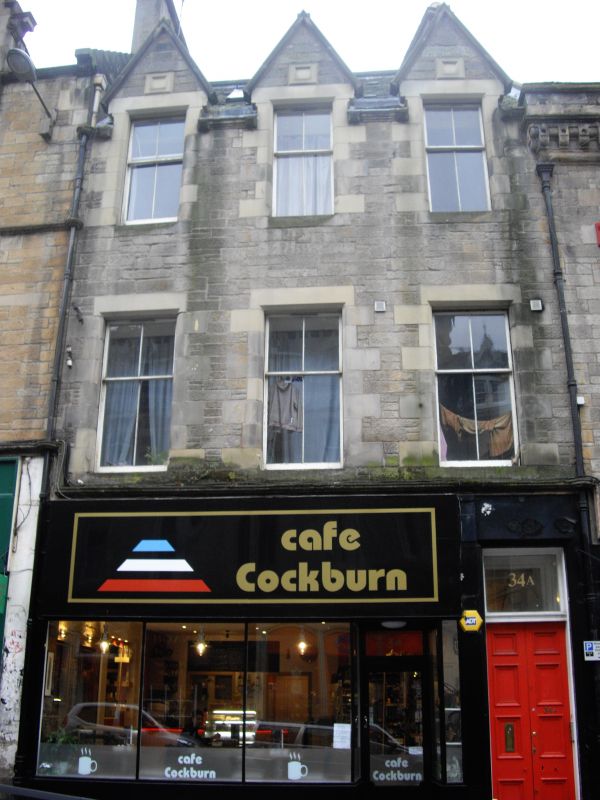 Listing Name: 34 and 34a Cockburn Street

A Group comprises 1-63 (Odd Nos) and 2-6 and 18-56 (Even Nos) Cockburn Street. No 34 was considerably simplified from Peddie and Kinnear's drawing as built. Known briefly as Lord Cockburn Street, Cockburn Street was named after the doyen of conservationists, Lord Cockburn, who died in 1854. It was built by the High Street and Railway Station Access Company, under the Railway Station Acts of 1853 and 1860, to provide access to Waverley Station from the High Street. The serpentine curve of the street (anticipated in Thomas Hamilton's Victoria Street) gives a gradient of not more than 1:14; James Peddie and Henry J Wylie were the engineers. One of the aims of the design was to conceal the diagonal line of the street from Princes Street. A watercolour perspective drawing of the street by John Laing, published in THE BUILDER of 1860, shows how this was to be achieved. Stylistically, the intention was 'to preserve as far as possible the architectural style and antique character of the locality.' Peddie and Kinnear's Cockburn Street designs are an innovative adaptation (much imitated later) of the Scots Baronial style, previously used by Burn and Bryce in country houses, to the urban situation, with shops and tenements enlivened by crowstepped gables, corbelling and turrets.