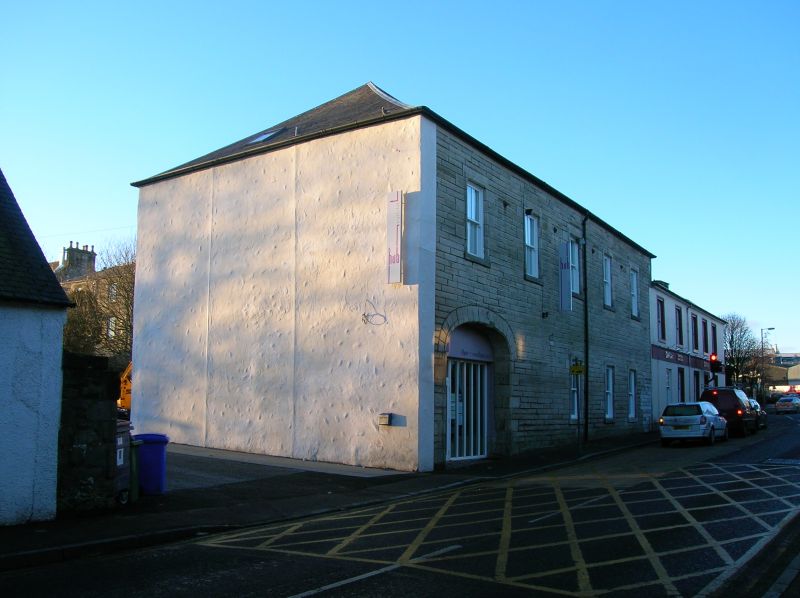 Circa 1870. 2-storey 5-bay former granary (not currently in use, 2008). Squared and coursed, stugged yellow sandstone with raised margins and chamfered openings; rubble sandstone to side and rear. Off-centre door opening (now boarded) to ground; 2 windows to right and further door opening (boarded) to outer right. Segmental-arched pend to outer left, leading to rear. 5 single windows to 1st floor. Cast-iron lintel to pend at rear and to loft opening above.

Built circa 1870 and located next to the Cross, this former granary is important part of the townscape of Stewarton and is a rare survival of a town granary. The Cross, 'with other roads radiating from it, was a convenient gathering centre for the surrounding rural area' (Strawhorn and Boyd p483). The trading of grain (bread was produced in the adjoining bakery) would have taken place from the premises, performing an important role in the town. Together with the adjoining 2-6 Lainshaw Street and 2-6 Vennel Street (separately listed), the buildings were known as the Commercial Buildings and were owned by Thomas Young & Sons, grain merchants. Young, at one time the provost of Stewarton, lived with his family in the townhouse above the shops at 2-6 Lainshaw Street. The bakers shop was on the corner.

By the 1950s increasing industrialisation of food production meant that many bakeries began buying in bread from central bakeries located in the cities. 8 Vennel Street is a survivor from the period when food was produced and sold locally. Lydall and Gillies the bakers took over the business from the baker Robert Boag prior to World War II and the Gillies family were sole owners of these buildings from 1947 until 1999.