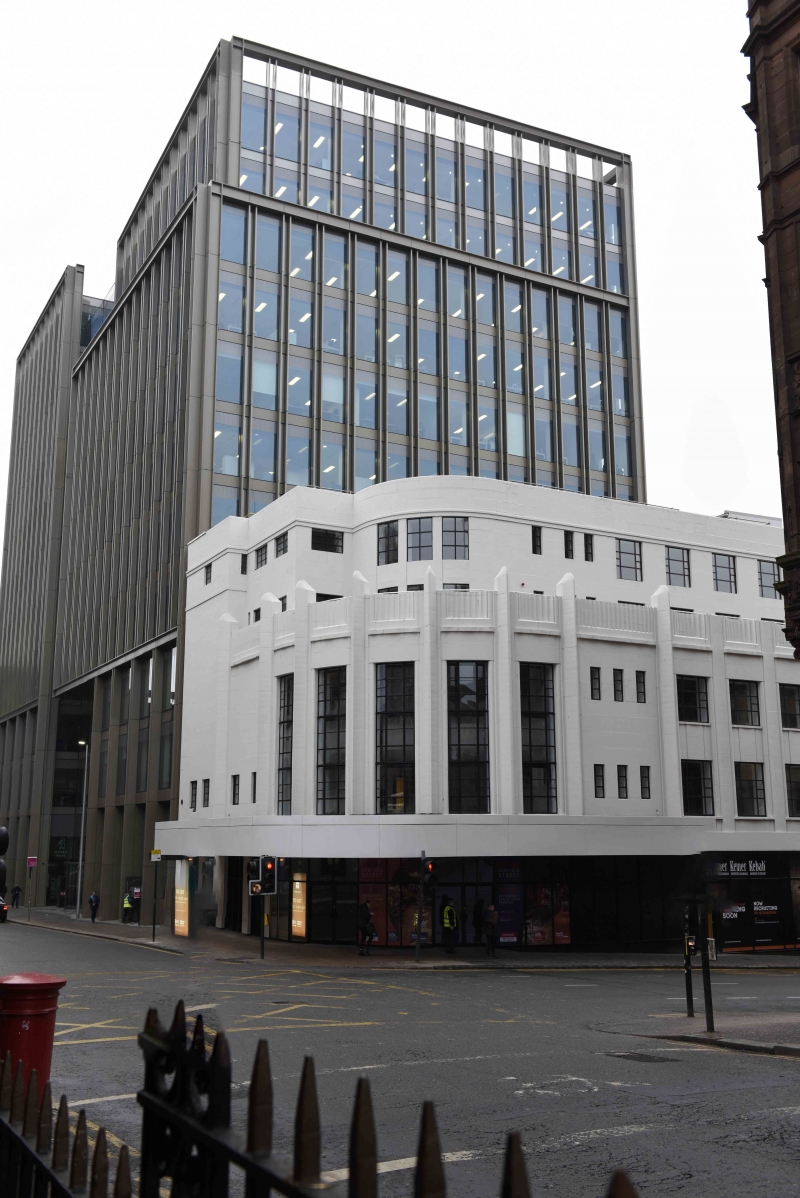 Built to seat 2,800, Glasgow's Renfield Odeon (formerly the Paramount Cinema) was one of a new breed of super cinemas constructed in Britain in the 1930s. The American company Paramount employed prominent London architects Frank Verity and Samuel Beverley to construct these large luxurious cinemas in the major provincial cities. As well as building cinemas for other companies in London and elsewhere, the architects were responsible for Paramount cinemas in Manchester (1930), Newcastle (1931), Leeds (1932), Liverpool (1934), Glasgow (1934) and Birmingham (1937). This is the only cinema by Verity and Beverley to have been built in Scotland.

Cinema-going in Glasgow was hugely significant during the inter-war years. Cinemas were 'the building type most peculiarly identified with the Thirties, and Scotland had a particular affinity to them. Glasgow, with perhaps 120 cinemas in 1937, had more per head of population than any other city in the world' (McKean p63). The entrance corner of this particular cinema was noted for its dramatic 'night architecture' with neon strips illuminating the fins and outlining the brick block to the side. This device helped to unify the two distinct halves of the building (the lighting scheme was partially reinstated when the Odeon restored the cinema's exterior recently).

After the Second World War, Oscar Deutsch, the creator of the Odeon empire, acquired the Glasgow Paramount. In the 1960s the auditorium famously presented the Beatles and the Rolling Stones to Glasgow audiences. In 1969 the auditorium was subdivided into three smaller cinemas and this conversion unfortunately obliterated the original Art Deco interior that included the tea-room above the entrance, the lavish foyers, lounges and the auditorium. However, the original plans survive (see References above) together with a complete inventory and description of the fixture and fittings from 1941 (see References above).

Still in use as a cinema today (April 2003), this building and others like it in Britain are under threat from multi-screen complexes located both out of town and, in a more recent trend, in close proximity. Original Art Deco architecture itself is a rarity in Glasgow and the Renfield Odeon and the former Cosmo Cinema (now Glasgow Film Theatre - separately listed) are the only two surviving operational cinemas left from this golden age in Glasgow.