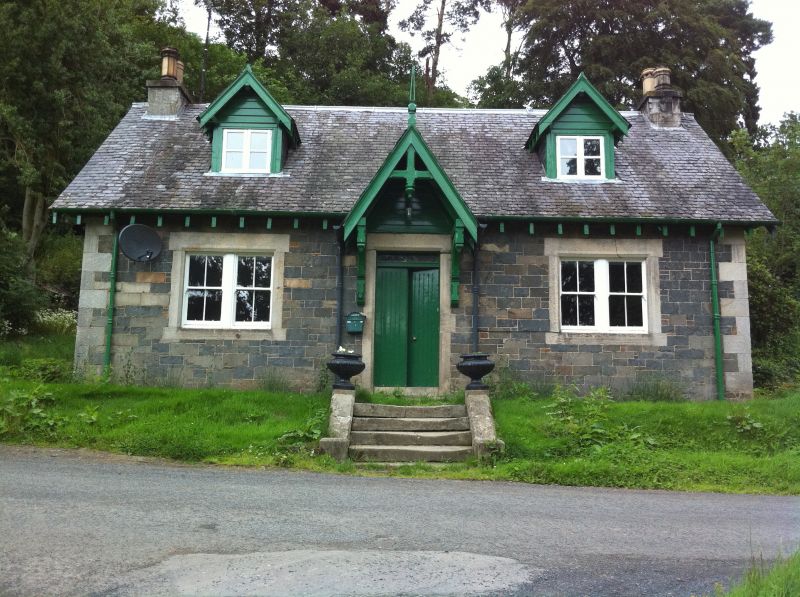 Part of an A-Group with all other Glen estate buildings. Sited near the centre of the estate and built into a sloped site. The Glen estate can be traced as far back as 1296 when Sarra of the Glen swore allegiance to King Edward I of England. The estate remained in the family's hand until around 1512, when the grounds became fragmented and parts were sold to neighbouring landowners and families. By the 1700's, there were 2 main parts of the estate, Easter and Wester Glen. Easter Glen was sold to Alexander Allan (an Edinburgh banker) in 1796 for #10,500. At this point, the house was a fairly small plain farmhouse. His son, William Allan (Lord Provost of Edinburgh) was responsible for enlarging and extending the house, the architect being his friend William Playfair (see The Temple, listed separately); even after improvement it was still not regarded as being fit for a landowner's principal residence. The 3,500-acre estate was bought in 1852/3 by Sir Charles Tennant, owner of the chemical works of St. Rollox, Glasgow, for #33,140. The house was by then outdated and not suited to modern family life; he commissioned David Bryce to design a baronial style house, to which a tower (also by Bryce) was added in 1874. Tennant continually improved the estate landscape (1860-1890) and was responsible for the building of a school, farm, worker's and estate cottages, walled kitchen garden and kennels making The Glen virtually self-sufficient. In 1897, there were approximately 105 estate workers doing a range of jobs; including maids, cooks and servants within the house and gardeners, foresters, shepherds, carters, cattlemen and gamekeepers on the estate. The estate had its own masons and joiners, as well as its own whinstone quarries (remains of one are sited directly behind this cottage). It is likely a plan would have been drawn up (either from a pattern book or by an unknown architect) for an estate workers cottage and this would have been replicated (and adapted) where needed on the estate by the estate team. Many of these cottages retain their original elevations and features. This worker's cottage may have been home to the estate blacksmith and his family, as it is one of the larger styles of estate cottages; it would also lead credence to the modern name Anvil Cottage. It is sited at the core of the estate in the part that resembled a village. The estate functioned like a community until the 1920s. The Tennants lost money during the Wall Street Crash and this had a knock on effect, as estate workers lost their job and tied housing. The numbers on the estate swelled again during World War II, when 48 landgirls came (4 married Glen men and never left). Listed as a good example of a picturesque vernacular cottage within an intact later 19th century estate (other estate buildings are listed separately).