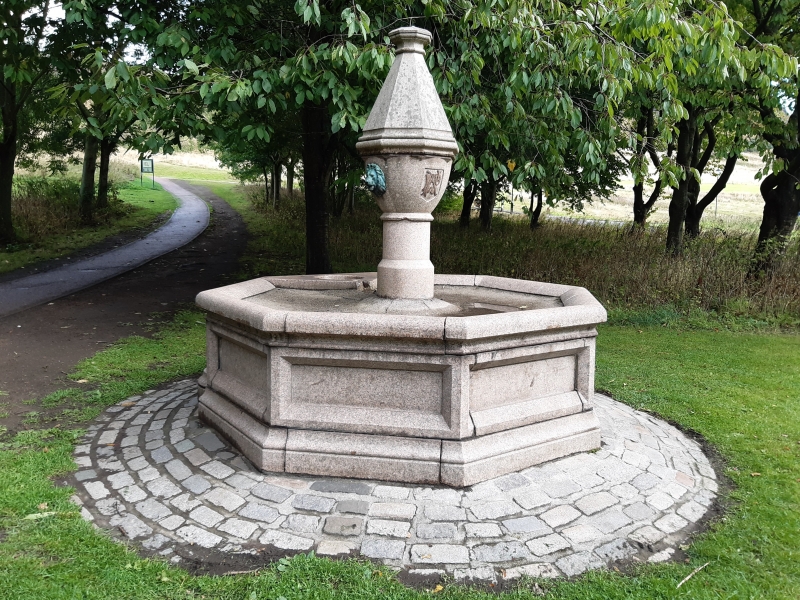 This is an unusual fountain in a distinctive shape situated at the St Leonard's entrance to Holyrood Park and it adds much interest to the landscape. The pink granite sits in contrast to the more usual sandstone used in the surrounding structures in the park. The fountain originally had a bronze unicorn finial.

Robert Morham (1839-1912) was an Edinburgh architect who became City Superintendent of Works in 1873. He was responsible for many public buildings throughout the city , including the Infirmary Street Baths (see separate listing). The bronze lion masks were designed by D W Stevenson.

The grounds known as Holyrood Park have been associated with the Scottish royal household since the 12th century, and were extended to roughly their present boundaries in 1541-2 by James V. The rights of the Earl of Haddington as hereditary keeper of the Park were bought out in 1843, after Queen Victoria's first visit to the Palace in 1842, bringing it again under Royal control. In 1855-8, at the instigation of Prince Albert, plans were drawn up for the landscaping of the Park. Bogs were drained, Dunsapie and St Margaret's Lochs were formed, the Queen's Drive (originally Victoria Road) was constructed, and lodges built by Robert Matheson, who also executed work at Holyrood Palace during the same period. Albert also intended to build a rustic thatched restaurant at Dunsapie Loch, but this plan was abandoned in the face of stout public opposition, including letters to the Scotsman. This fountain dates from a slightly later period of Park landscaping. With the exception of the occupied buildings, including the lodges, the Park is scheduled under the Ancient Monuments and Archaeological Areas Act 1979.

List description revised as part of the Edinburgh Holyrood Ward resurvey 2007-08. Category changed from B to C(S), 2008.