A Category A Listed Building in Greenock, Inverclyde 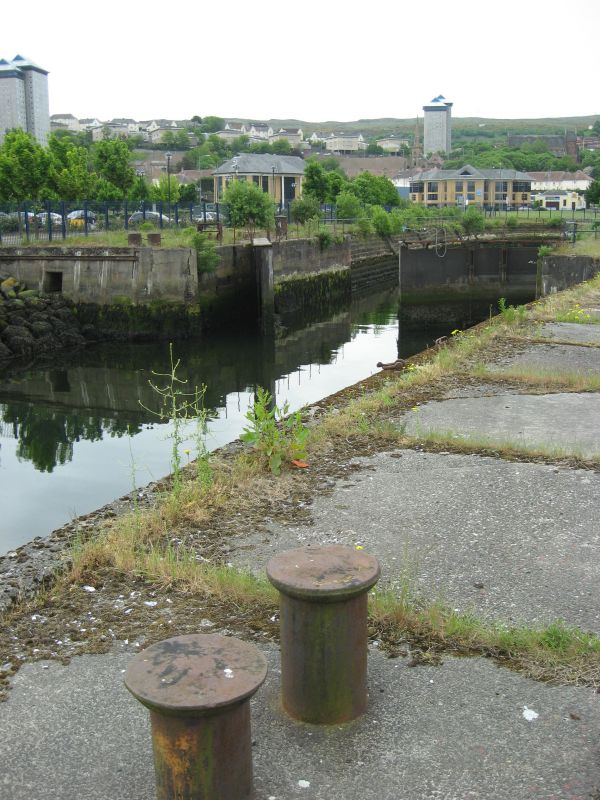 Also known as the Submarine Dock. Situated in Cartsdyke, off Rue End Street, between Victorian Harbour and the T-Mobile office. It is believed to be the oldest surviving dry (or graving) dock in Scotland. There are 8 dry docks currently (2005) listed in Scotland, the oldest of which is the one in Troon, which was built in 1840s; all the others were built in the 2nd half of the 19th century. Built for Steele's shipyard, which occupied this site until it closed in 1883, at which point it was taken over by Scott's. James Steele was born in Ayr, and started his career building fishing vessels and coasters in Saltcoats. He later joined partnership with John Carswell, and the firm Steele and Carswell moved to Greenock in 1796. It is therefore possible (although unlikely) that the dry dock dates from this time. In 1816 the Steele and Carswell partnership was dissolved and Steele joined partnership with his sons, Robert and James. In the 1820s the firm began building steam ships, and it is likely that dry dock was built at about this time. The dry dock and outer basin are shown on John Wood's Town Plan of 1825; the 1838 town plan is more specific, marking the graving dock in 'Mr Steele's Ship Building Yard'. It is interesting to note that the Dry Dock in East India Harbour, which was completed in 1823, is marked as 'New Graving Dock' on the 1838 map, which perhaps suggests that Steele's dock was older.

The dock was extended between the publication of the 1st and 2nd edition OS maps, probably when the yard was purchased by Scott's.