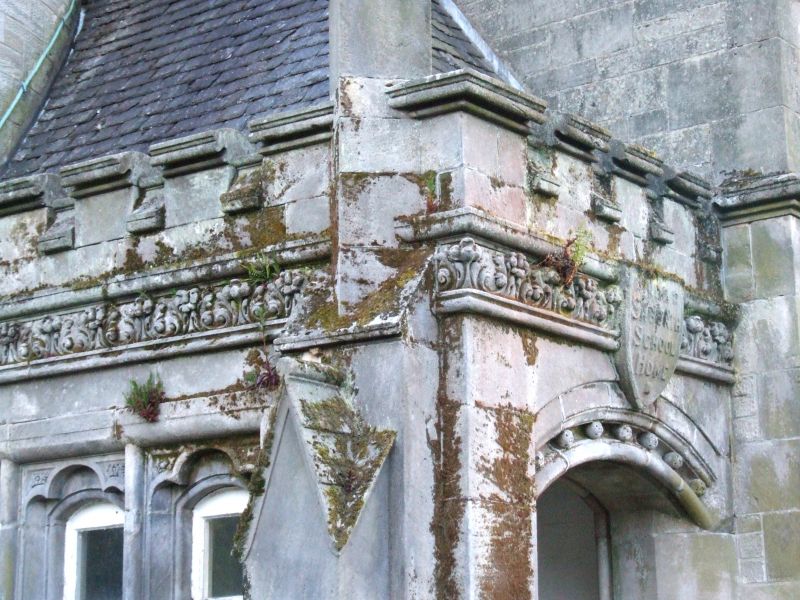 The Sabbath Home was originally used as drop off point for newly interned children as well as providing accommodation for weekly Sunday School gatherings. Architect, Robert A Bryden was the director of the Sabbath School Union at the time, and this may account for the extra level of detail and finish compared to many of the other homes. The quality of the design and detailing is considered to compensate for the predominant use of uPVC windows (2006).

This purpose built settlement was founded by philanthropist William Quarrier in 1877 to accommodate orphaned and destitute children. He had operated orphanages in Glasgow since the early 1870s and was opposed to the institutional nature of the city poorhouses. 50 or so 'cottage homes' were built between 1877 and 1910 on the 10 acre site of Nittingshill Farm, bought at auction for £3560. Each employed a housemother who would look after groups of children in more familial and healthier environment than that of Glasgow's East End. The village also had its own school, church, post office, dairy, poultry farm, fire station, and workshops where the children were trained to a trade. Robert Alexander Bryden was responsible for designing all the buildings on the site in association with Andrew Robertson, with each villa built to an individual specification. The Free Revivalist style, making use of Baronial, Gothic and Tudor influences, is thought to have been inspired by the work of W E Nesfield and Richard Norman Shaw who pioneered the Garden Village movement in England. The village as a whole is significant historically in terms of education and development of children in care, and remains generally well preserved with only a few of the buildings having been altered or extended. The historic core of the village has held Conservation Area status since 1985.