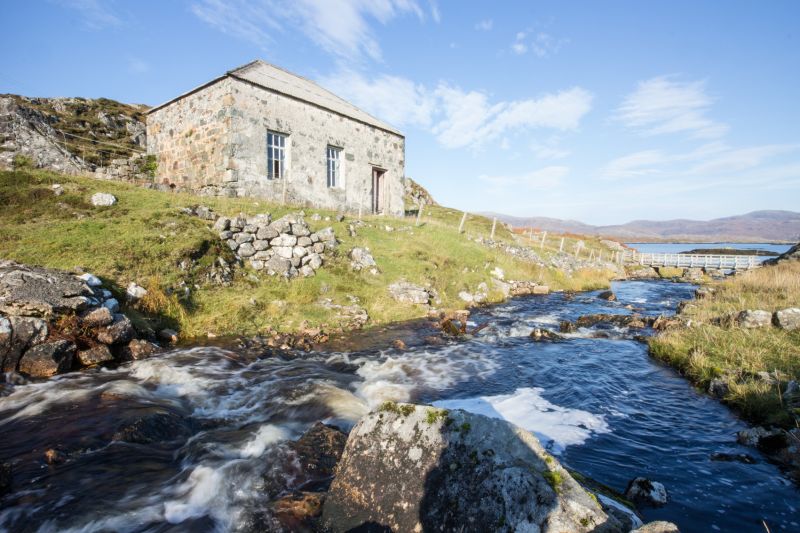 Ecclesiastical building no longer in use as such. Meavag, or Mhiabhaig, is situated at the northern end of the Golden Road, so-called owing to the enormous construction cost. Meavag Mill, is a rare building type in the very rocky landscape of the Bays Of Harris where, until the advent of the Golden Road in 1897, the only form of transport was by sea.

Built by the Harris Estate, Meavag appears on the 1876 Ordnance Survey map as a corn mill. However, as Hume points out 'Until recently oat and bere meal were much more widely used in the Highlands and Islands than wheat flour. Hence the majority of the grain mills in the area, identified on the early Ordnance Survey maps as 'corn mills', were meal mills. Oats and potatoes were the staple crops grown in small quantities in 'lazy beds' on individual crofts. Matthew and John MacAulay were the millers, and the 1861 census records Matthew as lodging in Meavaig Village with his brother still living at the former Breasclete Mill in Lewis. There are no other listed mills in Harris (2006), even on the relatively gentle west coast from where many clearance crofters came to settle rather than accept the alternative of emigration to Canada. Shaw Grant records the terrible struggle for survival by displaced families of the clearances, and says that the fertile land was eventually given to 'alien tacksmen and their sheep, while erstwhile clansmen, ', were driven into poverty and destitution in the Bays'. He further records that in 1854 (less than a decade before this mill was built) more than 600 men, women and children sailed for Canada from Harris.

Quite when the mill was converted to a Free Presbyterian meeting house is uncertain, but it is thought locally not to have been used as such for any length of time, and almost certainly not since 1980.