The Laurieston Bar, 58 Bridge Street And 2 And 4 Nelson Street 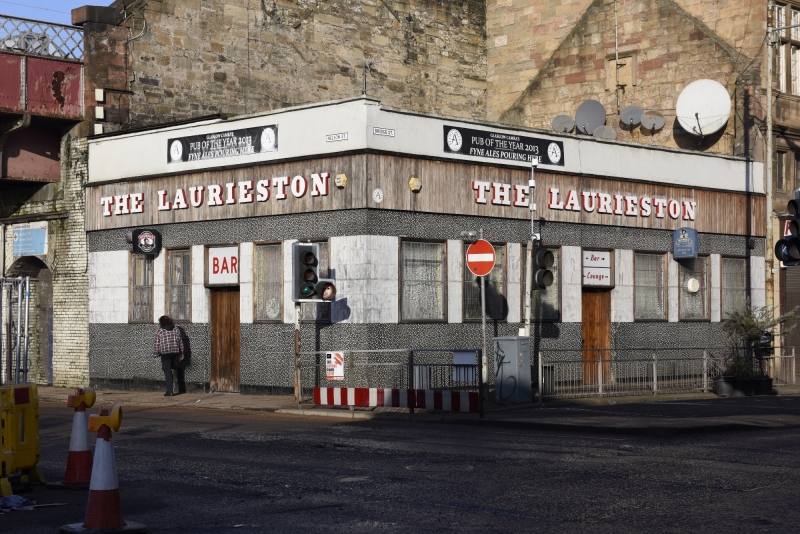 The Laurieston is a rare survival of a public house with a comprehensive near-intact (external and internal) 1960s decorative scheme. Within the public house building type it is a particularly unusual example. It forms a distinctive part of the streetscape and has a fine period interior.

The 2nd edition Ordnance Survey map of 1892-7 shows a public house on this site and at some point the building was reduced from 2 storeys to a single storey, possibly around the time of the 1960s remodelling. A historic photograph inside the lounge bar shows the former public house with a traditional timber and etched glass exterior. It was extensively remodelled in the 1960s and, although some early fabric probably remains, it is not obvious. The off-sales section reached through the Bridge Street entrance is a particularly late example of this feature. The core of the original island bar counter is thought to remain beneath the remodelling. The 1960s scheme is comprehensive and very much of its time. From the distinctive black and white tiling on the exterior to the lettering used on the doors and entrances as well as the extensive use of Formica, the Laurieston is an excellent example of 1960s public house design of which very few examples are thought to remain today.

It is likely that the remodelling was inspired by the comprehensive development which was concurrently taking place in the Gorbals area as the old tenements were swept away and replaced with modern housing schemes.

Listed as part of the Public Houses Thematic Study 2007-08.