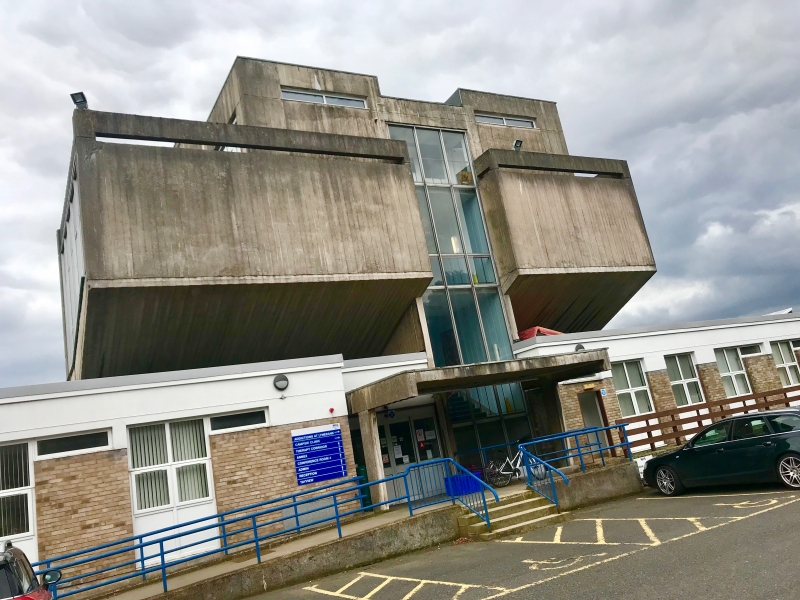 The Lynebank Hospital administration block, built in 1965, is an important example of Brutalist architecture of the post-war period. It is a rare and substantially unaltered example of this style of architecture at a hospital site in Britain. The block is situated on high ground and acts as a focal point, visible from Halbeath Road and from the southbound M90 into Dunfermline.

Two asymmetrical, cantilevered lecture theatres demonstrate a sophisticated and consistent use of geometry in the building s design and are a key part of its character, showing the influence of earlier 20th century Soviet Constructivist architecture, but also taking cues from earlier British examples of proto-Brutalist.

The administration block is built from rough-cast concrete, poured into moulds constructed on site. This method of construction, a defining characteristic of this style of Modernist architecture, pre-dates the widespread use of pre-cast concrete panel construction in major public and commercial buildings during the 1970s. The geometric surfaces of the administration block reflect internal spaces with lecture theatres, stairwells and individual offices clearly articulated in the external form.

Internally, the walls of the main stair are distinguished by timber board-marked concrete shuttering with a distinctive relief pattern. The use of concrete for its aesthetic interest is associated with Brutalist architecture of the period and the stair at Lynebank administration block is a good demonstration of this. The pierced parapets and narrow window openings towards the rear of the administration block can be seen as a modern take on the Scottish fortified tower-house.

Brutalism (from the French, béton brut, or raw concrete) is broadly characterised by the expressive use of core building materials, particularly concrete, in an unadorned and uncompromised manner. It is now recognised as a defining trend of the post-war building era with many of Britain¿s greatest architects of the period designing some significant housing, university, school and hospital projects of the period, that have since come to be associated with the style including Alison and Peter Smithson (their proto-Brutalist Hunstanton School in Norfolk, 1949), Denys Lasdun (University of East Anglia, 1970 and National Theatre, London, 1976) and James Stirling (Andrew Melville Hall, St Andrew s University, 1967 - see separate listing). In Scotland, Alison and Hutchinson were early adopters of the emerging Brutalist aesthetic during the 1960s, their work principally consisting of hospitals, schools and social housing. Buildings by the practice include the Cables Wynd housing development, Leith 1963; Woodcroft Telephone Exchange, Edinburgh (1953 - previously listed at category C, now demolished), and a major extension in 1960 to Edinburgh s Western General Hospital, which also saw the iconic Nuffield Transplant Unit (1963) by Peter Womersley, an early example of a more sculptural, international approach to hospital design. Robert Forbes Hutchison was chief architect to the Regional Hospital Boards of Scotland before commencing independent practice in 1950. The partner in charge of the Lynebank scheme, Harry Horace MacDonald (b.1916, ARIBA, FRIBA) was senior architect with Burnet, Tait and Partners in 1952, having worked with the renowned industrial architect James Shearer on a number of hydro-electric schemes in the 1940s. He became a full partner with Alison and Hutchison in 1961.

The formation of the National Health Service in 1948 led to a massive expansion in hospital building in the 30 years that followed. Modernism in architecture sought to directly equate with improvements in health-care. New rationalist philosophies in hospital design focused on science, function and open-ended planning, eschewing historicist architectural adornments. The multi-storey approach to hospital planning, with smaller wards and centralised services, was pioneered by Gillespie Kidd and Coia at Bellshill Maternity Hospital in 1959-62 (demolished). The majority of designs during the early period of NHS expansion broadly followed this template. Overtly individualistic buildings, such as Womersley s Transplant Unit and the Lynebank Hospital administration block, were unusual exceptions to the general trend.

Lynebank Mental Hospital was officially opened by Princess Alexandra on the 9th of May 1969. The wider complex of ward ranges, hall and canteen adjoining to the rear of the administration block, and further workshops, staff accommodation and other buildings at Lynebank Hospital are laid out on a standardised dispersed plan and were not found to meet the criteria for listing at the time of the assessment of the administration block in 2014.

Minor updates to Statement of Special Interest Section in 2018.