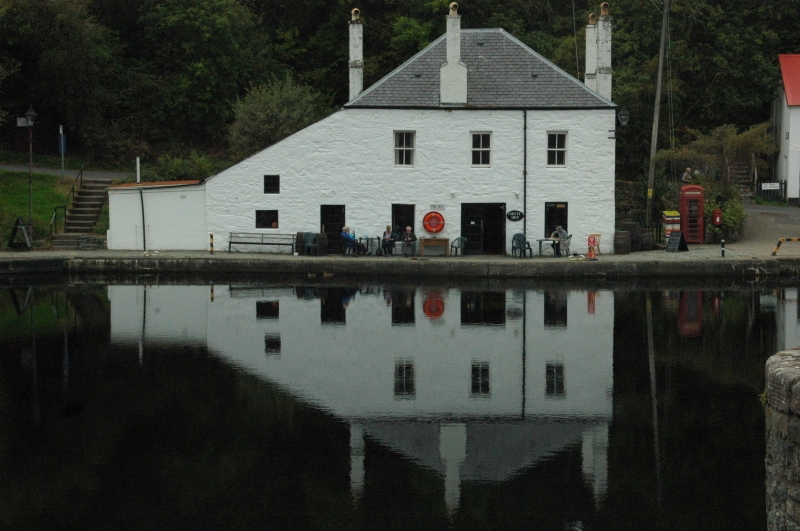 2-leaf door to centre (east elevation) facing canal and a further door at the large 2-storey lean-to addition to left. Further flat-roofed addition to far left. There is self-contained post-master/loch keeper's accommodation to the upper floor (Harbour House) accessed on the higher ground to the rear.

Built during the early development of the Crinan Canal between 1794 and 1820, the former harbour house and post office is located to the west side of the scenic canal basin at Crinan. It is a significant part of the early infrastructure of the Crinan Canal - a landmark sea-to-sea canal on the west coast of Scotland and one of only five surviving canals in country.

The building is shown occupying its current footprint on the first edition Ordnance Survey map of 1865. The tall and narrow chimney stacks and steeply pitched piended roof are unusual and give it a presence in the landscape. It is built into the bank of the canal basin with a separate dwelling accessed by its own door at the rear to the upper floor. Separate entrances to ground and upper floor levels are seen elsewhere on the Crinan Canal at Oakfield Bridge House near Lochgilphead and at the Canal Office at Ardrishaig (see separate listings).

Siting the former post office beside the canal basin allowed for easy loading of mail and heavier items onto the canal boats. Beginning in the early 19th century, the postal service that operated through the canal allowed mail to reach its destination faster and with less effort than was previously required.

The Crinan Canal was one of more than 50 canals projects approved in Britain between the years 1790 and 1794. This intense period of canal building dramatically increased the opportunities for trade arising from the new industries of the period and decisively ended the situation in which heavy materials could only be moved short distances without the aid of navigable rivers or coastal transport.

Taking its name from the village at its north-westerly end, the canal is 14 kilometers long, rising and falling through 15 locks. It was built to stimulate trade between the Clyde area and the Inner Hebrides by avoiding the 130 kilometer journey around the Kintyre peninsula. The canal transported numerous freights, particularly slate from the north, coal from the south and services including postal and passenger traffic.

The Crinan Canal is renowned for its striking landscape and scenic variation over its relatively short length. The canal-side buildings are largely 19th century with simple detached cottages defining the small settlements along the route. The canal had a long and troubled development history with shortages of labour, building materials, structural issues and related financial concerns. The perseverance needed to complete and continue to maintain the canal despite these set-backs, amid the evolving industrial and commercial landscape of the 19th century, are part of the canal's significance.

Engineer James Watt had surveyed possible routes for the canal as early as 1771. James Rennie proposed an alternative route in 1793 and work began the following year, with the canal opening to traffic in 1801. Under the advice of pre-eminent Scottish engineer Thomas Telford, a major refurbishment of the canal was undertaken in 1817, funded by the Government. Telford's recommendations resulted in a complete overhaul at a cost of over 18000 pounds. Substandard stonework, lock gates and bridges were repaired or replaced, banks were raised, bends straightened and rocks removed to level the canal bed. The canal effectively came into public ownership after these works were complete.

Traffic through the Crinan increased considerably after the opening of Telford's Caledonian Canal in 1822. Using both canals, boats could now travel from Glasgow to Inverness. Queen Victoria navigated the Crinan Canal in 1847 and passenger steamer companies were quick to advertise a 'Royal Route'. By 1866 a specially designed Canal steamer called The Linnet was introduced to help cope with the increasing passenger numbers. The Linnet remained in service for the next 65 years. Between 1930 and 1932, new sea locks were built at either end of the Crinan Canal, making it accessible at any tide. The Canal has continued to operate as a centre for tourism in the area into the 21st century with around 2000 yachts, fishing boats and pleasure cruisers travelling through its locks each year.