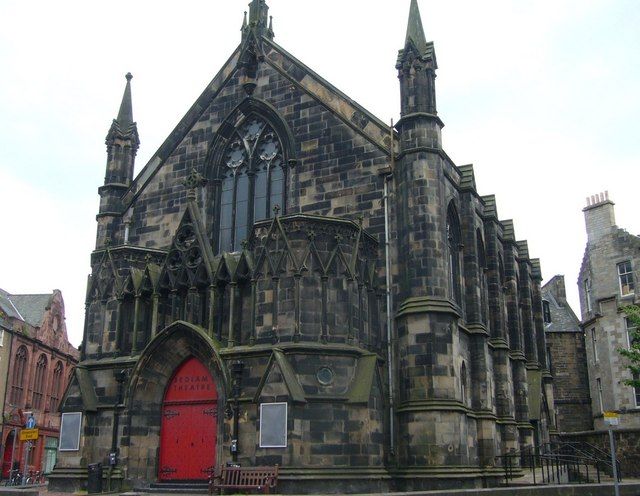 A finely detailed, Gothic style, mid-19th century former church by a prominent Scottish architect in a pivotal position at the head of George IV Bridge which makes a strong contribution to the streetscape of the Old Town of Edinburgh.

This area was just outside the Flodden Wall, and inside the Telfer Wall (1628-36). It was occupied by the Charity Workhouse (to the W of Forrest Road), the Poorhouse for Children and the Bedlam, or lunatic asylum (marked on Kirkwood's 1817 map). The Bedlam was partially housed in the former Darien House (built in 1698 and illustrated in Wilson's Memorials), which had been the offices of the ill-fated Darien Company. The poet Robert Fergusson died in the Bedlam in 1774 at the age of 24, and his physician, Andrew Duncan, campaigned successfully to have the institution closed down.

The planned street triangle of Forrest Road, Bristo Place and Teviot Row was conceived as part of Thomas Hamilton's (1784-1858) vision for the new Southern Approach Road linking Princes Street to George Square and the Meadows (via the Mound, Bank Street and a the new George IV Bridge). This former church is critical in closing the vista south from the Bank of Scotland. Hamilton also designed a church - 'John Knox's Church' (not built) - on Castle Hill, terminating the vista from Princes Street up the Mound.

Thomas Hamilton (1784-1858) was one of the principal Edinburgh architects of the earlier 19th century, an original founder of the Royal Scottish Academy 1826, who made a strong contribution to public and church architecture in Edinburgh. The 1903 Dean of Guild drawings show plans by JA Scott and A Lorne Campbell for the vestry and waiting room to SE, and for the organ chamber to S. Scott and Campbell formed a partnership in 1898 their first executed project being St Stephens UF Church in Stockbridge. The majority of their work together was on ecclesiastical buildings.