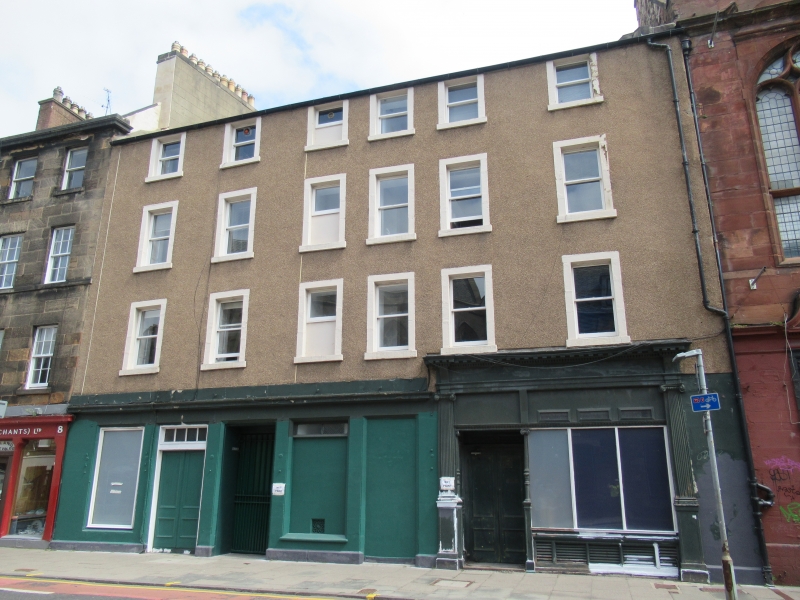 An 18th century tenement making a good contribution to the streetscape with a finely detailed shopfront to the lower right side. The planned street triangle of Forrest Road, Bristo Place and Teviot Row was conceived as part of Thomas Hamilton's (1784-1858) vision for the new Southern Approach Road linking Princes Street to George Square and the Meadows (via the Mound, Bank Street and a the new George IV Bridge). The City Improvement Act brought in by Lord Provost Chambers in 1867 was to implement better housing standards and to replace the medieval slum areas in Edinburgh's Old Town. The groups of Baronial style tenement blocks on Forest Road and Teviot Place were built as a direct result of this development phase.

Bristo Place, originally named Bristo Street, was the principal route south out of the city of Edinburgh from Bristo Port. Bristo Port, a fortified gateway associated with the Flodden Wall, was built in 1515 (and was presumably demolished in 1715 in common with other ports). These tenements may have been associated with St George's Inn (Kincaid's 1784 plan of Edinburgh), a coaching inn situated just outside the Bristo Port.

(List description updated at re-survey 2011-12 following category change from B to C(S).)