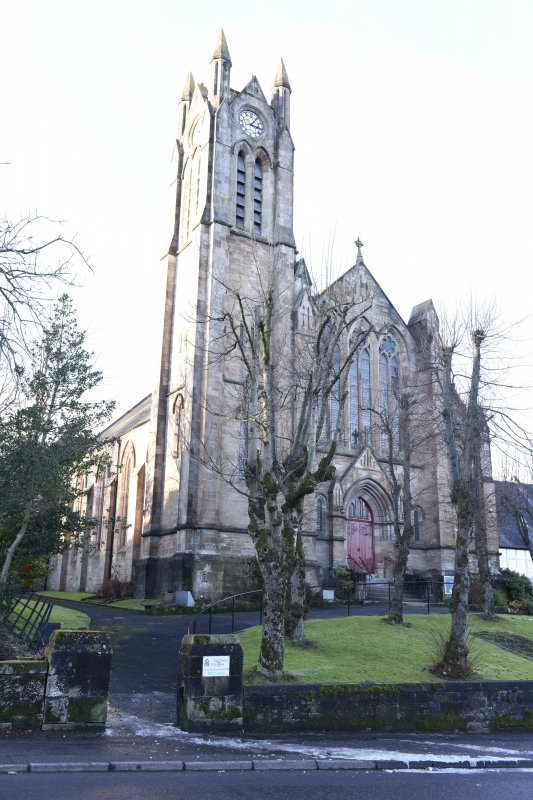 Dated 1884, Greenbank Parish Church was built in the Early English Gothic style to the designs of the architect William Gardner Rowan, of McKissack and Rowan. It was extended in the 1930s by the architect, Joseph Wilson, with the addition of the present chancel and vestry.

The church is largely rectangular-plan with a two-stage square-plan clock tower to the southeast corner, which features a gabled belfry and octagonal corner pinnacles. Constructed of randomly coursed stugged yellow sandstone with ashlar dressings, there are offset buttresses with gablet heads and projecting eaves courses throughout.

The east (entrance) elevation has a projecting base course and moulded cill courses. The pointed arched doorway to the right-of-centre is framed by a projecting gabled surround which has chamfered reveals, a deep moulded architrave over and flanking piers with gablets. The piers are inscribed; 'ERECTED 1884' and 'ENDOWED 1889'. The entrance door is a double-leaf boarded timber door with decorative strap hinges and a tripartite lancet window to the timber overdoor. The entrance is flanked by small pairs of windows and the principal three-light stained-glass window above has cinquefoil details to the window heads.

The six-bay side elevations to the north and south are symmetrically arranged. A projecting two-storey gable-fronted porch is located to the left-bay of the north elevation, with a secondary door opening to the centre, which is framed by a chamfered reveal, a moulded architrave and a hoodmould.

The west elevation has a projecting canted chancel with a hipped roof and three decorative stained-glass windows. A two-storey vestry projects to south re-entrant angle, which has a hipped roof and pairs of two-over-two timber sliding sash windows set in plain ashlar surrounds with chamfered cills. A gable-fronted single-storey transept projects to the northern re-entrant angle, with a three-light window.

The interior was seen in 2017. It has a double-height space, galleried on three sides with pointed-arches to the chancel and aisles. The majority of the late-19th century decorative scheme survives, although that to the chancel dates from the 1930s and later. The roof comprises round-arched timber trusses springing from moulded masonry corbels, and the timber boards to the waggon ceiling are decorated with painted stars. The pointed-arched nave is carried on giant cast iron columns, which extend down through the galleries, and are capped with foliate capitals. The walls largely have timber panelling to dado height and painted render above, except for those to the chancel which have exposed stonework throughout. There are tongue and grove timber pews, a panelled gallery balustrade and timber flooring.

The decorative carved woodwork to the chancel, which includes the pulpit, altar table, lectern and elders' pews, is the work of the Macneill Brothers of Beith and John Crawford of Glasgow. The three stained glass windows lighting the chancel are by James Ballantine of Edinburgh. The Early English Gothic style pulpit is located to the side. Organ pipes by Blackett and Howden (dating to 1903) are located on the southern wall of the chancel, encased in carved woodwork surrounds that date from the 1930s. The northern transept has a mural depicting the story of Ruth, which was completed in 1977. The vestibule to the main entrance has a pair of dog-leg stone stairs with decorative cast iron balusters and coiled carved timber handrails. Late-19th century timber-panelled doors are retained throughout.

In accordance with Section 1 (4A) of the Planning (Listed Buildings and Conservation Areas) (Scotland) Act 1997 the following are excluded from the listing: manse, Cowley Hall, Fraser Hall, link building and the Church Officer's house, boundary wall and gatepiers.

Greenbank Parish Church is a good example of a Gothic Revival style church built for a small parish. Although relatively modest in terms of scale, the church has some good decorative detailing throughout with a particularly good Gothic Revival interior. It is largely unaltered, apart from the 1930s additions to the chancel. The church, with its high tower, is prominent in the streetscape.

Built in 1884, Greenbank Parish Church is first shown on the 2nd edition Ordnance Survey map of 1896. It was constructed for the established church as 'Greenbank Chapel of Ease' (a church building within the bounds of an existing parish, serving those who cannot conveniently reach the parish church) on land gifted by local landowner, Mr J. D. Hamilton. The church took its name from Hamilton's Greenbank estate, located just over a kilometre to the west.

Opened on 13 April 1884, the total cost of Greenbank Parish Church, including the furnishings, was £4,055, a figure which exceeded the early budget of £3,100. In February 1889 Greenbank became a parish church, with a new parish having been created out of part of the Mearns, Eastwood and Cathcart parishes.

The 2nd and 3rd edition Ordnance Survey maps (1896 and 1911) show that the original church building did not include the present chancel to the west. In its place was a hall abutting to the rear of the church, in which the Sunday school was originally held. The clock to the tower was donated around 1920, in thanks for a son returned from the First World War but also in commemoration for those who did not come back. There is also a wall-mounted memorial in the vestibule, commemorating those from Greenbank who died in the First and Second World Wars.

By the early 20th century, the existing church accommodation was insufficient for the growing congregation. In 1926 the Cowley Hall was constructed to the north of the church building and in 1934 plans were drawn up for additions to the church building, comprising a new chancel, choir room and session house (the present chancel and vestry abutting to the west and south elevations of the church, respectively). The extensions, which opened in 1937 were designed by Joseph Wilson, with advice from the artist, Sir David Young Cameron (1865-1945). The transept to the north elevation of the church was also re-slated as part of these works.

Following the Disruption of 1843, the established church commenced a programme of church building to rival the Free Church, increasing its number of parishes between 1843 and 1909 by over half. There are a large number of churches dating from this period, of which Greenbank is not an early or rare example of its building type. The Gothic Revival style was popular in church design from the early half of the 19th century but matured to fruition during the latter part of the century and endured into the early 20th century.

As surviving churches of the 19th century are not rare – particularly those built after the middle of the century – authenticity, or closeness to its original fabric is an important consideration for listing, as what may have been added or taken away may be of benefit or of detriment to the building's character. Greenbank Parish Church is a good surviving Gothic Revival style church of the period which is relatively little altered. It is of a coherent design, displaying some typical but well detailed decorative elements both to the interior and exterior and largely retains its late 19th century character.

The interior of the church is late 19th century Gothic Revival style. Although typical for its period, it contains good quality decorative detailing and is little-altered. The interior therefore contributes to the interest of the building in terms of listing.

The external plan is largely rectangular, with a tower to one corner and 1930s additions that include the chancel. This is a typical arrangement for a church of this period, and there is therefore no innovation in the plan form.

Internally, the plan form of a central nave with timber pews, side aisles and a three-sided gallery is typical for a church of this date. With the exception of the 1930s additions, the internal plan has been little altered.

Greenbank Parish Church was first built as a chapel of ease in 1884. The design is in the Early English style, a Gothic Revival style that was popular in Scotland following a new interest in medieval architecture, especially in church building, which swept the architectural profession around 1840.

For church architecture in Scotland, the years 1840 to around 1880 are dominated by a specific interest in the plainer early Gothic styles (characterised by pointed arched plate tracery windows) as this style was found to be less decorative – essentially not Episcopalian or Catholic in leaning. As such, the Gothic style at Greenbank Parish Church is typical of churches of this denomination of the period and is not exceptional.

Greenbank Parish Church is modelled on the Early English style which the architect William Rowan favoured in much of his ecclesiastical work during the early 1880s. It has some high quality Gothic Revival detailing to its exterior and interior, including decorative carved woodwork to the pulpit, altar table, lectern and elders' pews. Overall, the scheme is remarkably complete.

Greenbank Parish Church is also a good example of the work of an architectural practice who were prolific in church design during this period, working mainly in Glasgow and the west of Scotland. The appointed architects were the Glasgow-based firm of McKissack and Rowan (1872-1890). William Rowan was responsible for much of the design work and the firm was largely involved in the design of church buildings during the late 19th century. While a few examples of Rowan's work took inspiration from the neo-Greek style of church design, the majority were either Gothic or Romanesque Revival. His earlier designs mainly followed the Early English models, such as Livingstone Memorial Church in South Lanarkshire (nearly identical to Greenbank Parish Church and listed at category B, LB6589) and the former Ladhope Free Church in Galashiels (listed at category C, LB50677). Other, generally later examples of his work incorporated the Romanesque with a revival of late Scots Gothic, such as the crown spire at Craigmailen United Free Church (listed at category B, LB22334) and Strathbungo Parish Church (listed at category B, LB32397).

Although not wholly in its original form, the 1930s additions by Joseph Wilson reflect the growth of the congregation at this time. These additions feature good decorative detailing by skilled craftsmen, such as the carved woodwork and stained glass windows to the chancel.

The church, with its landmark tower, is prominent in the streetscape which is largely residential in character dating to around 1920 to 1940.

There are no known associations with a person or event of national importance at present.

The clock to the tower and the war memorial mounted on the vestibule wall commemorate those members of Greenbank who were killed in the First and Second World Wars.