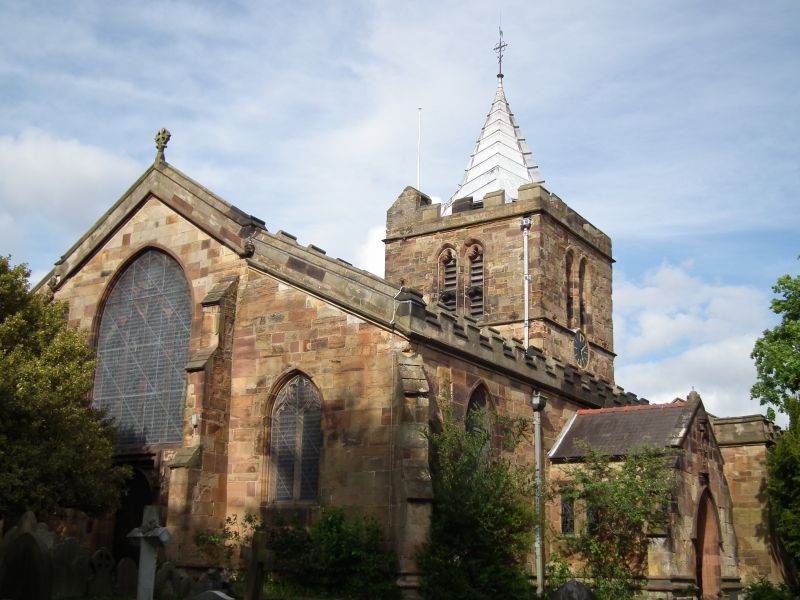 Location: Situated at the end of Church Lane within a walled churchyard.

Mid C14, late Decorated church with earlier origins. This was restored by James Harrison c1855-6 but was largely gutted by fire in 1857. The church was restored in Decorated style by Sir Gilbert Scott of London and was completed in 1859. A south porch was added to the south chancel aisle by Douglas and Fordham of Chester in 1896, in memory of a son of W E Gladstone, the Prime Minister. The Gladstone memorial chapel was added to the N side of the chancel to receive effigies of W E Gladstone and his wife Catherine. By Douglas and Minshull of Chester it was built between 1901-3. A vestry range was added to the N/E in 1909, also by Douglas and Minshull.

Chancel: Chancel S aisle (Whitley Chantry), a 3-bay projecting chapel, probably the pre-fire remodelling by Harrison. Parapet as before. 3-light Perpendicular windows with returned labels. Small, gabelled entrance porch as before (Douglas and Fordham) with sculpted figure of Christ above in canopied niche flanked by relief-carved angels. Large stepped-buttresses between bays 2 and 3. Chancel with steep-pitched graded slate roof with moulded, coped gable to E end. Beneath Decorated E window a similar-style tripartite tabernacle-niche with relief sculpted depiction of the Ascension, flanked by angels on pedestals. Cusped, arched tracery lights. Attached to N of chancel, the Gladstone Memorial Chapel. In Decorated-style with simple triple lancets and Decorated tracery. Parapet, labels and buttresses as before. Adjoining to NE a single-storey vestry with 2 and 3 light cusped, arched-headed windows. All by Douglas and Minshull. W end gabelled as before. Victorian Perpendicular entrance with flat, returned label and blind tracery in spandrels. Door as before.