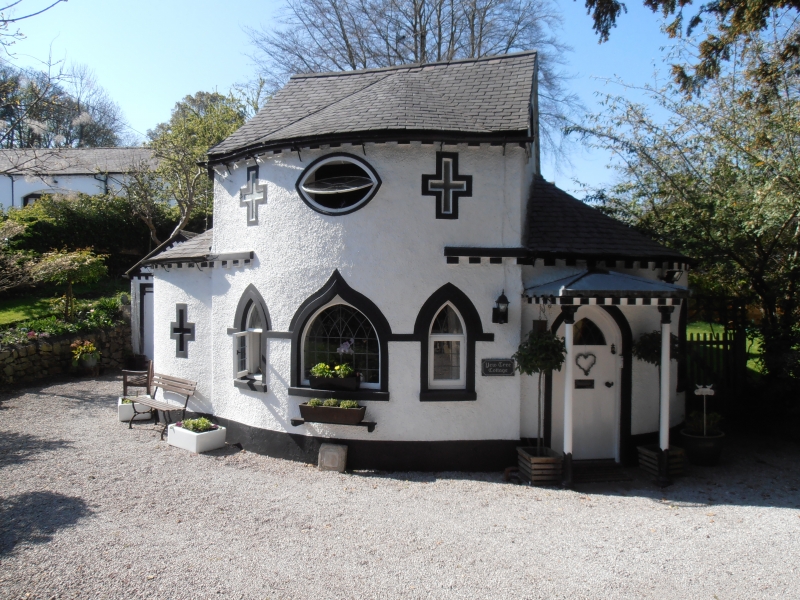 Location: Situated on the W side of Marford Hill close to the Trevor Arms Hotel.

One of a group of cottages and houses built in Cottage Orne style for the Trevalyn Estate while it was under the stewardship of John Boydell. The buildings along Marford Hill were completed by 1820, building phases of 1814 and 1816 are suggested by Trevalyn accounts. Early C19 maps suggest the original plan form of this cottage resembled a quatrefoil, extensions and additions C20 by R Cresswell Lee and TACP.

Render, slate roof with brick chimney, 1-and 2-storey. Bowed 2-storey front flanked by semicircular single storey wings. Central bay has ground floor central window with ogee head flanked by narrower arched windows, above there is a central bullseye window flanked by mock arrow slits, the roof bulges out to accommodate the bow; gabled return elevations with blind bullseyes. wing to left has mock arrow slit and 3 linked arched windows, That to right has entrance with arched head and porch. Dentil cornices throughout which return for a short distance at eaves level in the gable ends and at first floor level in front elevation. Extensions to rear in matching style.