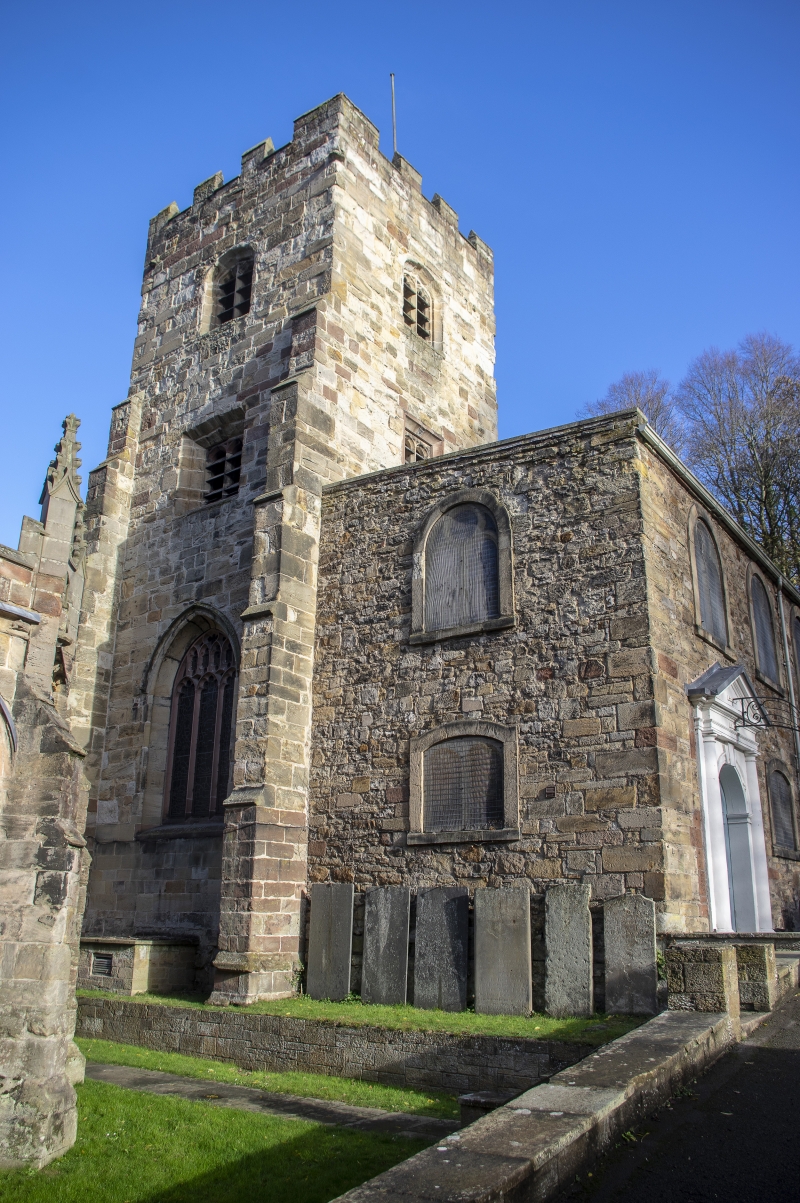 Location: Immediately above and to E of St Winefride's Well Chapel; churchyard to S. Also reached from the lower end of Well Street.

C14 Perpendicular church, largely rebuilt 1769-70 (possibly to the desgins of Thomas Meredith) and then remodelled, principally by addition of chancel, in 1884-5 by Matthew Wyatt (cost £3000). Further alterations in 1905. A church was founded here in C7 by St Beuno and was originally dedicated to his niece St Winefride; the rededication (ca 1770) may have been made to dissociate the Protestant church from the Catholic practices below at St Winefride's Well. Rubble construction, coursed to substantially C14 tower; low pitched roof

3-stage W tower with added crenellated parapet and stepped buttresses to W; C18 enlargements embraced it to N and S, creating broad 3-window W front. 2-light belfry openings, 4-centred to top on W face; Perp style 3-light W window with label, inserted in 1884-5. The C18 work created the main body of the church while the fenestration of the 6-window side elevations relates to Matthew Wyatt's work; Italianate 2-light windows - round-headed to gallery and camber-headed below; the N side includes one full height window. Similar windows also to the apse. S side has pedimented porch to the westernmost bay with Doric columns, round-arched doorway with keystone and fine lamp bracket; panelled double doors. Low vestry range to N side added in 1905 (in poor condition at time of inspection - Spring 1990); depressed ogee arch doorway.

The 'preaching-box' interior is rectangular and galleried; 4-bay nave, with full height aisles, and apsidal chancel. The underpinned late-medieval tower arch has sunk wave moulding detail as do the continuously moulded 3-order arch openings to either side. Masonry corbelled to SW corner for vice stairs with low chamfered arch doorway. Raked galleries carried on low cylindrical stone piers with moulded capitals - these are reused from the late medieval church. Panelled gallery front and C18 tapered columns above; the easternmost bays of the gallery on both sides were removed during the 1884-5 work. Plain ceiling with modillion bracket cornice to nave and simpler moulded cornice to aisles. Semicircular coffered chancel arch with dentil cornice to imposts and pilasters with egg and dart capitals; frescoed spandrels of trumpeting angels; similar detail to apse. Panelled dado behind alter and frieze of copies of Italian Renaissance paintings. Ionic pilasters flank E end windows.
Low chancel screen, pulpit and font all added in 1884-5; War Memorial stained glass in the aspe by Clayton and Bell. Classical inner porch. Monuments include one to vestry inscribed T M 1658 with coat of arms and one by Flaxman (1805) to Paul Panton in Grecian manner; many other C18 and C19 monuments. C13(?) headless effigy of a priest (discovered during the rebuilding in 1769 and now at W end). Former box-pews reused for panelling around walls.