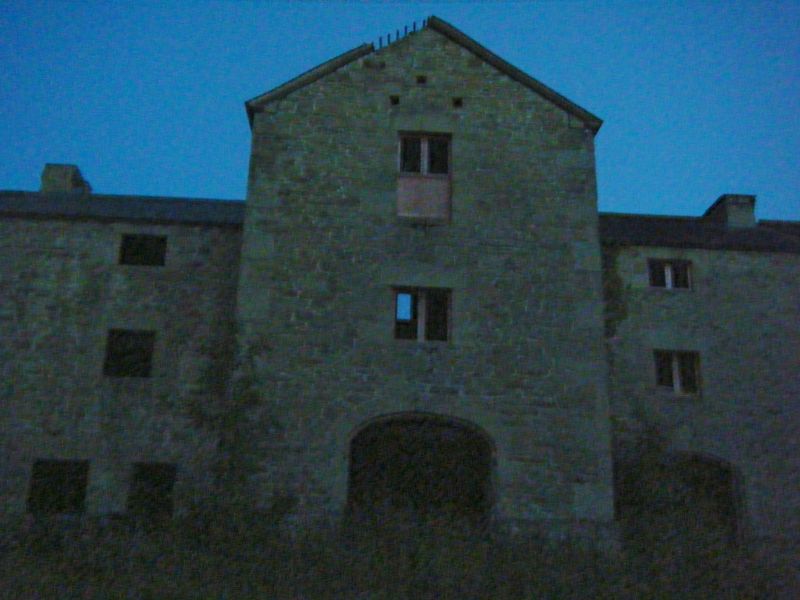 Location: On the N side of a track leading from the end of Abbey Drive in Gronant to Talacre Abbey, and approximately 350m SW of the house.

Talacre Abbey was built 1824-9 by Thomas Jones, architect, for Sir Edward Mostyn, on the site of an earlier house. Jones also designed a number of estate buildings, including the Home Farm, which is shown on the 1839 Tithe map. It comprised a coach house with offices and domestic lodgings in the wings.

A substantial U-shaped 2-storey coach house block. The main elevations are of snecked dressed stone, the rear of rubble stone with tooled dressings and quoins, and a graded slate roof is behind coped gables. The front faces S and has a low cross wall attached to the outer wings enclosing a yard. The wall incorporates a central gateway which has polygonal piers with bell-shaped caps, and the flanking walls have moulded saddleback copings. The coach house occupies the central range and has 6 doorways, forming an arcade, with depressed round heads, all with double boarded doors, of which the central pair are within a projecting gable with a wooden cupola to the ridge. Reduced ridge stacks are to the R and L. In the upper storey are three 2-light mullioned windows with small-pane glazing and hood moulds.

The N (R-hand) wing has 2-light mullioned windows with hood moulds, all renewed in earlier openings. In the lower storey are 5 windows and a boarded door and overlight at the L end. In the upper storey are 3 windows, of which the window to the R retains original small-pane glazing in one of its lights. A brick ridge stack is at the L end. At the R end are 2 raked roof vents with pigeon holes. The S (L-hand) wing has more alteration. At the R end, in the angle with the central range, is a lintelled doorway to a ramped through passage. To its L are a 2-light mullioned window, a boarded door under a hood mould, a 2-light window with added lean-to on its L side, then a doorway inserted beneath the hood of an original window and an enlarged window to its L (constituting a dwelling formerly known as Garden House). In the upper storey is an added flat-roofed half dormer, and windows to centre and R without their original mullions.

The gable end of the S wing has an added conservatory lower R and a 2-light casement in the upper storey in an original opening with hood mould. The gable end of the N wing has a 3-light window in the lower storey with wooden mullions, small-pane glazing and a stone lintel. In the upper storey is a 2-light mullioned window with small-pane glazing and hood mould.

The N elevation of the N wing has mainly lintelled openings and has a stack rising from the eaves L of centre. At the L end is a blind window, to the R of which is a half-glazed panelled door with small-pane overlight, and then an added lean-to. Further R are 2 windows with replaced 2-light casements, between which is a doorway with boarded door. In the upper storey are windows beneath the eaves R and L of centre, both infilled with brick, and smaller outer windows, of which the L-hand is blind.

The ground falls away at the rear of the block and the rear of the central range incorporates a basement. Openings to the rear elevation are mainly under large stone lintels. A central projecting gabled bay has a depressed round arch to the basement. In the lower storey is a 2-light window with small-pane iron-frame glazing and a boarded loft door, above which are 3 stepped pigeon holes. The flanking 2-window elevations have shorter windows in the upper storey. Some retain 2-light iron-frame glazing, others are replaced. Doors and windows are missing from all the basement openings. The L-hand side has 2 outer doorways with 2 windows between. The R-hand side has a wide arched doorway similar to the central bay, and a window and lintelled doorway at the R end.

A similar basement doorway is in the S return wall of the central range, above which the range is 2-window, blind to the L side and with small-pane glazing lower R. The S wall of the S wing has a doorway to the ramped through passage at the L end. In the upper storey are 3 stepped windows to the L side, of which the outer windows are blind, above which is a round metal vent with conical cap. On the R side the wing incorporates the rear of the former Garden Cottage. This has an added brick stack rising from the eaves, to the R of which are blind lintelled windows in both storeys. A 4-pane sash is lower R, while to the L is a window with inserted 2-light casement and an upper storey window heightened to become a flat-roofed half dormer.

Listed grade II* for its architectural interest as an especially fine and well-preserved C19 estate building, and as an integral component of the extensive outbuildings associated with Talacre Abbey.