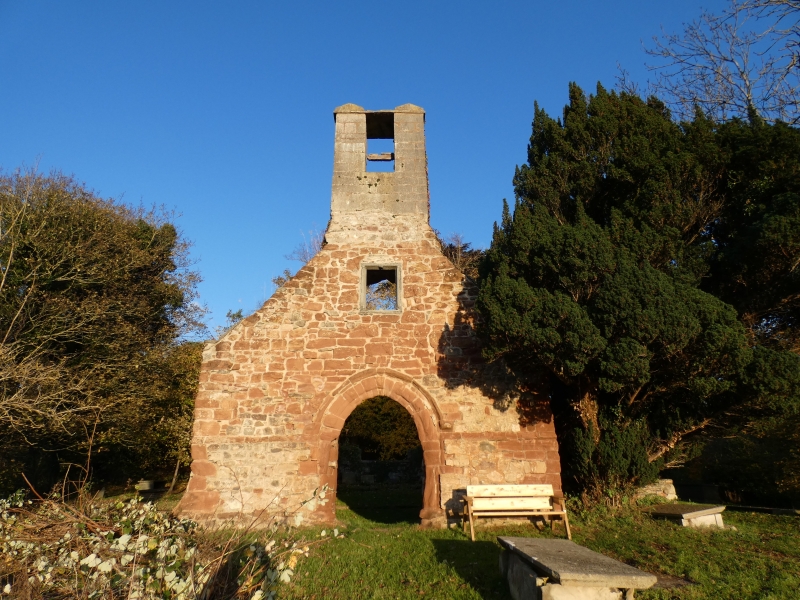 Location: Strikingly located within a raised and revetted churchyard on the eastern slope of the Vale of Clwyd, approximately 0.5km N of the village centre and 200m SW of Llanbedr hall; accessed via a footpath

First mentioned in the Lincoln 'Taxatio' of 1291 and valued at £418 in the 'Valor' of 1535. The fabric is of two main periods; the western half is probably late C13, and the eastern half a rebuild or extension of the C14 or C15. With the exception of a post-Reformation 2-light mullioned window to the former bell loft and a first-half C19 bellcote, the surviving openings, such as they are, are medieval, and the W, S and (blocked) N entrances belong to the primary construction phase. The church was abandoned in 1863 in favour of a new parish church, built at the expense of Mr Jesse of Llanbedr Hall to designs by Poundley and Walker.

The church is currently a roofless ruin and with the exception of the W gable, which survives to full height, the walls have been reduced to a height of some 2m. A late medieval timber-framed S porch, recorded as still standing in 1966, has now gone; some of its rotten members are stacked in the NW corner.

Ruins of former parish church. Of single cell plan with walls reduced except at the W end where full height. The fabric is of two phases of construction, distinguished by clear masonry breaks to the N and S nave walls. The earlier, western half is mostly of red sandstone rubble construction; the eastern is mostly of limestone and slatestone rubble; there is evidence for the walls having formerly been externally rendered and limewashed. The masonry of the W gable has suffered much weather erosion. It has a high chamfered plinth and a pointed-arched central entrance with returned label. Above this is a 2-light bell-loft window with dressed slate jambs and an oak mullion. Tall first-half C19 bellcote of limestone ashlar, with plain bell-opening. Double pointed-arched S entrance with square-headed stoup to the R; the low rubble plinth walls of a former timber-framed porch survive. Similar N entrance, though blocked-up with C19 brick. To the L of this is an irregular circular squint, cut through the thickness of the wall and perhaps medieval. It is possible that this relates to a former anchorite's cell.

The later chancel section has the base of a former window on the S side and the surviving sill of a 4-light, hollow-chamfered E tracery window. Several sections of red sandstone Perpendicular tracery lights lie to the E of the chancel and may relate to this. The SE corner has (post-medieval) set-back, slatestone buttressing.

Drawbar holes to W and S entrances, the latter both with four-centred inner arches. The chancel and sanctuary are stepped up and the latter has a depressed-arched sandstone doorway head propped-up against its S wall; projecting keystone inscribed GI IF Wardens 17[3 or 7][ last figure lost].

The W wall retains some large patches of historic lime plaster and limewash. On the R side of the W entrance, approximately 1.8m from ground level are the fragmentary remains of painted decoration which appear to be medieval.