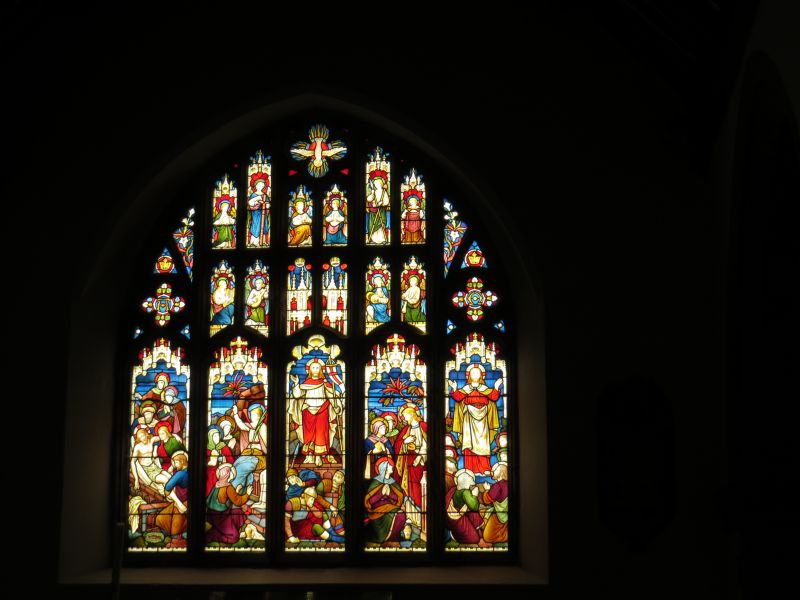 Location: In village of Llandyrnog, in a graveyard which now extends beyond a lane to the east; part lost to road widening at west. Stone churchyard wall with steps up at west; war memorial and sundial within t

The originally round form of the churchyard and the dedication to a Celtic saint both indicate a church of early foundation. Although the first mention of the church of St Tyrnog is in 1254, the present structure is probably of the late C15. The first rector whose name survives was in 1535. A portrait in the vestry is said to be of Bishop Roberts of Bangor, who held the living in commendam until his death in 1665.

Before its C19 restoration the church was studied by Glynne in 1847 and by Lloyd-Williams and Underwood in 1872. It was of the 2-nave type frequently found in the Vale of Clwyd. There were porches both to the north and south. There was a bellcote for 2 bells over the west end of the north nave. Glynne assigned all the older windows to the Third Pointed period. There were complete barrel ceilings concealing the mediaeval roof carpentry, and there was a west gallery with an organ; but the gallery was removed prior to the main restoration and a new organ presented by Miss Maddocks in 1864.

In 1876 a thorough restoration was carried out by W E Nesfield at a cost of £2,186, the church being re-opened in March 1878. The principal donor was P S Humberston of Glan-y-wern. Another major donor was H R Hughes, and as Nesfield had just completed the transformation of Kinmel for him he may have suggested the choice of architect.

Nesfield closed the north doorway, removed the north porch and rebuilt the south porch (which contains his idiosyncratic detailing). The render of the exterior generally has been wrongly ascribed to Nesfield, though completely restored by him. Lloyd-Williams and Underwood's drawing shows the original main east window (to the north nave) has been closely followed in the restoration, but not that of the south nave. The interior was regularly pewed and a fine chancel formed, most of the interior fittings being new. The mediaeval glass of the main east window was restored by Kempe (some of it being found in the churchyard adjacent to the east wall). It has recently been further restored.

The windows all date from the C19 restoration. The main east window (to the north nave) is in Perpendicular style, closely following the mediaeval original. It is of five lights, with a close-fitting label mould with head-stops. The window of the south nave is of 3 lights, its label mould lacking stops. The 3 windows of the north side and the eastern window of the south side have square heads and simple label moulds everted at the ends, the lights having cusped or ogee heads. The other 2 windows of the south side have 4-centred arches. At the west end is a small 2-light window above the west door in the north nave and a large 5-light traceried window in the south nave.

The south porch, by Nesfield, is timber-framed above a tall plinth wall of stone. Small panels below eaves, close studding above brattished tie beam. The panels are in pink parget with a variety of circular motifs. Similar motifs appear on the timber brackets to the cantilevered projections of the wallplates. There is a deep verge with bargeboards. The porch door is 4-centred with simple wrought iron hinges and studded battens. The west door has fine wrought iron hinges in early Gothic style.

The church is entered by the south porch, which is paved in small red quarry tiles. There are 2 dissimilar mediaeval roof trusses, one perhaps from each of the 2 original porches. The purlins have run-out carved chamfer mouldings. Main door in a 2-centred arch.

The interior is dominated by its roof carpentry, the north nave in 10 bays and the south nave in 8, the trusses of both with braced collar beams and each roof slope with two purlins and cusped wind bracing. The naves are separated by an arcade of 5 arches on octagonal columns, imitating the earlier arcade but with more regularity of design. The floor is stone, mostly carpeted. The naves are pewed as one, with 3 banks of pews. Octagonal carved Gothic pulpit with iron handrail to the left of the chancel step in the north nave, and lectern to right, both by Nesfield.

There are 2 steps up to the chancel in the north nave, with a low wall each side. Two choir stalls each side, with rather formalised poppyheads at the ends of the men's stalls. Gothic floral motifs are shallowly indented in the brass Communion rails; there is no gate. The sanctuary floor is of red, white and black tiles with inset lozenge panels of encaustic tiles representing the 4 evangelists. The altar step is also in encaustic tiles, and there is a cladding of embossed arabesque green and blue tiles for the full width of the east wall (in the style of C16 Moorish cuenca tiles, as used elsewhere by Nesfield; probably manufactured by Maw & Co of Jackfield).

The south nave is closed at east by a Gothic vestry screen, with the organ at the left. Children's pews at the right. The font is C19 Gothic, octagonal, in yellow limestone, standing on a raised plinth at the west end.

The stained glass of the east window of the chancel is mediaeval, restored in the C19 and again recently, with the Crucifixion at centre; in its themes both the Apostles' Creed and the Seven Sacraments have been identified, though the other lights are more or less jumbled: Glynne (1847) noted the sentence 'venturus est judicare vivos ... '. The stained glass of the other windows dates from the C19 restoration. The window nearest to west in the north side features St Tyrnog, holding his church.

There are numerous wall monuments in marble or brass, including one with arms above a broken pediment, to Henry Powell of Glan-y-wern, 1749; another in Classical form with arms and an urn, to Edward Maddocks of Vron, armiger, 1758; another in Regency style to Richard Edmunds of Pentre-mawr, 1815. At west is a monument to Sir J Ashpool, 1722, classical with cornice and side scrolls, and one to John Ashpoole in the form of a lifted veil. Another in Regency style to Thomas Evans of Cotton Hall, 1831, with lamp. There is a large lozenge hatchment in the south nave.

A fine church of the Vale of Clwyd double-nave type, with mediaeval roof and good mediaeval stained glass; restored by W E Nesfield.