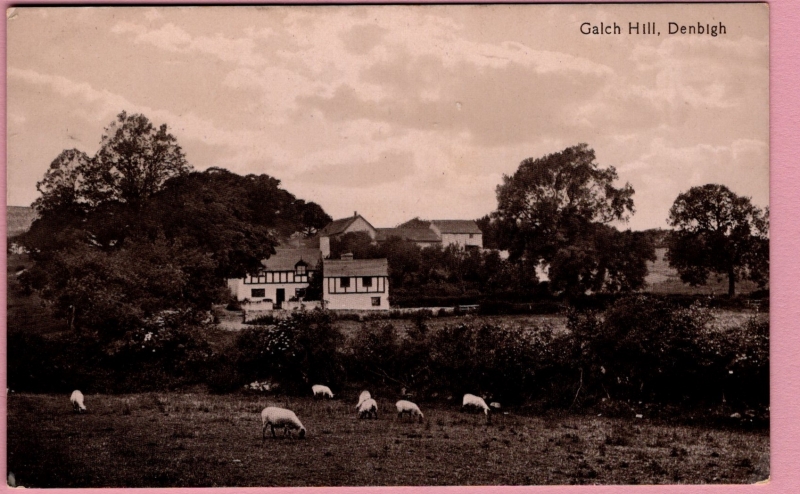 Location: Located on an elevated site overlooking Denbigh approximately 750m to the E; accessed via a drive running S from the road and set back behind a low rubble-walled forecourt.

Galch Hill was the seat of a junior branch of the important local family of Myddleton, whose senior line was seated at nearby Gwaenynog. The present building is probably second-quarter C16 and is likely to have been built by Richard Myddleton (c1508-75), Governor of Denbigh Castle. Amongst his nine sons born here were Sir Hugh Myddleton (1560-1631) and Sir Thomas Myddleton (1550-1631). The former was an entrepreneur who served variously as Alderman, Recorder and MP for Denbigh. He is most famous for his New River project of 1609, for improving London's water supply. Sir Thomas was an extraordinary entrepreneur-businessman who was a founder member of the East India Company, universal banker and money lender and financier of buccaneering expeditions under King James. In 1595 he purchased Chirk Castle and its lands, thereby founding that branch of the Myddletons; in 1613 he was created Lord Mayor of London.

Small storeyed end chimney house, formerly of inside cross-passage plan and with near-contemporary rear wing producing an L-plan. Of whitened rubble construction with vertically-studded, timber-framed first floor and renewed slate roof with slab copings to the gable ends; plain quadrant kneelers to the R (and both sides to the rear). Large projecting end chimneys with slated gables. Symmetrical facade with central entrance via 2 modern segmental steps; modern part-glazed door with exposed timber lintel. Three-light flanking wooden mullioned windows with leaded glazing and exposed timber lintels. To the L of the entrance is a modern plaque recording the birthplace of Thomas and Hugh Myddleton. The upper floor has black painted studding and whitened brick infill. Two-light leaded windows breaking the eaves and contained within gabled wooden dormers with oversailing eaves, plain bargeboards and spiked finials. Modern windows to rear wing, and a modern porch addition extruded in the angle of the R chimney breast. In front of this the original well has been uncovered; this now has a modern stone parapet.

Beamed ceilings to former hall (L) and parlour (R), with broach-stopped main beams and stopped-chamfered joists (some to the latter modern replacements). Large fireplace to the hall with flat chamfered bressummer. Tudor-arched wooden entrance to the rear, leading to the secondary wing which also has a beamed, chamfered ceiling. Plain C19 straight-flight stair to the upper floor (this and the entrance hall occupying part of the former hall).