A Grade I Listed Building in Denbigh, Denbighshire 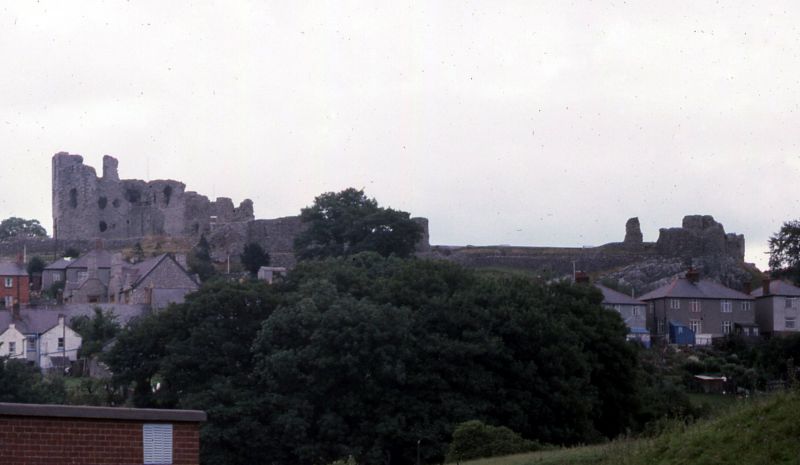 Location: Prominently-sited at the southern end of the Old Town, with commanding views over the Vale of Clwyd.

Denbigh castle was built by Henry de Lacy, Earl of Lincoln as part of a borough-town foundation under license from King Edward Ist. Begun in 1282, it is likely that the first phase, which enclosed the southern and western sides of the castle and continued to define the boundary of the associated town, was complete by 1294. In around 1295 the N and W sides were constructed, thereby dividing the castle proper off from the town; this second phase is likely to have been completed by 1311. This later work, which includes the extraordinary gatehouse and a series of complex mantlets with postern gate and western sallyport, is regarded as one of the most accomplished pieces of contemporary military architecture in Wales and is almost certainly the work of Master James of St. George, Edward Ist's famous Savoyard master mason. Indeed, the sophistication of the gatehouse block exceeds anything attempted at Caernarvon, Conwy or Harlech.
In 1294, when the castle was still under construction, it fell to Madog ap Llewelyn in a widespread Welsh uprising known as Madog's Rebellion. This was clearly the inspiration for the more sophisticated building programme (which included the heightening of the existing walls) implemented in the following year. Earl Henry's son and heir, Edmund de Lacy, is said to have fallen to his death in the Denbigh castle well in 1308; the earl himself died in 1311. During the Glyndwr rebellion the castle was held for the crown and was not taken. During the Wars of the Roses, however, the castle was a major Yorkist centre. It was consequently subjected to frequent harrying by Lancastrian forces under Jasper Tudor, Earl of Pembroke, who in 1468, together with Dafydd ap Siencyn (the 'Welsh Robin Hood'), launched a failed assault on the castle, though managed to burn the town and suburbs.
During the Civil War the castle and old town were garrisoned and defended for the king by Colonel William Salesbury, a redoubtable commander nick-named 'Hen Hosanau Gleision ('Old blue stockings'). The famous siege of Denbigh under the parliamentarian generals Middleton and Mytton lasted for some nine months, during which time 'brave Denbigh' valiantly held out to much royalist acclaim (a contemporary poem describes the 'palace of Dame Loyalltie...surrounded closely with a narrow sea of black rebellion'). King Charles had visited Salesbury at Denbigh in September 1645, staying for three days in what became known as the King's Tower. As a consequence of this, Salesbury resolved to hold the castle at all costs with his five-hundred-strong garrison. When Denbigh finally capitulated on 26th October 1646 (on very favourable terms), it was only after the king had personally ordered Salesbury to do so; it was the last major main-land fortress in Britain to fall.
Following the surrender the castle was used as a prison for captured royalists, during which time it was twice attacked by forces under Major Dolben and Captain Chambres, who attempted to take back the fortress and release the captives. The castle was finally slighted in 1660 and was subsequently used as an (informal) quarry.

Ruins of a large castle complex; of rough-dressed, limestone construction on rock foundations, with buff, brown and greenish sandstone dressings and smooth limestone facings. The castle consists of a roughly oval enclosure with a main gatehouse at the upper (northern) end and a postern gate to the SE. The southern and western sides form the earliest work and include four drum towers: (from N to S) the Bishop's Tower; the Tower-Next-Treasure House; the Treasure House Tower, and finally the Postern Tower, guarding the Upper (postern) Gate. A large mantlet projects in front of the walls, the section to the W containing an elaborate sallyport and that to the S guarding the postern gate and associated with a large dry moat on this side.
The N and E sides represent the second phase and feature a series of large polygonal towers with the gatehouse complex as the focus. The latter consists of 3 conjoined octagonal towers enclosing a central enclosed octagon in a triangular plan. The towers were originally of 3 stages with surmounting battlements and battered plinths; they are known as the Porter's Lodge Tower, the Prison Tower and (to the rear) the Badness Tower. The entrance is between the two front towers and gives onto a heavily-defended a passage formerly with drawbridge, gates and 2 portcullises, together with a series of murder holes and lateral arrow slits. The passage originally led to an octagonal vaulted entrance hall (now open) with the entrance into the castle ward to the R, between the Prison and Badness towers. The Gatehouse is now much ruined and only the Prison Tower retains its upper stage; a former barbican has gone. The front entrance has a multiple four-centred arch which supports a projecting upper stage with chequer-work decoration. In the centre, contained within a trefoil-headed, heavily-moulded niche, is a weathered sculpture of a seated figure, probably Edward Ist. To the W of the gatehouse complex is the remains of the Red Tower.
To the SE is the Great Kitchen Tower (later called King Charles' Tower), with the White Chamber Tower beyond. The ruins of the former Great Hall lie against the wall between the two towers with the dais end towards the latter. S of this is a large solar block, known as the Green Chambers; this has a formerly vaulted undercroft with (heavily-weathered) Green Man carving to two springing stones.