Lleweni Hall, including Stables to the NE 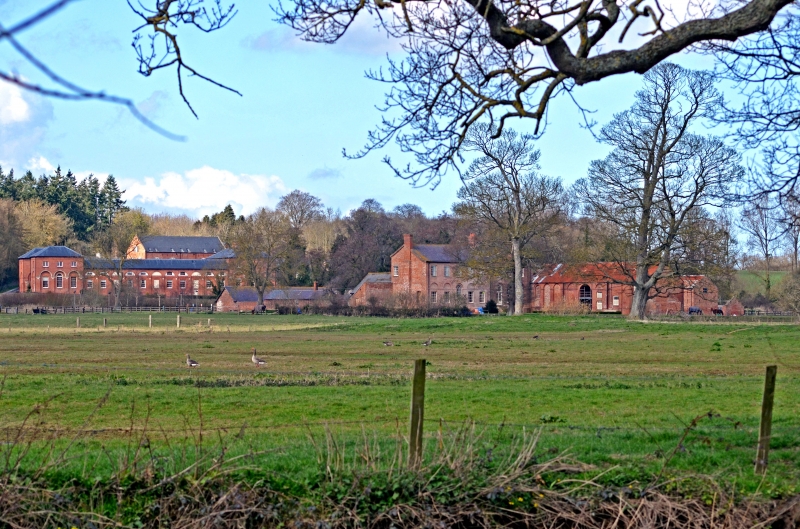 Entry Name: Lleweni Hall, including Stables to the NE

Location: Situated in its own grounds to the north-east of Denbigh, close to the boundary with Aberwheeler Community. Reached by long drives off the lane from Brookhouse to Waen and from the Mold Road.

A country seat has existed here since medieval times although the oldest origins of the present building are sub-medievaI and most of the surviving structure relates to the late C18 rebuilding. Lleweni was the home of the Salusbury family who were amongst the most prominent in North Wales from C15 to C17 and in C18 Dr Johnson stayed here as a guest of Mrs Thrale, a member of the family. The original medieval house must have been one of the finest in Wales as Fenton described the hall as far better than the great hall at Gloddaeth. In late C17 Sir Robert Cotton had designs for a new house prepared but only its north wing was built and as it was known as the 'Red Wing' it was presumably of brick. In early C18 a formal courtyard was created and in the later C18 a new Gothick front was added to the north side of the Red Wing. The major remodelling of the late C18 was for Thomas Fitzmaurice (Earl of Shelburne) who bought Lleweni between 1775 and 1780. Together these additions made it into a vast T-shaped country house reputedly with 100 rooms. This c1780 work is believed to be the work of Thomas Sandby, architect of London, as there are surviving drawings by him for the great Bleachworks at Lleweni which were intended to provide work for the tenants, bleaching the linen from the flax grown on Fitzmaurice's Irish estates. However in 1810 Viscount Kirkwall (son of Thomas Fitzmaurice) put Lleweni up for sale and it was bought by Revd Edward Hughes of Kinmel. His son demolished much of the house between 1816 and 1818 reputedly because it would not suit his wife's health but possibly an error on the part of his land agent as Hughes apparently deeply regretted the destruction of the old house. In 1879 Lleweni was bought by Mr Roberts and c1890 Miss Roberts founded a Model Dairy School here for the training of young women. In 1896 it was described as the finest dairy school in England and Wales. Further demolition of the house was carried out in 1928 but despite this a significant amount remains.

The surviving c1770's structure represents part of the southern part of the once vast Lleweni Hall. An engraving from Angus' 'Seats of the Nobility' published in 1787 shows that there were at least three large wings and that the present pedimented block may have been at the corner between the south and west ranges.

2-storeys and basement and constructed of red brick under a slate roof with brick chimneys. Small-pane sash windows throughout with cambered voussoired heads. The north end has a broad and advanced pedimented bay on both sides; that to the east (now the garden front) is 3-windows, that to the west (facing the farmyard) is 1-window. The dentil cornice on the garden front is continued across this bay to close the pediment and there is a simpler cornice on the other side. The garden front is 5 3-windows wide with 12-pane sashes to left and, in the pedimented bay to right, three 16-pane sashes to 1st floor over tall 20-pane sashes with round-arched fanlight heads; the left hand opening has been given French windows. All ground floor windows are set within distinctive tall round-arched recesses but only those windows under the pediment are themselves round-headed and the central of the 5-bay section is set higher up lighting a narrow 'hallway' inside. Stone steps up to the French windows. At right angles is a 9-bay range of former stables and barn; originally with central pediment and cupola (see old illustration). Large central arch is blocked; narrower stepped arches to the upper end and bays articulated by pilasters to the lower end with later stable windows. Corrugated roof following removal of upper storey. The west side has blind roundel to the pediment and one window per floor below. One bay of similar windows to right and then the building has been altered by reduction in depth; now with lean-to. Outbuilding ranges adjoin to north and outside steps forming main entrance into house in the angle.

Entrance is onto the tall kitchen which is remarkable for its pair of full-height Doric columns; they are said to be constructed from a plaster surround to an iron post. From there runs a slate-flagged corridor. Of the C18 work the house retains a wide variety of egg and dart cornices, good Adamesque fire surrounds with iron grates and 6-panel doors. There is also a re-sited late C17 or C18 balustrade to the lower staircase to the south of the present and later main stairs. Lleweni has especially fine cellars of several phases of construction but dating at least from the C17 and confirming the earlier origins of the surviving structure. The main chamber is groin vaulted carried on a central pier. This area was used as a dining hall for students at the renowned Dairy School. The blocked window under the garden steps suggests that this may be part of the late C17 house. There is a root cellar to north and a blocked door into the former stable range. On the other side is a wine cellar, similarly vaulted with central pier and with further blocked openings indicating that the cellars originally continued further south.

Graded II* on account of the historical importance of Lleweni and for the interest of the surviving, largely C18, structure, possibly one of the few surviving works by Thomas Sandby.