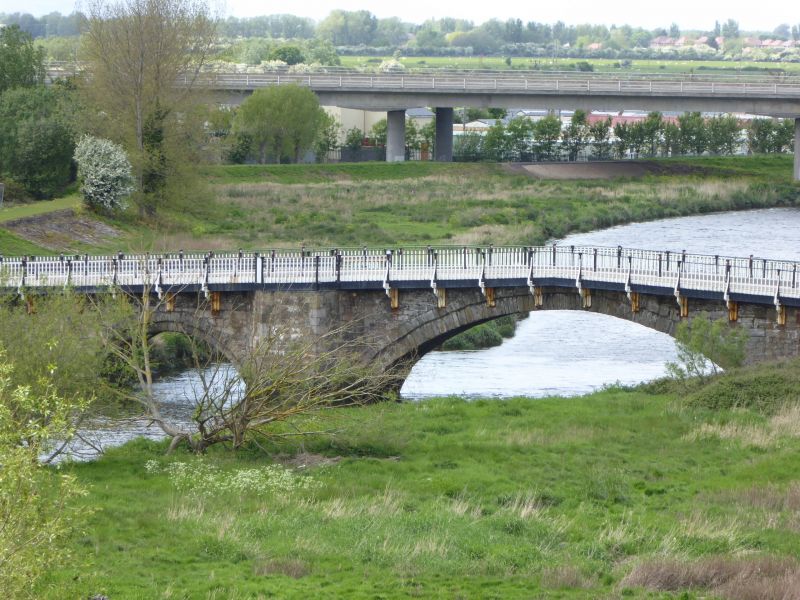 Location: Spans the river Clwyd to form the only access to the town from the W.

The earliest known bridge on the site was C13 and was a timber bridge rebuilt following destruction in c1277. In c1358, the first stone bridge was built, and repairs to it were recorded in 1372 and 1382. The bridge was again rebuilt in 1595, and the stone structure which survives is partially of this date, although substantial alterations to its form have taken place in more recent times, and it is possible that the early bridge had 3 arches.

Sandstone arch bridge, with 2 arches of unequal span, and a single splayed squared cutwater between them. Roughly coursed and squared sandstone, the coursing finer in the cutwaters which appear to be a separate phase of construction. Voussoirs to arches, the stonework stepped out over them to form drip moulds. On the SE side, 3 tablets are set into the masonry of the cutwater, one of which is inscribed with the arms of Flint, and is dated 1595. The parapets in the main part of the span were replaced during the C19 with a cast-iron railing supported by heavy brackets. Stone parapets with plain copings survive at either end of the bridge.

Important as an early example of a masonry bridge.