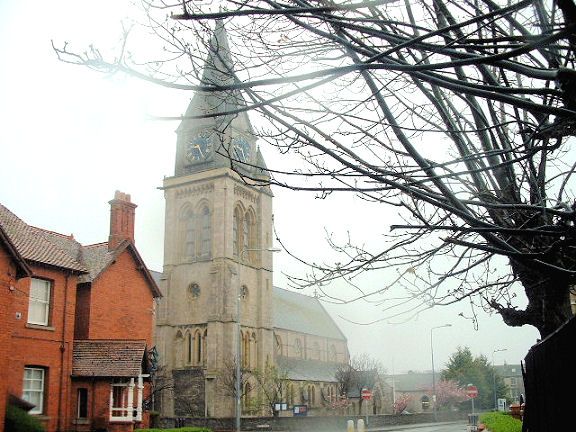 Location: Prominently sited on the corner with Bath Street.

The parish church of the Holy Trinity was perceived to be inadequate to the need of a growing holiday resort by 1857, and George Gilbert Scott was appointed as architect for a new church building. His plan was drawn up in 1860 and the church was finished in 1867, although the spire was not completed until 1875. Fittings were not installed immediately, but were probably part of the original design - the pulpit, reredos and choir stalls were designed by the architect.

Stained glass. Mainly by Ward and Hughes, the windows represent a clear series showing the development of their style over the late C19-early C20: the earliest appear to be those in the lady chapel (with commemoration dates of 1860 and 1867) and in the chancel E window: these are all in a neo-medieval style, as are the eastern-most windows of the S aisle, with commemoration dates of 1869, 1872 and 1875. Similar style to N aisle windows with dates of 1866, 1868 and 1872. Western windows are more purely pictorial (dated 1869 and 1878 and 1890), but SW windows of this aisle, dated 1889 and 1905, are in a renaissance style suggesting the influence of Kempe.

The church is a fine example of high Victorian gothic, and a prominent feature of the townscape.