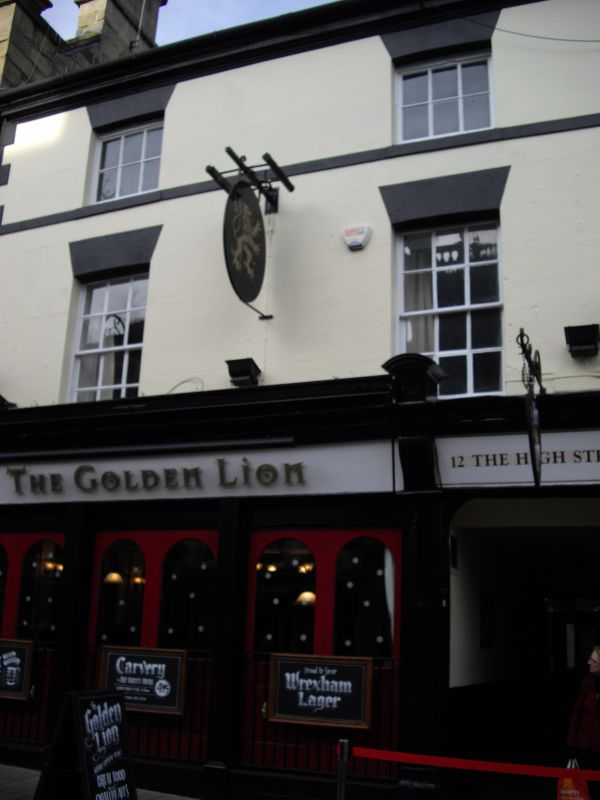 Location: Part of a continuous building line on High Street, between the Butchers' Market and the Midland Bank building.

Public House, until recently divided as 2 units, with public house in rear wing, shop and accommodation in frontage block. The building appears to be C16 in origin, and was a house of some status in the C17. It was partially rebuilt in the late C18, and internal layout and some external detail have been altered several times subsequently. Originally the home of the Pulford family, it had become an inn by 1700, was subsequently subdivided for a time as shops, becoming an inn again by 1740.

3 storeyed 2-window frontage range with intergral short rear wing. One and a half storyed wing beyond. Originally timber framed, but extensively rebuilt in brick, and rendered over, with slate roofs. C19 public house frontage to street, with wide through-passage to right, and entrances to either side, with heavy continuous fascia. Upper windows are sashes with flat arched painted heads, and continuous sill band to low windows of upper storey. Rear wing of frontage building incorporates C19 public house front, with moulded fascia over windows which are now blocked, and 6-panelled door in plain architrave. 2 tripartite sash windows above. Rear wing beyond has paired arched 3-light windows to ground floor (probably late C19), and rendered mock timber cladding.

Timber framing has been exposed in gable wall of frontage building: square panelled framing with middle rail and arched braces. Paired posts at front corner appear to be somewhat later insertions. Stone 4-centred chamfered arched fireplce in rear wall, and a similar fireplce backing onto it in rear room (the wing of the original building). Chamfered and stopped axial ceiling beam in this rear room. Long wing beyond heavily modified internally, but a series of 8 roughly chamfered axial beams and a side-wall chimney (fireplace renewed) remain.