A Grade I Listed Building in Portskewett, Monmouthshire 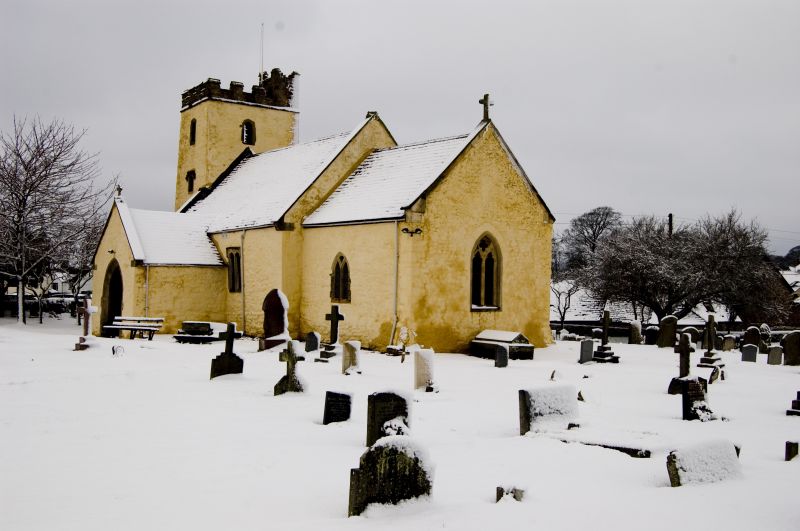 Location: In the centre of Portskewett village at the junction of Main Road and Sudbrook Road.

The nave is Norman with opposed north and south doors (north door blocked) and the chancel arch. The chancel is probably early C14. The tower and porch are probably C16. The west gallery was added in 1818. The church had a Victorian refurnishing and minor restoration and has been little changed since.

The building is constructed from local fine grained grey and red limestone, and coarse sandstone grading into conglomerate, mainly yellow in colour, but with streaks of red. This sandstone/conglomerate is used for some of the dressings. The church has concrete tile roofs. The walls have a battered plinth. The church consists of nave with west gallery, separate chancel, west tower with projecting stair turret and a south porch. The nave south wall has two bays, the large projecting porch being the left hand one. This is gabled with a cross on the apex and has a pointed arch with late C20 double doors. The inner door is also late C20, but is in a flat topped opening with a massive lintel. This is similar in form to the more obviously Norman north door, but the dressings appear much newer. The south east window of the nave is a 2-light one with 4-centred heads, this could be C16. The north wall has a similar window, a stepped buttress which must be Victorian, the blocked north door which has a massive lintel carved with a Maltese cross in relief, and finally a small window high up at the west end to light the gallery and therefore probably 1818 or soon after. Steeply pitched roof with coped gables and an apex cross on the south gable. The chancel has an early C14 Y-tracery window on the south wall, a Victorian 2-light window with trefoil headed lights and a quatrefoil over in the east gable and a round headed lancet in the north wall. Coped east gable with cross. The tower is square and in three stages with a square stair turret on the north east corner. The west wall has a blocked 4-centred arch doorway and above is a 2-light window with a flat head and dripmould, the lights are elliptically headed and could be C17, the jambs and mullion have been recently replaced. String course between the first and second stage. This has a louvred opening with dripmould on the south face. The bell stage has louvred openings on each face, all with 4-centred heads. String to castellated parapet. The stair turret rises above the roof and is also castellated.

The medieval interior features are the walling and the rere-arches of the windows and doors, the plain Norman chancel arch with impost blocks and the tall pointed tower arch. The furnishings are nearly all Victorian. The font could be a recut C15 one. The small west gallery is supposedly of 1818, the panelled front could be but the supports and staircase appear to be c1880 or later. The Rector's stall is dated 1948 and the choir stalls are dated 1956, and the ceiled barrel roof and tie-beams might also be mid C20, but could be earlier. There is said to be a single bell dated 1699.

Included and highly graded as a little changed medieval church.