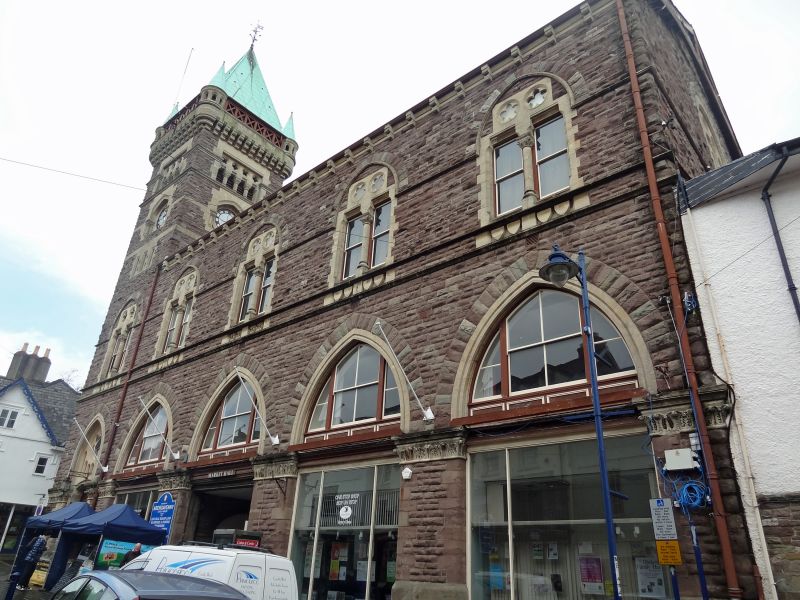 Location: Situated on the main commercial street which runs from south-east to north-west across Abergavenny. This is easily the largest, tallest and most dominant building in Abergavenny, visible in the count

1869-71 (dated), by Wilson and Willcox of Bath after a competition; the contractors were S J Moreland and Sons of Gloucester. The tower clock was presented by Crawshay Bailey of Maindiff Court and is inscribed 'Gilbert and Bland, Croydon 1871'. The northern clock face is said to have been painted black to commemorate the death of Prince Albert, but he died in 1862. The assembly room was re-fitted as a theatre in 1906 and this was modernised in 1996. The building remains remarkably unchanged externally; the market hall is also unaltered.

Built of coursed, rock-faced Old Red Sandstone with Bath limestone ashlar dressings, natural slate roofs. Large rectangular block at the centre of the town and with show fronts to Cross Street and Market Street, with a market hall in the angle behind. The style is rural Early French Gothic, but with some Italian touches. Three storeys, five windows to Cross Street and three windows to Market Street with a tall clock tower on the corner. The ground and first floors are contained within an arcade of five Gothic arches of a transitional pattern, the centre bay containing the main entrance through to the market hall and the left hand arch under the tower the entrance to the main stair to the council chamber and assembly room, now the Municipal Theatre. The arcade is of steeply pointed Gothic arches divided by Romanesque piers with stiff-leaf capitals. The stair door has colonettes, plank doors and an elaborate rose window with six vertical recesses below in the arch head. The other arches are slightly wider, with the market entrance closed by iron gates and the other three shop windows, glazed in three vertical lights, with the lunettes over glazed as triple sashes and lighting the mezzanine. The second floor has five 2-light windows with 1 over 1 pane sashes, divided by a central colonette, Caernarvon heads and paired cinquefoils in the tympanum. Double cill band with shields between. Eaves on stone brackets, large pitched roof hipped at the Market Street end and gabled at the other and with three vent cowls on either side of the ridge.
The lower stages of the tower are part of the main elevation. The first free-standing stage has three arrow slit windows to each face, over which is the clock dial, white with block letters (illuminated at night), black on the north side (see History), over this is the belfry stage with bell louvres, each 4-light with colonettes. Of these features only the clock face appears on the rear elevation of the tower. The top of the tower has machicolated battlements, a fretted balustrade and corner tourelles. These, and the central pyramid roof, are covered in copper and the bright green hue makes them easily visible at distance.
The Market Street elevation is in three bays with the features as before.
The far gable end looms high above The Kings Head Hotel and has a large plate tracery rose window with a central quatrefoil surrounded by eight smaller ones. Arch braced tie-beam gable truss, stack on gable.
The rear elevation is mostly covered by the market hall roof, but the Market Street end has an additional second floor window as before and the top half of a second one. There is also a large central stack on the rear wall.
The market hall projects across the whole rear and has two gabled roofs, the smaller on the left. Plain blind long walls. The large gable has seven graduated windows with a circular window above the largest and widest one in the centre. The smaller gable has three windows. The roofs have a wide glazed section along the ridge.

The building was designed as a multi-purpose one to provide municipal offices and a council chamber, a general market, an assembly room, the corn exchange and the poor law offices; and it still houses all but the last two uses, now out-dated. In the main the interior is plainly finished and a number of spaces have been altered, there remain a number of internal features of note.
There are two main staircases, a stone one in short flights around a central core and a decorative iron one with hardwood treads and a continuous mahogany handrail; this latter one has been partly altered. The assembly room, now the Borough Theatre, has an open roof with very large and elaborate pine trusses with Gothic decoration and a decorated balcony front. It was converted to a theatre in 1906 when it accommodated 600, but it now seats 250. The council chamber, Mayor's Parlour and the committee rooms have deeply coffered ceilings but are otherwise plainly finished and have been altered. The tower houses two fine bells and a clock made by Gilbert and Bland of Croydon, which was presented by Crawshay Bailey in 1871. The corn exchange is top lit and has a 4-bay open-trussed roof. The market hall has a main nave with aisles and a subsidiary nave under a smaller and lower roof. The main roof is supported by two lines of six very tall cast iron posts which support wrought iron Warren girder rafters carrying light wrought iron purlins running the length of the roof; the apex is glazed.

Included for its special interest as an the largest and most prominent secular building in Abergavenny with good architectural qualities as the design of Wilson and Willcox, well known West Country architects of the Victorian period.