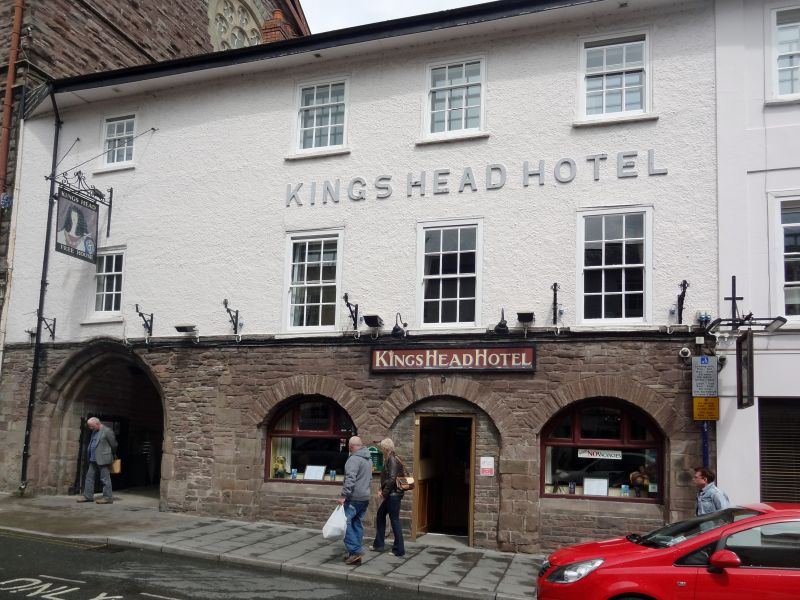 Location: Situated on the main commercial street which runs from south-east to north-west across Abergavenny.

Medieval origins with an early/mid C19 front, dating probably from 1836. The front was probably shortened on the left when the Town Hall was built in 1869.

Red sandstone rubble, faced in roughcast and painted above the ground floor. Double depth plan. Three storeys, four windows, 1 3. On the left is a late medieval gothic arch in dressed stone giving access to yard at rear. This is apparently C15, roll moulded with a steeply pointed arch. The three right hand bays on ground floor including public house entrance are segmentally arched; late C20 windows with transoms flank a plain door. This front was hidden by a more typical late C19 timber pub frontage with arched windows and was tidied up when revealed in recent times. The casement windows on the upper floors reported in the list description are now replaced by 6 over 6 pane sashes on the first floor, except the left hand one which is only 3 over 6. The upper floor ones are all smaller and are also 3 over 6 panes. Deep eaves, low pitch roof with brick stack on either gable, the right hand one may be for No. 59.
Rear elevation not inspected.

The interior of the ground floor is now a single bar space with no clearly datable features. The beamed ceiling is a mixture, some of which are stopped and chamfered but these are probably not in-situ. There is an apparently partly C18 there-and-back-again stair at the right rear.

Included for its special interest as an early C19 building of definite character which retains some earlier fabric including a medieval archway and which has strong group value in the centre of Abergavenny.