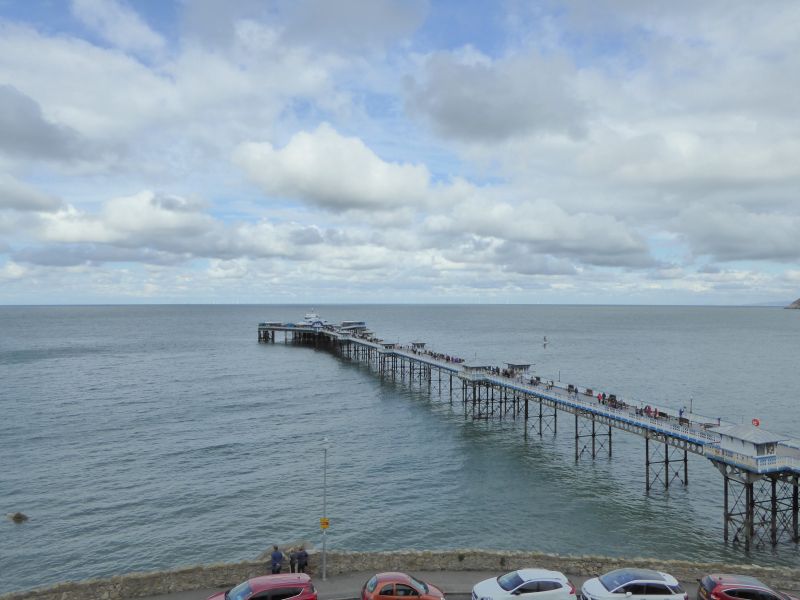 Location: At N end of The Promenade.

The first pier at Llandudno, associated with attempts to make Llandudno a coal exporting harbour for the N wales coalfield was destroyed in the Great Storm of 1859. The present pier was built in 2 main stages. The first portion of the pier opened on 1 August 1877. This comprised a platform 1,234 feet (370m) long, supported by an understructure of piles placed at varying intervals and connected by lattice braces and a platform deck with "a delicately worked fretwork balustrade with hints of Chinoiserie". It joined land at the stone lodge to N of the Grand Hotel. The landward extension spur and baths, to design of B Nelson, opened in 1884. Extension of the pier landwards was basically a sea wall construction with Pier Pavilion at land end adjoining the former Baths Hotel (now the Grand). The Pier Pavilion was a large iron and glass structure in the tradition of Paxton's Crystal Palace, originally with a swimming bath on the lower floor. The main auditorium on the upper floor was cruciform on a level with the Happy Valley Road where the carriage entrance was. The external veranda was added later. The Pavilion was a prestige auditorium and housed political conferences with speakers from Lloyd George to Oswald Moseley, and a wide range of high and popular culture from Adelina Patti to Arthur Askey and George Formby. The pavilion was almost completely destroyed by fire in the mid 1990s, with little remaining but parts of the verandah.

Seaside pier. Iron piles with bracing support wooden deck with cast iron balustrade with Islamic pattern; iron lampstandards on balustrade. The pier runs straight NE from a stone lodge on Happy Valley Road to a polygonal platform at the seaward end; the landing stage platforms are modern. There is a later C19 extension running back from the lodge parallel to the shore.

The lodge is in grey stone, single storey, with slate roof. There are 4 rectangular kiosks to each side of pier, each with shallow-pitch roof with deep eaves with iron brackets; boarded stallrisers, square windows, central doorway facing pier square. Then 2 longer similar kiosks (just SW of the broader end platform) which are public conveniences. Near Happy Valley Road entrance there is an octagonal kiosk in similar style. On pier end platform, central large polygonal pavilion with, at NE end, taller octagonal block with ornate cupola, finial, cresting, ornate iron brackets to eaves, and iron columns; then towards SW, lower section with shallow roof with dormers and lantern to SW; verandah; iron stallrisers with dolphin reliefs. Two flanking hexagonal pavilions in the same style, but without ornate cupolas. At landward end, near S entrance, ornate cast iron columns and staircase survive from Pier Pavilion.

Kiosks and stalls along the pier to S of Grand Hotel appear to be modern.

Graded II* as the finest Victorian pleasure pier in Wales.