A Grade I Listed Building in Llandwrog, Gwynedd 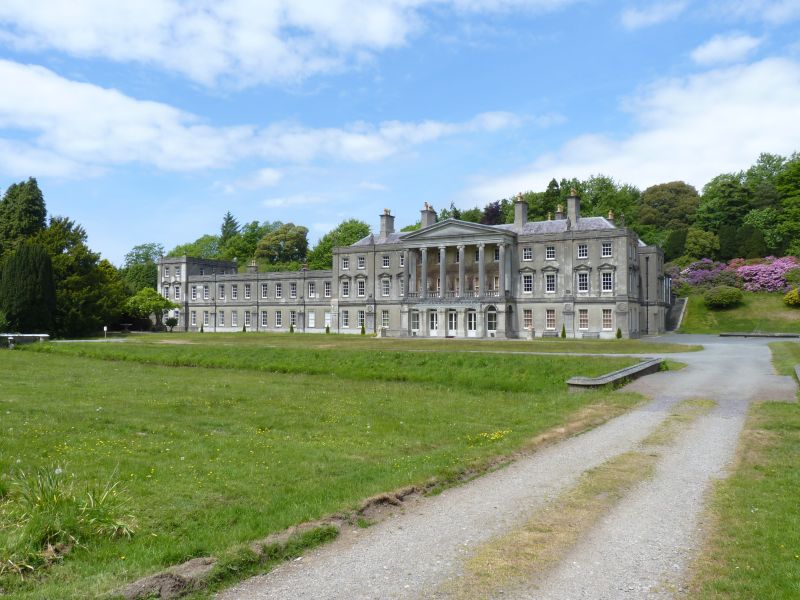 Location: Set in its own extensive grounds on east side of the A499 at Llandwrog; the house is reached by a short drive from the grand lodge. Built on a platform site.

The present house is largely that built in 1836-48 to the designs of Edward Haycock, architect of Shrewsbury. It succeeded at least three previous houses on the site. Origins predate a c1600 rebuilding and there was a second rebuilding in 1751; in 1812 it was described as a 'moderate-sized brick mansion'. In 1836 this house was destroyed by a major fire and the rebuilding that followed is largely the house that exists today. It was extended to the west in 1889-90 and in recent years has been converted to college use.

Glynllifon was the seat of the Glynn family until 1700 when it passed to Thomas Wynn of Boduan. Sir Thomas John Wynn became 1st Lord Newborough in 1776. The title died out late in the C19 when the estate was inherited by F G Wynn, one of the 3rd Lord Newborough's sons.

Neoclassical 3-storey stone mansion with attached lower service courtyard to west; the main elevation faces south. Built of stone with rendered elevations under a slate roof with rendered chimney stacks topped by moulded cornices and an Italianate water tank. The design of the symmetrical 13-bay main block is dominated by the central hexastyle pedimented 'portico'. This has a 1st floor balustraded loggia, with Ionic Mona marble columns, over an arcaded ground floor entrance. Either side of this the front is divided into paired bays flanked by pilasters that rise from a deep 1st floor sill band, ornamented with Greek fret pattern. The panelled parapet is crowned by statuary and Mercury is at the pediment apex; within the 1st floor loggia are statues of the four seasons. The 1st floor windows to these side bays have bracketed pediments and altogether the emphasis given to the 1st floor is as in a Palladian 'piano nobile'. Below this level the pilasters have wreaths over panelled dies. The central ground floor bays are arcaded with impost band and bracketed iron porte-cochere serving the circular drive. The windows are all 9 and 12-pane sashes except to the centre where they are 4-pane to 1st floor and French windows to entrance. The adjoining service courtyard has a continuous elevation to south of 10 two-storey bays and a three-storey pavilion block to west end. The Greek fret pattern sill band continues from the main block and similar pilasters break up the facade into a 2 3 3 2 design. 12-pane sashes throughout with the bracketed pediments only repeated over the 1st floor windows in the end block. The parapet of the 2-storey part is crowned by urns while the four corners of the 3-storey end block have eagles, a popular motif for the Wynn family.

The east elevation facing up the vista below Coed y Terrace is of 2 5 2 bays, the outer ones projected and all with similar detail. Doorway onto axial corridor in angle. Beyond this and stepped up the hillside is the deep conservatory with tall all-round windows. Parallel flight of stone steps.

To the west is the large kitchen courtyard entered from the west under a semicircular arched and tunnel-vaulted gateway. The arches have keystones, ramped bases and double gates and the roadway is laid in setts. The rectangular courtyard has lean-to pentice with Ionic iron columns and the elevations have mostly 6 and 9-pane sash windows - some blocked. At the south-east corner is a grand pedimented portico said to have been salvaged from the ruins of the C18 house. It has paired Doric columns under a triglyph frieze; modern door in semicircular arched doorway. The right hand (south) side has pilasters and a datestone FGW 1890 indicating remodelling of this area by Hon F G Wynn, soon after he inherited the estate (but not the title) in 1888; there is also a rainwater head dated 1889 within the quadrangular light well. At the south-west corner is a relocated ornate iron lampstandard. The left hand (north) side retains some fabric from the C18 house.

At the rear is the game larder which was incorporated into the present house at the time of the rebuilding. It is a circular stuccoed stone building with a lime-washed brick. Beneath it is the former ice-pit which was also accessed from the high level path that runs behind the house where there is a hatch.

The main entance is to the south onto a grand Classical hall with tetrastyle screen of Ionic marble columns in front of the central staircase. Other detail includes egg and dart cornices, panelled shutters and marble chimneypiece with recessed Ionic columns. The axial corridor runs in front of the stairs with doors recessed within panelled segmental archways to either side. Fine cantilevered imperial stone staircase with scrolled wooden handrail over iron balustrade of paired uprights in the manner of palm trees; S-shaped tread ends. The stairs are lit by a fine Neo-classical pedimented tripartite window at the half landing; enriched by black marble columns and stained glass. This window is described by Mostyn Lewis as the largest of its kind in North Wales and the design suggests that it was probably made by David Evans.

The main rooms of the house retain fine marble fireplaces, gilded cornices and mahogany doors with ebony beading to the panels.

To the right were the Morning Room, Library and Dining Room. The axial corridor runs under a further archway with reeded pilastered architrave towards the doorway on the east elevation. The Morning Room to south was entered directly from the entrance hall. It retains fine white marble fireplace with floral carving around Classical scene and an ornate cornice. The adjacent former Library (now Room 1) retains black marble volute bracketed chimneypiece and a Neo-classical fire grate; this room also has an ornate gold leaf anthemion cornice. The doorway to the former Dining Room opposite has an architrave with deeply bracketed cornice. This room was not accessible at time of inspection but is recorded as having two marble columns in antis and a grey marble fireplace with twin Ionic columns (characteristic of the Glynllifon fireplaces). Between this and the main hall the passage returns to the rear with modillion cornice, semicircular arched doorway with half-glazed door and fanlight. Beyond that is the service corridor that leads to the kitchens and central light well and returns back to join the western arm of the main axial corridor. A branch of this service corridor leads to what is now the staff office but was probably originally the housekeeper's office and has yet another variation on the theme of the anthemion cornice. The western arm of the main corridor formerly led to the Smoking Room and Office. It retains similar archways and doors with fanlights and at its western end opens onto the kitchen courtyard although the main doorway from this is that with the pedimented portico at the south-east corner.

The staircase balustrade continues along the 1st floor landing with ornate modillion cornice and ceiling rose. Finely carved corniced architrave to central room and semicircular arched doorways to either end opening onto the 1st floor axial corridor. The principal room is that to the centre which was formerly the grand Drawing Room in 'piano nobile' manner of the kind the Newboroughs would have seen on their long travels in Italy. This room became known as the Organ Room after the addition in 1892 of the Walker and Son two-manual organ at the east end. The long 5-window elevation opens onto the loggia with the statues of the four seasons. Fine ceiling with central rose surrounded by anthemions within an octagonal and rectangular border (chandelier missing); this and the anthemion frieze and console-bracketed cornice are highly gilded. Bracket-pedimented doorcase with broad panelled door. Unusual white marble chimneypiece with paired and panelled octagonal columns and Corinthian derived capitals; the character is almost as if they were designed for cast-iron and executed in marble. Good arched grate retained and contemporary Rococo mirrored overmantel, though altered to base; also gilded pelmets.

To the east are the principal apartments including two rooms over the Morning Room and Library, the former having fine cornice with lions heads. The former main bedroom (now the library) is over the Dining-room and occupies the central part of the east elevation at this level, overlooking one of the main vistas. This retains a fine ceiling with gilded ornament including central rose, triglyph frieze and floral metopes; also gilded Rococo curtain rails. Similar white marble Ionic chimneypiece to that in the Organ Room with especially good glazed tile fireplace with nymphs, swags, iron grate and brass surround; beeded mantel and Rococo over-mirror. Bracket pedimented doorcases to both sides with enriched architraves and broad 6-panel doors opening onto two short corridors off the longer north-south corridor. The latter retains a particularly fine pedimented doorway with Ionic columns, half-glazed coloured glass doors and a painted glass fanlight of particular interest; this again reflects the family's interest in things Italian as the scene is reminiscent of Lago Maggiore. This corridor also gives access to the staircase to the 2nd floor which is a miniature version of the main stairs being also of cantilevered Imperial type and lit by a stained glass window.

At the west end of the 1st floor is the former Billiard Room, more recently converted into a dormitory. It is a lofty 2-storey room with a precipitous gallery around three sides reached by steep, narrow stairs; the gallery is carried on pendant brackets and the gallery front has Ionic columns. Ceiling rose and egg and dart cornice.

Glynllifon has vast vaulted cellars characteristic of a major country house. There are eight in-line chambers under the full length of the house and a further two transverse chambers at each end; there is also a further parallel chamber at the east end under the conservatory. Blocked doors suggest there were once yet more chambers. Brick vaults throughout with rubble walls. In addition to these cellars for boilers, coal and other non-perishable needs there were the separate food cellars accessed from the central quadrangular light well. These consist of seven brick vaulted and slate flagged chambers off an L-shaped corridor; many retain original doors and shelving.

Listed Grade I as a fine Neoclassical country house that is the focal building within an unusually complete example of a C19 estate and a major surviving landscaped park.