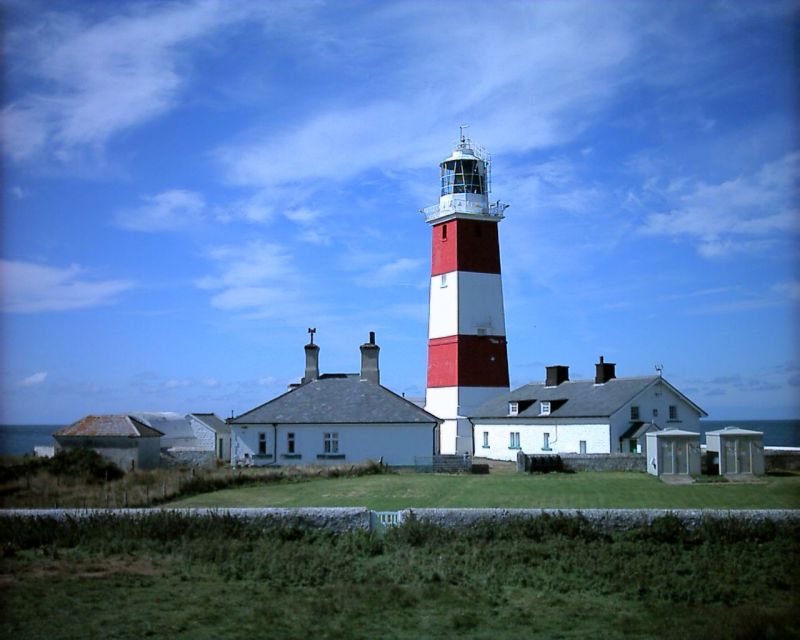 Location: On rising ground at the south end of the island, in a walled enclosure.

The lighthouse marks the division between Cardigan and Caernarvon Bays, and was built in 1821, designed and built by Joseph Nelson for Trinity House. It is the tallest square light tower in Britain at 30.2 m. Originally displaying a fixed light, the lantern was replaced in 1856, and the optic renewed in 1873, when a rotating light was installed. It was electrified in 1973, and the lighthouse was automated in 1987. The attached keepers' dwelling is almost certainly contemporary with the lighthouse. A photograph of 1886 by John Thomas shows the group before the tower was painted.

Lighthouse tower and linked keepers' accommodation. The 30 m high tower is square in plan, reducing in width through its height, an unusual form for a Trinity House building of its date. Limestone ashlar, tooled and painted externally in red and white bands. Entered via lobby which links the tower with the attached stores and keepers' accommodation; small mullioned casement windows in upper floors and moulded cornice to lantern-walkway which has bellied cast iron railings. Canted octagonal lantern has horizontal and inclined vertical glazing bars, metal roof, and top railed balcony (added after 1886).

The keepers' house is linked to the tower at W end by a single storeyed corridor with central doorway and side lights, the accommodation building is single storeyed with attics, a 4-window, double-pile range. Rendered over rubble, whitewashed and with slate roof with overhanging eaves and 2 axial stacks, roof gabled E and half-hipped W. E gable end has 2-window range, gabled porch to left with overhanging eaves. Original windows appear to be 12-pane sashes (3 single on S and pair to right of centre), some are blocked. 2 dormer windows in the roof are also 12-pane sashes.

General store in base of tower, with shallow vaulted slab ceiling; similar room to first floor. Moulded stone risers to stairs, which are cantilevered from the walls of the tower, and have plain cast-iron rails. The cast-iron tube for the weights of the clock-work rotative mechanism for the lantern, is braced to the external walls at second floor level. Service room below the lantern. Optic of 1883 (a first order catadioptric lens with five equal panels, revolving on a bed of mercury) is carried on a cast-iron base, with cylindrical shafts with moulded capitals and brackets.