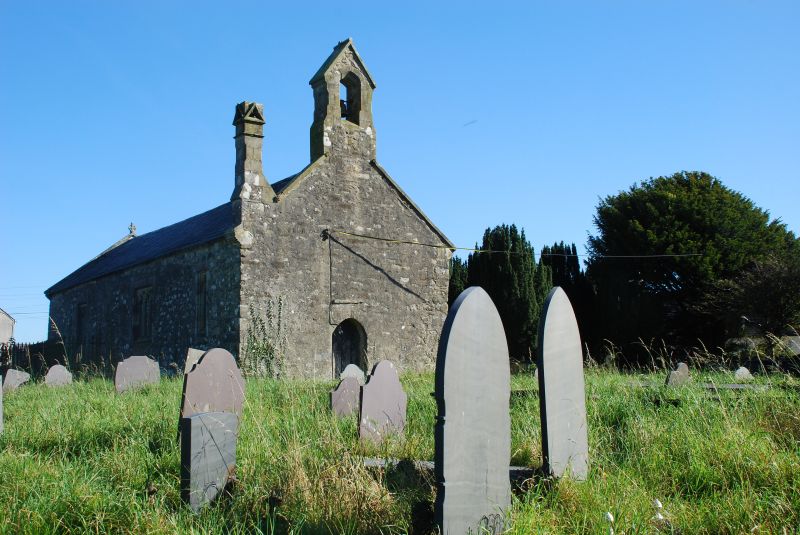 Location: The parish church stands in its churchyard at the centre of the village.

The church is dedicated to the C6 Cornish saint, Cybi, believed to be an early missionary in these parts, and who is said to have struck a stone nearby causing the effusion of waters that became one of the most famous healing wells of Wales. The first incumbent was Llewelyn ap Rhys, in 1395. The nave is medieval, with late C15 chancel. The church was restored in 1879. Modern porch.

Built of rubble stonework, with a graded slate roof between coped gable ends. A single cell structure with a C19 open gabled S porch, with thick copings and a terminal floriated cross. Tall bellcote at the W end, and a C19 ashlar chimney stack to the vestry. Small single, double and 3-light C19 windows with square heads and cusped tracery to both sides, and a Perpendicular 3-light E window with panel tracery, the mullions renewed. A rectangular blocked opening at the junction of nave and chancel on the N side. The W door has a roughly formed rubble arch and a horizontal drip over.

The churchyard contains the grave of Daffy Owen, (Dew Wen o Elfin) a local poet, one of a number of bards of the area which flourished in the early C19.

A simple interior of one cell, a nave of 6 roof bays, having two late medieval arch-braced trusses at the E end, the upper parts of which were once cusped. The other 5 trusses are probably of the C19 restoration. Exposed rafters. The walls are plastered, some wall paintings having been recorded but are not now visible, and the church has red and black quarry tiles on the exposed floor areas. The E end is raised by one step.

Fittings: Pulpit of pine, C19, an octagon with 3 approach steps. Font a simple octagonal limestone bowl remounted in the C19. Communion rail of paired columns and a simple rail. The Altar is a table of the C18 or early C19 with stretchers. A free-standing elaborately carved aumbrey cupboard on a bracketed stand. C19 pine pews.

Monuments: On the N wall, from the W, (a) an oak classical aedicule carved and painted by Jonah Jones, with an eagle on a wreath mounted over a pediment, to John Clough Williams-Ellis (Sion Pentyrch] of Glasfryn and Brondanw, tutor of Sidney Sussex College, Cambridge, and rector of Gayton, Northants, d.1913, the monument probably designed by his architect son, Clough Williams-Ellis; (b) Gabled white marble tablet on slate, by Seddon of Liverpool, to John Lloyd of Trallwyn, d.1855. On the S wall (c) an alabaster aedicule with a wreath arch on fluted pilasters, to Roger Williams-Ellis, RWF, d.1900 at Krugersdorp aged 19. (c) White marble corniced tablet on slate, to Owen Rowland of Ynys-Legi, d.1927 and wife.

Misc: a poor box set into the rear pew, an octagonal hollowed-out post with a hinged lid, probably of the C17.

Included at Grade II* as a well preserved largely medieval church at the centre of the nucleated village of Llangybi, and one retaining a number of features of interest internally.