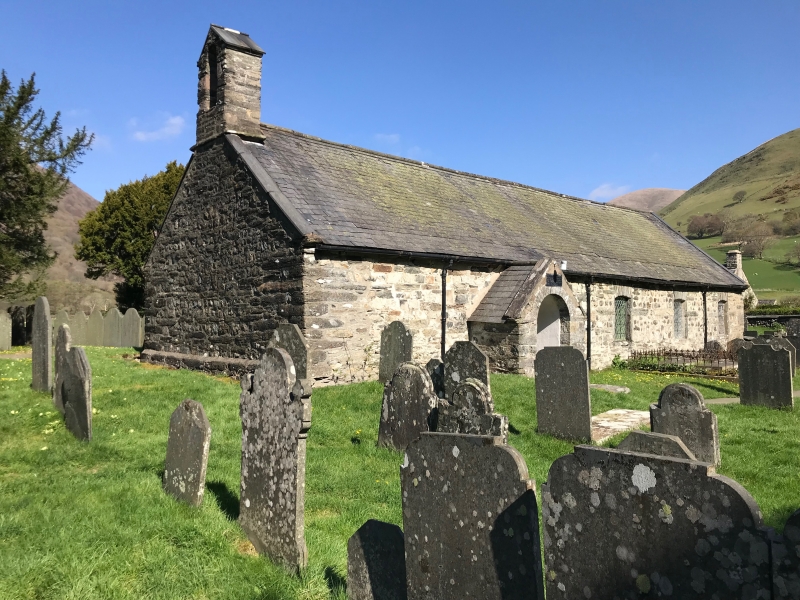 Location: The parish church stands on the valley floor of the upper Dysynni valley, within its own sub-oval churchyard.

The banked oval churchyard suggests the church has a Celtic origin, although another early church appears to have existed at Ffridd Ty-n-y-fach to the N. The present building was probably first erected in the C12, and altered at various times throughout the medieval period, including a probable lengthening of the chancel, and the addition of a transeptual chapel in the late C15 or early C16. In the late medieval period it had a chantry chapel and priest. An undistinguished screen was present in 1914. The church was restored in 1871. William Owen-Pughe, the famous Welsh scholar and lexicographer was born in the parish, and the church is noted for its association with the devoted child Mary Jones.

The long, low building is built of rubble stone with a slate roof between raised gables. It consists of an undifferentiated nave and chancel, with an added N transeptual chapel, and a small S porch. A small gabled bellcote stands on the W wall with a bell of 1746. The shallow porch is gabled, and has an outer open arch extended back to the church wall as a whitewashed barrel vault. The chapel is built of larger rubble, with a coped N gable. The tall N door opening is probably C17 or C18; a voussoired segmental arch with chamfered arrises and hood moulding, the door boarded and with diagonal boarding above. On the E wall, a 2-light C16 window, with sunk triangular spandrels. The nave has 3 windows on the S side; late C16-C17 voussoired segmental heads, probably contemporary with the N chapel doorway, each with 'long and short' stone jambs, and glazed with diamond leaded glass. On the N side, a narrow rectangular window towards the W, and a window as on the S side angled at the junction with the chapel. The Gothic style E window is of c1871, 3-lights with a quatrefoil head and hood mould. Set in S corner of the E wall, an inscribed tablet relating to the adjoining table tomb.

The nave is of 7 roof bays, mostly C19 arch-braced collar beam trusses with apex raking struts, probably a loose interpretation of the C15 trusses and incorporating some original timbers, although the W truss appears to be largely original. Two tiers of purlins. The E bay is underdrawn by a boarded vault. Plastered walls and boarded dado, higher around the chancel. Central quarry-tiled aisle leading to a step up into the chancel, and a further step into the sanctuary, which has a more decorative encaustic tiled floor. The N chapel, now the vestry, retains its original C15-early C16 arch-braced collar beam roof of 3 bays, supporting 2 tiers of purlins, and having small cusped windbraces. Slate floor raised one step above the nave.

Fittings: font, C12, a lobed square bowl set on a shaft on a similarly lobed base. Pulpit, reading desk and other fittings of 1871, including the simple communion rail.

Monuments: on the E wall, to the right of the altar, a fine slate panel with moulded sides and cornice arched at the centre, carrying a demi-relief urn, to Anne Owen, wife of Hugh Owen, d.1728, the inscription in Latin. By the entrance door, a C18 tablet to remember the poor.

Furniture: a small late C17 or early C18 table of oak, the front legs turned, probably the original communion table. The vestry has a large and remarkable fabric and stitchwork relief map of the Bro Dysynni, made 1992-1995.