A Grade II* Listed Building in Llaneilian, Isle of Anglesey 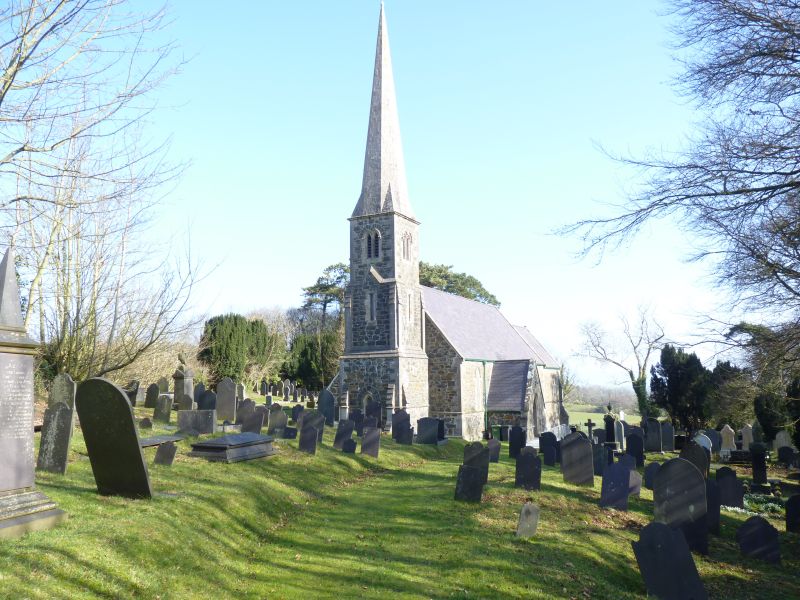 Location: Set back, within an irregularly shaped churchyard, from the W side of a country road between Nebo and Traeth Dulas; to the SW of the former Llys Dulas estate.

Mid C19 church, built in 1856, by Henry Kennedy, Architect of Bangor. The cost of building the new church at Llanwenllwyfo was £1417, all of which was collected from donations, the largest donation being that of £936 donated by Gertrude, Dowager Lady Dinorben (1807-71), second wife and widow to William Lewis, 1st Baron Dinorben and owner of the nearby Llys Dulas estate. The foundation stone was laid by her daughter, Gwyn Gertrude Hughes (1845-1916) in 1854 and the church was opened for services in 1856. In September 1871 Gwyn married Sir Arundell Neave, 14th Baronet of Dagnam Park, Romford, Essex, who presented the C15 and C16 Flemish stained glass to the church in 1876, a year before his death. When Gwyn died in 1916 she was interred under the chancel in the church alongside her mother; the walls of the church are adorned with 3 funeral hatchments, one bears the arms of the 1st wife of the 1st Baron Dinorben, the 2nd bears the arms of Gertrude and the 3rd, Gwyn's, bears the Neave arms.
The C15 and C16 Flemish stained glass was originally collected by Thomas Neave and inherited by his son, Arundel, upon his death. When Protestants took over Roman Catholic churches they removed and sold glass which they considered theologically unsound. A buyer was called Hampp. He was a German cloth merchant who had settled in Norwich and traded with Flanders. He sold panels of the ancient glass to the English Gentry and as well as the glass at St. Gwenllwyfo examples are found at the Victoria and Albert Museum in London, The Burrell Collection in Glasgow, in Washington U.S.A. and the Metropolitan Museum of Art in New York. The source of many of the panels in Llanwenllwyfo was a Carthusian Monastery in Louvain in Belgium.

Gothic revival church. Nave of 4 bays with 2 bay chancel, W tower in 3 stages with ashlar broach spire and SW gabled porch. Built of rubble masonry with gritstone dressings, including continuous sill band and raking plinth; dressed quoins. Slate roof with stone copings, chancel with decorative iron ridge.
The ground floor stage of the W tower has offset angle buttresses; a single window in the W wall has the continuous sill band of nave and chancel raised as hoodmould over. Raking stepped cornice up to middle stage, each outer facing wall with narrow rectangular light; engaged pilasters echoing buttresses at angles. Bell stage over shaped string has paired louvred lights with hoodmoulds to each face. Tower is surmounted by a tall ashlar spire.
The nave has single and paired pointed arched windows with hoodmoulds; the S wall of the chancel has similar windows with facial stops to the hoodmoulds, the N wall has a single trefoil-headed window with hoodmould with facial stops. The chancel E window has 3 trefoil-headed lights with cusped tracery in a pointed arched frame; hoodmould with floriate stops. Offset to the L (S) of the window is a blocked doorway which has a lambs tongue stop chamfered jambs; E end of the chancel with offset angled buttresses.
The SW gabled porch has a pointed arched entrance of 2 broach stop chamfered orders; flanking angle buttresses.

The nave is of 5 roof bays with an exposed roof of arch braced collared trusses down to wall posts on shaped corbels. Pointed arched doorway to west tower vestry. The chancel is raised by one step and has closely spaced braced collared trusses. The chancel arch is pointed with broach stop chamfered angles and a hoodmould with facial stops; the inner arch is moulded with floriate capitals on engaged pilasters set on shaped corbels. The sanctuary is raised by 3 steps with a moulded sanctuary rail on cusped crossed braces and stick balusters. Fittings are mid C19.
On the N wall of the nave is a monumental brass plaque reset from the E wall of the old church. The plaque shows Richard Williams and his wife Marcelie, their daughter Anne and their two sons William and Griffith; all kneeling in an attitude of prayer on cushions with tasselled corners. Above them are 3 heraldic shields, showing the characteristic Welsh practice of ascribing different arms to father and son, emblazoning both on the arms of their descendents. Below the figures is an inscription in Roman capitals.
There are also a number of marble memorials dating from mid C19 to early C20, all commemorating members of the Neave, Hughes and Dinorben families of the Llys Dulas estate; and a slate slab foundation stone laid by Miss Gwen Gertrude Hughes of Llys Dulas, 1851. Also adorning the N and S walls of the nave are diamond-shaped coats of arms of the Llysdulas family. These are funerary hatchments which were placed on the front of the mansion when a member of the nobility died. They stayed there during the lying in state and were afterwards brought into the church. They are the hatchments of Lord Dinorben, Lady Dinorben and Sir Arundel Neave.
The most notable feature of the church is the collection of C15 and C16 Flemish stained glass panels, 27 in all, which have been set in the windows of the nave and chancel.
The E window has a cinquefoil light in the apex made of fragments of glass from a memorial chapel to Pope Adrian the 6th at Louvain, flanking trefoils below depicts angels with musical instruments. The main 3 lights of the window are composed of a number of separate panels, the central light shows the Cruxifixion with the Holy Trinity above and the Arrest of Jesus in the garden of Gethsemane below; the L light depicts Jesus being brought before the High Priest over the 'Adoration of the Magi', the R light shows one of the stations of the cross over a rare 'Return from Egypt' panel.
The other windows in nave and chancel are composed of one or two of the panels set inside the frames. The chancel windows include panels depicting 'The Virgo Lactans', Mary Magdalen washing Christ's feet, the raising of Lazurus and a very rare depiction of the resurrected Jesus wearing a straw hat. The nave windows include a fine example of a design by Bernard van Orley, court painter and prolific designer of tapestries and stained glass etc at the court of Margaret of Austria, Regent of the Netherlands at Malines, then called Mechelen. It shows wealth, ignorance, envy and militarism mocking Christ in the palace of the high priest. Other windows include Saints and Prophets, The Holy Family and Agnus Dei, the Lamb of God who was slain for us. This is the oldest piece of glass in the church, York glass of the late C14 or early C15; most of the other panels show characteristic Flemish motifs and were made in Malines about 1522.

Listed as a mid C19 Gothic revival church closely associated with the Llys Dulas estate. The church is notable for its fine collection of C15 and C16 Flemish stained glass panels, the second largest such collection in the world, and also its early C17 brass memorial plaque.