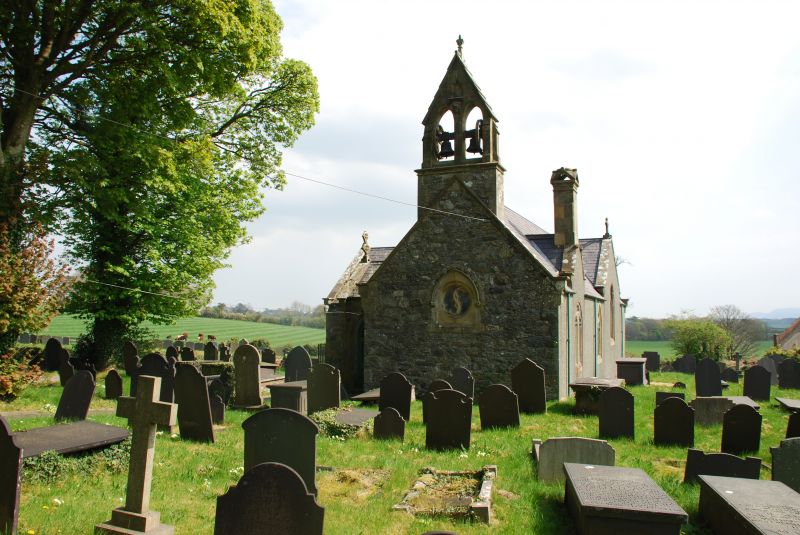 Location: Set back from the E side of the road through the village of Llansadwrn.

The present church was rebuilt on the foundations of a Medieval predecessor to designs of H Kennedy, architect of Bangor, in 1881. The nave and chancel probably represent the extent of the original church; the earlier church was described by H Jones in 1847 as having a chapel, which may be the N chapel of the present church, which is of uncertain date. The N porch is a later addition. In 1896 the chancel was either still being built, or was re-roofed and refitted from designs by Demaine and Brierley of York.

Predominantly late C19 rural church comprising continuous nave and chancel with N chapel and N porch. Built of local rubble masonry with mainly sandstone dressings and large stones as quoins; S wall grit rendered. Slate roof with stone copings on shaped kneelers, gable cross finials and dressed stone W bellcote for 2 bells; tall stack over westernmost window along S wall.
The E window is of 3 trefoil headed lights with cusped tracery in a chamfered pointed arched frame. The continuous nave and chancel of 4 unequal bays, the S wall with gabled bays over paired cinquefoil headed lights in arched windows; that to L (W) more round-headed and with tall square stack at gable apex. Alternate bays have pointed arched windows with trefoil headed lights; a paired light between the gabled bays and a single light to R (E). The N wall has a similar paired light between porch and chapel and the W gable has a circular window of cusped tracery set in a pointed arched frame which has a hoodmould with floriate bosses. Entry to the church is through a pointed arched chamfered doorway in the W wall of the porch, a single trefoil-headed light in a pointed arched chamfered frame in the N wall. The N chapel has paired trefoiled lights in a pointed arch frame in the E wall and paired cinquefoiled lights in a similar frame in the N wall; below the N window is a blocked low arch and flanking the window are shaped late C15 or C16 kneelers; that to R (W) a muzzled bear, that to L a human head.

The roof has exposed arched braced collared trusses, the nave has 5 roof bays, the chapel 3; some of the trusses are original. There is no chancel arch, the chancel is raised by a single step, the sanctuary a further step and the sanctuary roof is a highly ornate painted barrel wagon roof of recessed panels bearing the names and emblems of the saints between moulded gilded dividers with ornate floriate bosses at intersections. The facing panel of the roof is painted with floriate emblems and intertwined foliage.
The sanctuary rail is moulded and stands on twisted stanchions with floriate brackets. The E wall is panelled, the topmost tier with cusped tracery, the central with linen fold decoration and the lowest panel plain and behind the altar there is a highly ornate painted reredos, the central raised panel bears a depiction of Christ at the Crucifixion the flanking panels contains depictions of the 4 national saints; St David and St George to L and St Andrew and St Patrick to R. Above the panels is an ornate frieze with a central crown and flanking heraldic emblems. The floor of the sanctuary is tiled with encaustic tiles, and set into the N wall is an early C6 stone which bears a mutilated inscription in debased Roman capitals: HIC BEAT********** / SATVRNINVS SE****** / IACIT . ET SVA SA**** / CONIVX . PA .... Above the stone, and to L are late C19 memorial tablets, to R is memorial to Elizabeth, 2nd wife of Richard Wynne of Penheskin d1714: a draped mural tablet surmounted by a lozenge of arms and surrounded by flower and trumpets, below is winged cherub over a smaller tablet beneath, which is another lozenge with the arms of Iarddur for Wynne of Penhesgyn. On the opposite (S) wall of the chancel there are late C19 memorials to members of the McCorquodale family of Gadlys, including a highly ornate painted marble memorial to George McCorquodale d1895 which bears a helm and shield of arms surmounted by a stag set in a cusped frame with floriate decoration in the spandrels and bosses around the surround.
There are numerous reset C18 and C19 memorials set along the walls of the N chapel:
Along the W wall are a series of memorials set within a pointed recess to the family at Trefor: to L a slate tablet to Thomas Prichard of Trevor d1743, Grace Hughes his mother d1727, his daughter Grace d1731, and his widow Perie Parry d1771; to R top is a slate tablet to Richard Thomas son and heir of Thomas Pritchard of Trevor d1775, below is a marble memorial to Hugh Thomas Esq of Trefor d1852, below that a tablet to William Hugh Thomas d1896 and his wife Ann d1880 and below that is a slate tablet to Owen Thomas 4th son of Thomas Prichard d1747, and Hugh son of Hugh Thomas of Trefor d1779; to their R is a slate memorial to William Thomas, 2nd son of thomas Prichard of Trevor d1759.
In the NW corner of the chapel are a series of early-mid C19 marble on slate memorials to the Owen family of Gadlys. To the R of the N window of the chapel is an ornate marble memorial, a draped cartouche flanked by winged cherubim to Owen Roberts of Caere d1710/11, Ellin Roberts of Castellior, his mother-in-law d1702, and Thomas Roberts her second husband d1709; an additional tablet below and shield of arms above Iarddur for Roberts of Caerau.
To the L (N) of the E wall of the chapel is a corbelled memorial to Owen Lloyd, Chancellor of Bangor and Prebendary of Penmynydd, d1742; below is a late C19 tablet to Williams of Trefor and below that is a wooden tablet to Ellen, wife of Thomas Roberts of Castellior, d1702. To R is a pointed recess which contains early - late C19 memorials to the Williams family of Treffos; and to R of the recess are 2 small mid C18 bronze bequest tablets set high in the wall.
The fittings are predominantly late C19 and include an intricately carved reading desk, the seat of which bears a carving of a figure wrestling with 2 dragons; the arm rests surmounted by slumped figures with their heads resting on their hands.
The font is of Penmon limestone, with an octagonal tapered bowl, conical shaped stem with moulded base; dated 1737.
The E window shows Christ and the apostles. In the N wall of the nave, to E of the doorway is a window bearing depictions of St Alban and St Aaron to Hugh Stewart McCorquodale, killed in action in Spion Kop 1900. The S wall has 4 windows, which from W to E bear depictions of, and are dedicated to: Christ healing the sick, to George McCorquodale d1895; Angels holding aloft banners to Catherine Martha, daughter of John Roberts AM Rector and wife d1851; St Luc and St John to Elizabeth Jane Winter, wife of John Williams of Treffos d1856 and at the far E end is a window by Jones and Willis of St Sadwrn to TNW d1901. The N wall of the N chapel has a window of St Matthew and St Mark to Owen Owens d1847 and the E wall another window with angels carrying banners to Mary Elizabeth, wife of Thomas Noris Williams of Treffos d1830.

Included at Grade II* as a late C19 rural church with a well-detailed interior which includes many fine C18 and early C19 memorials as well as a reset C6 inscribed stone. The chancel has an exceptionally fine late C19 roof and reredos of a unique type on Anglesey.