The Bull Hotel, including stable courtyard to rear.

A Grade II Listed Building in Llangefni, Isle of Anglesey 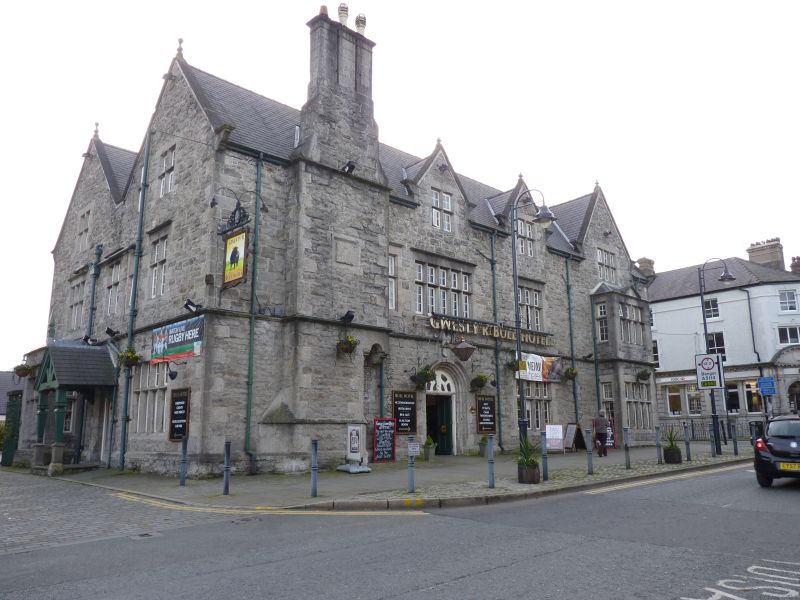 Entry Name: The Bull Hotel, including stable courtyard to rear.

Location: Located at the SW corner of Bulkeley Square with side elevation to Glanhwfa Road.

Large Victorian Inn, built in C17 vernacular style. Faced with Limestone rubble, freestone dressings with rough facings. Slate roof with raking gable parapets on kneelers, and gable apex ball finials. Built to an L-shaped plan, the main part of the Hotel a double-depth, 3-storey building, with a full-height gabled wing to the right (W) rear. The gabled wing is abutted by the lofted tackrooms and servants quarters which form one side of the U-shaped range of outbuildings to the rear of the Hotel; the opposite side is formed by a lofted stable range, linked to the tackrooms by a single-storey range of coach-houses.

The principal, entrance elevation faces N; 4-bays with lateral chimney breast projecting to left, partly corbelled over ground floor and with weathered stone tablet at first floor, volute supports above eaves band and triple stacks with moulded caps. Three gabled dormers with largest to right over pedimented 2-storey rectangular bay window. The entrance is in the second bay from the left; recessed under a moulded label, a small paned iron semi-circular fanlight over boarded double doors. Windows are small-paned casements in freestone mullioned and transomed surrounds, first floor windows with flat moulded labels. There is a continuous moulded label over the ground floor, raised in a small rounded arch over the entrance. A scrolled ironwork lamp bracket and Inn sign to first floor, left.

The return elevations are similarly detailed. To the right (W) side (along Glanhwfa Road), a 4-bay elevation with lateral chimney at the far right (S) and full-height staircase window with circular infill panels in the second bay from the left. To the left (E) side a twin-gabled return elevation; with central Jacobethan openwork timber porch with finial and rectangular bay window to ground floor left. The rear elevation is rendered on the first floor, the ground floor with splayed bay to the right; timber dormers to attics.

To the rear of the Hotel is a U-plan outbuilding range forming a courtyard; entrance with simple gates, decorated by simple scrollwork design to centre, top. The outbuildings are of similar materials, with gabled slate roofs, raking gable parapets on kneelers, and small gable apex finials. The outbuildings have been altered and modernised. The former servants lodging and tackrooms along Glanhwfa Road have gabled dormers to front and rear, deep stone lintels and timber casements. They are linked to an altered stable range opposite (on the E side of the yard) by a lower range of coach-houses.

Listed as a good, substantially complete example of a Victorian coaching Inn and courtyard range. The Inn is an ambitiously scaled and particularly well-detailed example of neo-vernacular design, prominently sited in the centre of the town, it also forms a group with the adjacent town hall and clock.