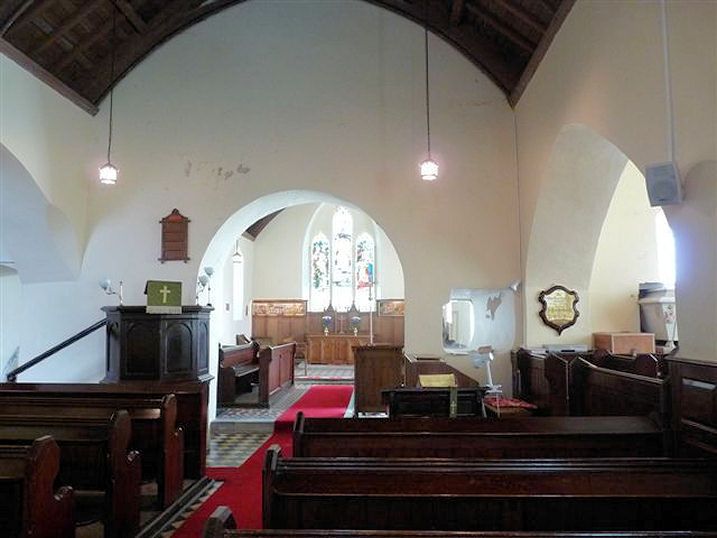 Location: At the W of Lawrenny village, at the entrance to the grounds of the former Lawrenny Castle.

A restored mediaeval church dedicated to St Caradoc (d.1124). Originally it probably consisted only of chancel and nave with bellcote. The round chancel arch suggests a C12 origin. In the C13 sedilia and a piscina were added, and trefoil-headed windows in the chancel. The transepts must be later again, as the passage squint to the N transept cuts one of the chancel windows; the passage also contains a tomb recess of the C14. A particular feature of the church is the very fine tower probably added in the C15. Prior to the start of restoration, Lewis in 1833 refers to the church as being in the Early English style with an elegant embattled tower. Freeman in 1852 also mentions the tower as 'one of the noblest of its type'.
Restoration work started in c.1860, early in the incumbency of the Rev. O T H Phillips: a gallery was removed and timber window frames replaced by stone. Glynne visited in 1867, noted the new pews and the plaster ceiling, and deemed the interior too modernised. He described the tower as fine and well-proportioned, and noted its battlements, pinnacles, corbel table and paired obtuse-arched belfry lights. The N passage squint he found to be blocked, but the tomb recess in it occupied by the sepulchral effigy of a cross-legged knight.
Towards the end of the Rev. Phillips' time in 1885 the main restoration was carried out. For this it was said in the Pembrokeshire Times' account of the opening that Mrs Lort Phillips of Lawrenny Castle had acted as architect, with the technical assistance of C W R Stokes, agent to the Lawrenny estate. Glynne's editor, however, writing in 1888, refers only to the designs of Mr Jackson. The contractors were Joshua Harries and Kelly of Tenby. The plaster ceilings were taken down and the church re-roofed. The church was re-paved and re-pewed. The sedilia, piscina and an aumbry were rediscovered and restored and the chancel lancets uncovered. Many new windows were inserted, including windows to the the tower. The church was re-opened on the 7th of January 1886. A porch was added in 1896 in memory of the Rev. William Jenkins.

The church consists of a nave and chancel, N Porch, N transept and vestry, smaller S transept and tower.
The tower masonry is in large courses of hammer-dressed stone with larger stones selected for the quoins; that of the remainder of the church is in local sandstone rubble. The chancel walls are battered at the foot. The roofs are of slate with tile ridges. There are coped gables to the transepts in Forest of Dean stone and that to the chancel is in Bath stone. Finial cross at the E.
The parapet of the tower is crenellated and has corner buttresses, all with copings or stumpy corner finials. Above it rises a low pyramidical roof topped with a weather vane. The belfry lights are close to the corbel table of the parapet, and are pairs of Tudor-arched openings on all four faces, probably original. Staircase turret at the NE corner. There are slit lights to the stairs. At mid height of the tower is a roll-profile string course, and there is a battered low plinth to the tower with a moulding. On the W face is a window in three Tudor-headed lights with a drip mould above. The clock on the E face is by James Walker.
An apparent buttress at the angle of the chancel and the vestry relates to the passage squint. The very large bellcote for two bells at the E of the nave has several corbels projecting from its base on the E side and its top is weathered in cement.
Early windows survive at the E of the S transept and in each side of the chancel: these are trefoil headed lancets. One at the N of the nave is mostly blocked by the early addition of a vestry. Most of the windows are of 1860 or 1885. The E window is three lights in Early English style with a simple label mould. To the S of the nave and chancel and in each transept are two- or three-light Decorated style windows in oolitic limestone. There are also lancet windows at the N of the nave, W of the N transept and E of the vestry. The doors in use are C19: in the N porch is a C19 door with good ironwork under an equilateral arch; the vestry door is also equilateral pointed; the door to the W of the S transept has a four-centred arch. There is a blocked S doorway to the nave with an wide pointed arch.

The interior has C19 open timber roofs of pitch-pine with arch-braced collar beam trusses. There is a low round arch to the chancel and low pointed arches to the transepts. The tower base is a vault fully open to the nave. The chancel is wide and there is one step up at the chancel arch and one more at the sanctuary. The S transept is known as the Lawrenny chapel. Its floor is two steps higher than the nave. In the nave there is a corbel of an earlier roof at the left of the N transept arch.
The tower lacks most of its original timber upper floors, but staging has been erected to support the clock mechanism. The timber belfry floor survives.
In the chancel there are two sedilia and a piscina with C13 trefoiled heads. To the left of the chancel arch is a large passage squint and to the right a window squint. Stoup recess at the right of the N door.
The paving of 1885 is a strong feature of the interior, of Webbs Worcester encaustic tiles, highly decorative in the sanctuary and more plainly ornamented in the main floor of the chancel and in the nave.
The altar is of oak, standing on a stone plinth. The panelled and carved reredos was donated in 1919, and has twin gothic features centrally. It is flanked by a tapestry frieze in two halves, illustrating scenes from the life of St Caradoc. Both the reredos and the tapestry are donations by the Lort Phillips family of Lawrenny. The pews, the pulpit at the left and the reading desk at the right all date from 1885. The pulpit and desk are by Halliday of Windsor. The pews are of deal, stained and varnished, with pitch-pine ends. A few of the 1860 pews survive at the rear. There is a boarded dado. Scraped Norman font on a circular pillar and a square base rounded at the top.
The window glass of 1885 by Ben Gay of Bristol is plain with coloured edging in the nave, and grisaille, with the arms of Lort Phillips, in the S transept. There are two later additions of high quality: the E window, in memory of J F Lort Phillips, d.1926, depicts the angel declaring Christ's resurrection at the empty tomb. In the N transept is a design with St Nicholas and St Gabriel, flanking a version of Holman Hunt's painting of Christ, the Light of the World (1904). This window commemorates Emmeline Dugdale, d.1909.
In the passage squint on the N side is an arched wall recess with pierced cusping, into which an effigy of a knight of the time of Richard I has been placed. The effigy was formerly in the open air, but its original location is unknown. Glynne refers to it already in this location by 1867.
The interior has good wall monuments. To the N of the chancel, a small bronze plaque to Elizabeth Jones, d.1630, in English and Latin. It shows a lady at a prayer desk beneath an arch; memento mori, skull and crossed bones. To the W of the chancel a Latin memorial to the Rev. William Jones, d.1698, with Elizabeth and their third son John; also a Baroque monument to Lewis Barlow, d.1681. This has two cherubs pulling apart curtains to reveal the plaque. It has an arched pediment. Barlow's tombstone in the floor is adjacent. To the E of the S transept is the sarcophagus monument of Hugh Barlow, d. 1809, with the arms of Barlow and Crespigny. It is cut into a recess below the window, beneath a cast-iron beam. At the W of the S transept is a Gothic monument to George Lort Phillips d.1866 and Isabella d.1914. In the N of the N transept a figured marble plaque to Abraham Warr of Little Pencoed d.1753 and Hannah d.1797.

Listed as a fine mediaeval church and tower; well restored in the late C19 and containing fittings of high quality.