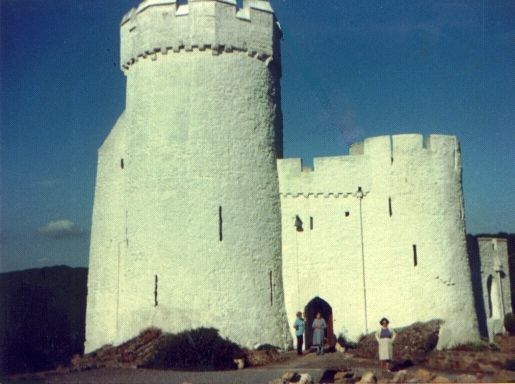 Location: Built on a spectacular position high above the W side of the Daugleddau some 2.3km NE of the church at Burton.

Small C13 castle with one tall round tower, and one smaller round tower each side of front. There was an irregular courtyard behind, much depleted, now rebuilt and roofed over. The main SW tower had no floors (originally timber), no fireplaces, no stairs in the tower walls but garderobe chutes. The entrance had no portcullis or defences. Its medieval history is apparently unrecorded. In ruins when painted by Sandby in 1779. Part of the Owen of Orielton estate at one time. The ruins had been stabilised before 1920 by the Scourfields of Williamston. Bought in 1932 by Ernest Pegge (1896-1940), civil engineer who repaired the castle as a house. After his death the work was completed by his nephew Dr Arthur V. Pegge, who built up and roofed the courtyard, completed by 1954. He was aided by J. A. Price, the county architect. Sold in the 1960s and further restored for Col. and Mrs J. A. Sulivan. Col. Sulivan was High Sheriff of Dyfed 1974, his wife a great-grand-daughter of Sir Hugh Owen of Orielton.

Castle, now house, whitewashed rubble stone. Tall narrow round tower to left of single-bay curtain wall to round tower with parapet little higher than curtain wall. Left tower has splayed base and corbelled octagonal embattled parapet, double corbels under angles. Two loops to ground floor right and centre left, two to first floor, left and centre right. On left side is big projecting tapered garderobe chute, square plan with steep pyramidal cap tapered off to point under corbels of main tower. Rough cambered-headed base opening and two small loops. To left of tower entrance bay has corbelled embattled parapet, first floor small loop and segmental pointed doorway with stone voussoirs. Round tower to right is without corbels and parapet has narrow slots between each wide-spaced crenellation. Four loops, spaced two at mid height, two at first floor. Behind and with much lower parapet level is main domestic range with flat roof behind embattled parapet. Canted corner. Segmental pointed windows at upper level (ground floor level on entry side): one in E end, one in canted NE corner and two set to right on long curved rear wall with a one to left and a small pointed window on curve to left over basement door. There are basement loops below most of the windows, square put-log holes and a basement pointed door to left on rear wall, set above ground level. The W end has projection similar to garderobe chute on main tower, three-sided with pyramidal cap. One similar window to each side of stair tower cap. Windows have C20 uPVC glazing.

Interior largely C20, the splayed plinth of main tower visible within small centre hall. Steps up to cambered headed broad entry into tower base. Inserted fireplace in base of tower. Steps up to first floor narrow cambered-headed door in smaller tower to left.

Included at II* for its historic interest and rarity as a restored small medieval castle.