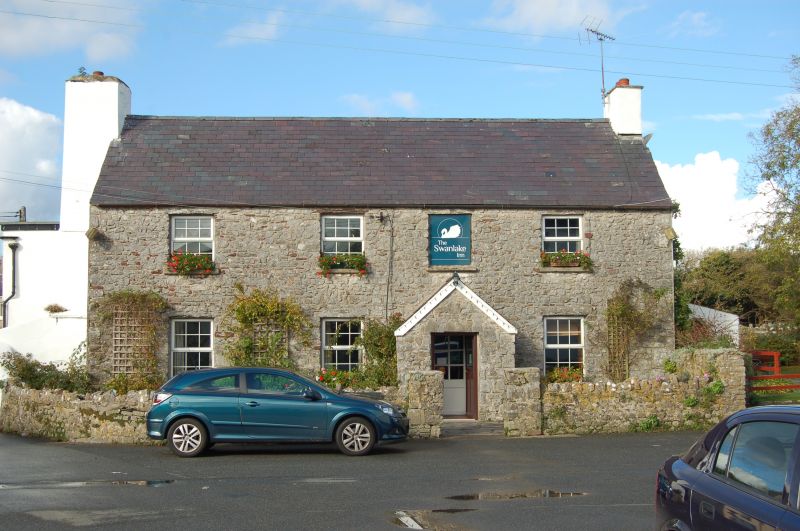 Location: Conspicuously located on an island in the centre of Jameston Village.

Evidence found during alterations indicates that the Swan Lake Inn was originally a single-storey 3-unit cottage facing S with a large end-chimney at the left end-gable, and that later it was heightened to the present 2-storeys, the chimney also being heightened. The front elevation stonework, however, appears all of one period. The main entrance is between the centre and right units. The rear wing extending N to the boundary is said to have been a cowshed and there was a small extension to the latter standing against the N boundary. As a public house it has undergone numerous further extensions.

In 1840 it was described as a cottage and garden owned by Thomas Stephens and occupied by David Lewis.

Two-storeys, range of 4-windows, the third upstairs being a blank panel now painted as an inn sign. This blank may have been a window to the stairwell. Front of local random rubble with larger stones selected for the quoins. Stone lintels over the openings (unusually locally). Other elevations rendered and painted white C20 windows. Slate roof with tile ridges. End chimneys. Porch with gable to the front.

Stone wall with gate piers at front. High boundary wall at side and rear, all in rubble masonry.

Interior: Entrance to a lobby between units and at foot of stairs. The stairs of T type with 2 short upper flights from a quarter landing. The rooms at left now opened up as a single room. The large hearth is in this room, with a replaced timber lintel. At the right of the hearth is a Devon cloam oven. An unusual air-duct runs from near the bar to the chimney, and is said to assist the fire to draw.

A small panel of reeds, used as a base for plastering, has been uncovered for display.

Listed notwithstanding replaced windows as the centrepiece of the village of Jameston and a building of character and historical interest.